For my final project, I wanted it to reflect what I was interested in as a student, as well as create an interesting and creative concept to 3D puzzles. What I landed on was creating a puzzle that turns into an object, and this object I chose is a brain. The main focus of this puzzle involves putting together the cerebrum of the brain, mostly because it’s the largest and main part of the brain, but also because its highly convoluted portion which allows me to increase or decrease difficulty of this puzzle.

When thinking about how I was going to create my puzzle, I was lost and had no idea where to even start. There are so many directions, so many ways to go about creating this puzzle that I could easily draw but I also have to think about how I’m going to use Tinkercad or other programs to print a work able final product. Its intimidating, so I took a step back and just looked at pictures of brains and their anatomy and what material I was going to use to create this prototype. This was a good place to start.

How I plan on creating my prototype is by using clay. Specifically, I used Model Magic by Crayola which is basically artificial clay little kids play with. I used Model Magic because it is cheaper, and I can buy it in small packs rather than in bulk. Model Magic was actually harder to use than actual clay, which I didn’t anticipate. It was hard to create pieces that didn’t permanently stick together, or fused together, when I laid the pieces next to each other. It was also harder to shape the overall structure of the brain. 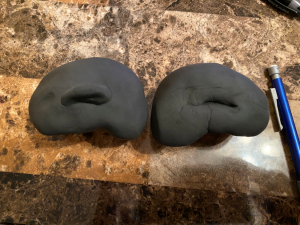 How I started was I tried to just make the brain without worrying about making piece or worrying about how to put it together in the end. My sister was sitting next to me and also tried to make a brain and in molding my own brain and watching my sister make hers, I came up with how I’m going to make my brain puzzle (part of it at least). The Cerebrum, the largest portion of the brain, is highly convoluted and has many creases. To use this to my advantage, I decided that as I was rolling out my strands or tubes of brain that cut them while laying them out on the brain, creating interesting pieces of the brain that also could be laid together much like jigsaw puzzle. 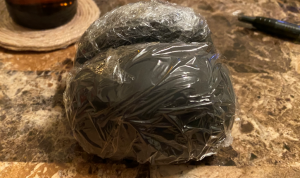 Originally, I was going to use this idea to create the whole puzzle, both the outside (cerebrum) and the inside (where the cerebrum pieces will be laid out on). I was also thinking that I could divide the brain into the four lobes of the brain, making each lobe the same way and having each piece fit into each other. I’ll likely create wholes that have a notch or something of that nature fit into it, connecting each lobe together.  I’m still back and forth on how these pieces will come together in the end. However, I’ve never played with Model Magic, and I don’t really know how it will hold or dry. My fear with this idea when creating a prototype is that the Model Magic would not be able to hold itself like this dry. 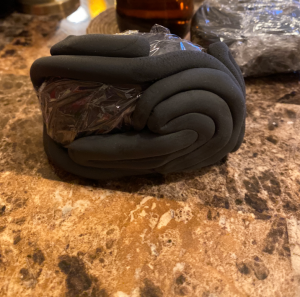 For the sake of the prototype and to see if this idea would work or look good, I focused mainly on the cerebrum. I did this by creating two separate balls of clay and shaped it into the hemispheres of the brain. I wrapped each ball in saran wrap because I didn’t want the pieces to stick to the balls, potentially ruining each piece when I try to remove it or change the shape.  I rolled out columns of clay and randomly added it to the saran wrap, till the whole brain was covered. Looking how it ended, I am pretty happy with how it ended up, and my plan moving forward is to keep going with this idea and create the four lobes with this process. I want my whole puzzle to come together using this technique and will experiment with whether that will work or not. I only have the outside prototype completed but will be updating the prototype as I go along. 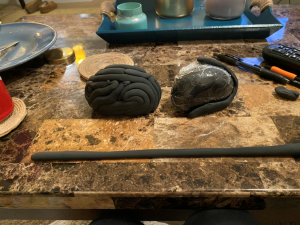 How I plan to make this puzzle is by creating the pieces out of clay and 3D scan it into an STL file and adjust the file as needed prior to print. However, one part of my puzzle that I believe will have many test runs is the inside part of the brain, where the rods will sit on. This will be the most difficult because I still don’t know how I’m going to create this part of the puzzle and creating the ideal shape of the brain is going to be difficult. I first focused on getting the shape of the brain first. I wanted to see if I could create a shape that was similar enough to what I wanted and then focused on creating the puzzle part. What I did to create the shape was I put two spheres at the end of cylinder and grouped it together, then adjusted the overall size till I was happy with its size. 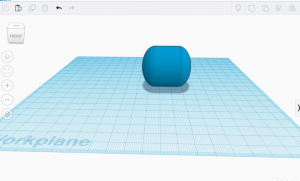 I printed this out as the initial test because I wanted to see whether or not I liked the shape or if I should readjust its size or even try a different shape all together. Quiet honestly, I don’t think I like the shape that I originally landed on, however, instead of re-printing a different shape, I took what I thought I should change and applied that into the puzzle form of this part.

What I didn’t like about the shape was that the top was too flat. The brain has a slight curve at the top that I didn’t take into account when using the cylinder. How I fixed this was I took a half cylinder shape and put it on top of the cylinder. From here I decided to make a rough, less complicated puzzle. I did this because I wasn’t sure how I was going to create the pieces, while still retaining its shape, and also because I’m still not sure this is the direction I want to take this part of the puzzle. It seemed like a waste of time to create intricate piece when, for right now, larger less intricate pieces could help me decide the direction I want to take this.

The way I set this puzzle up is I used three half cylinders, two on their sides, and used a cube with three notches as the center piece to hold it all together (the blue and the red pieces). I adjusted as needed to allow for errors and space for each piece to set in. 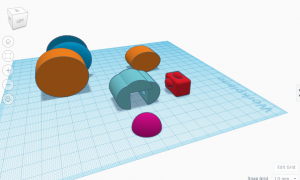 With regards to the shape, I think adding the additional half cylinder to the top of it was a step in the right direction, yet I still am not 100% happy with the way it turned out. Now the top is almost too curvy and doesn’t really come together with the rest of cylinders as well as I thought.

Part of me wants to change the whole format of the puzzle to which instead of having two separate puzzles, one resting on top of the other, that I might have it all be one puzzle and have it build on top of its self. I think this will be the easiest way to get the shape that I am looking, while creating a fun and complicated puzzle. I’ve even considered taking out the inside puzzle and just having only the outside folds be the only puzzle. This will likely be my next experiment and will also give me an opportunity to see how the 3D scanner works as well.