For this week assignment we were supposed to come up with 50 figures designed by ourselves in Tinkercad. I´ve divided my project in three different designs that I will show up right now. 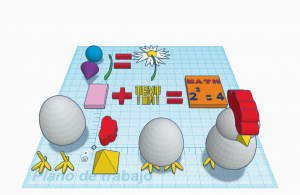 In the first design I’ve worked in three different compositions. The first one (forms 1-4) is a daisy flower. By grouping a cone and a sphere, I was able to make the petal of the flower. Furthermore, by duplicating and rotating that petal I could make it around it and put another sphere in the middle. In order to make the tail, I chose a a ring and two cubes to finding the segment I needed.

The second figure is a math notebook (forms 5-7). This figure was made by grouping a cube with the proper text and numbers.

Finally the last figure is a chicken (forms 8-13). I started with two chicken legs. On top of it I placed and egg and on top of the egg a sphere. The crest of the chicken I did with a heart by duplicating, rotating and grouping it. The last step was to place the peak, which was made with a pyramid. 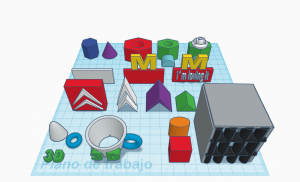 This second design I started by doing some holes and different staff with the figures as you can see in the background of this design (forms 14-18). I worked with different figures by making holes in them, placing things on top, etc.

The second figure is the McDonald’s symbol with the popular phrase “I´m loving it” (forms 19-21). In order to build this logotype I started with a cube, placing the M letter on top of it and inserted the phrase in the cube.

The third figure is the Citroen symbol (it is a brand name of a car). I started this figure (forms 22-25) with the ceiling figure and by making the hole in it. I could make the characteristic symbol of this brand. Finally I placed one on top of the other and placed both in a cube.

The fourth figure we can see is the cup (forms 26-29). I made this figure by cutting the paraboloid, making a hole in it, adding the words “3D printing” in it and placed a handle with the toroid figure.

The last one of this design is a jail cell (forms 30-32). Using the cylinders as the bars and the cube as the wall of the cell, it wasn’t very difficult to do. 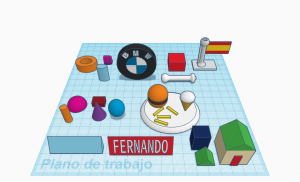 The figure in the last design took me the longest and the one of which I´m very proud of. I´m talking about the BMW symbol (forms 33-36). I started with the tube figure. After I had to cut the cylinder into 1 quarter of it and duplicate it four times so I could do the inside part with the proper colours. The last step was to place the letters into the design.

The next figure is a flag of my country (forms 37-39). It doesn´t feature any sort of mystery, it was pretty simple.

The next figure is a pretty standard house I made with a roof and a door (forms 46-48).

FInally I did a sheet with my name (forms 49-50). Inserting the text in the figure.

The three links to Tinkercad: