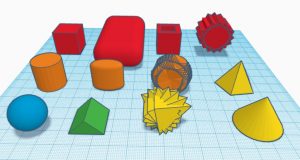 For the first 12 shapes I played around with the duplication tool and made some very interesting shapes. I also messed around with the amount of sides that certain objects such as the pyramid and the cylinder had. I also rounded the edges on a cube, and made a hole inside one of those cubes. 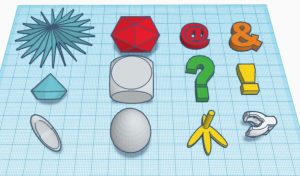 For the next set of forms I borrowed from more complicated objects and symbols. I played around with the radius and the amount of sides of the star, as well as stretched out some of the punctuation symbols.

I then practiced inserting the text object, as well as played around with multiple rings and hoops. As well as the donut shape, varying the thickness and the size of the radius. I then uploaded a clip art of a jet, and used a honeycomb object to create a pattern upon the plane. I also added multiple community objects such as the fidget spinner and various bridge shapes. In the bottom and final image I used google images to upload an Air force logo, which looks much better than the one I tried to make by hand. I also played around with community mountains, changing the amount of peaks and the height of such. The last image I uploaded was a very simple car, and I used a maze object to create a pattern throughout the car. 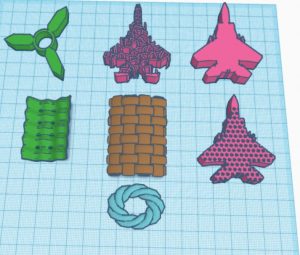 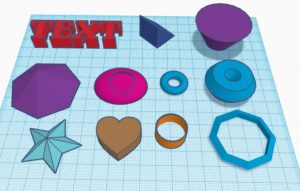 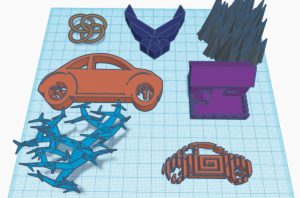