This week, my assignment was to create 50 unique forms. I started small and worked my way up to creating some more complicated things, and it was a bit of a learning curve at first but I think I’ve learned a lot about Tinkercad! 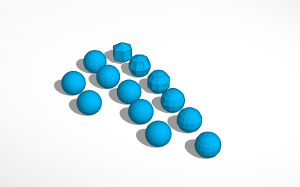 I started extremely simple by just seeing how many different kind of spheres I could make simply by adjusting the amount of layers each shape has. The result was pretty unsurprising, but I still think it’s cool to see the gradual evolution. 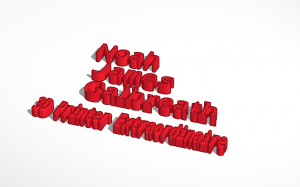 Next, I tried messing around with the text and using different fonts as well as adjusting the size. 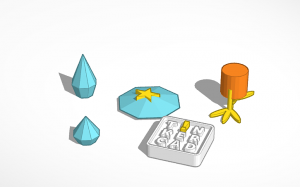 I tried manipulating a few more shapes as well as fusing certain objects together and getting some ideas for what I could create with multiple items. I attached the chicken legs to a sphere to see how they’d look spaced apart from each other if I later decided to make an actual bird or chicken. 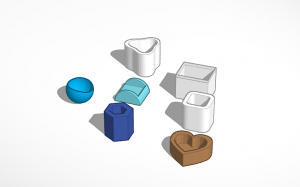 I experimented a lot with using holes in these forms. I was able to make various containers mostly by creating a smaller hole shape and grouping it with the original larger shape although I did experiment with making holes using different shapes as well. 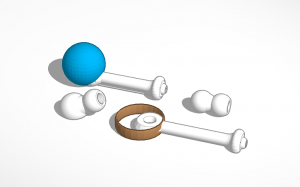 This was another experiment with grouping objects in which I used some preformed connectors and joints and attached shapes and an extra hoop to hang things on. 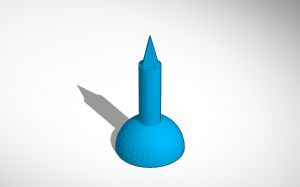 After some of my experimentation with multiple objects, I moved on to creating bigger “more complicated things”. I made this golf tee by connecting a cylinder, pyramid, and sphere that I chopped in half with a square hole. I could’ve just used a half sphere but I didn’t actually realize that until after I was already done. 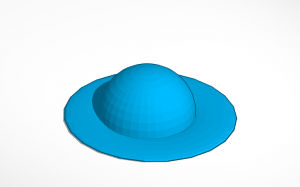 Next, I created a bowler hat that kinda just looks like half of Saturn but I was going for one of those old fashioned bowlers. I hollowed it out inside using a sphere shaped hole but you can’t see that detail in this image. 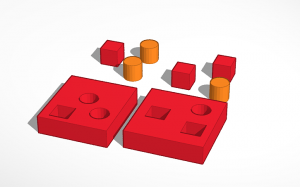 After that, I kept adding holes to things but more with the goal of attaching several pieces in mind. This form is supposed to be a replica of the children’s shape game where you have to fit the shapes in the right holes. 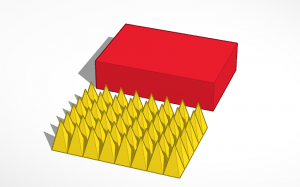 This form doesn’t serve much of a purpose aside from being satisfying to put together but it’s supposed to be a layer of spiky pyramids fitting into a box with pyramid shaped holes. Unfortunately the holes in the box aren’t visible in this image but I copied and pasted the layer of spikes and created a hole using it that I then grouped to the rectangular prism. 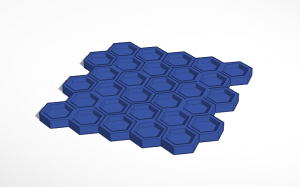 This form also serves no real purpose. It was kind of an experiment in grouping and copy and paste, but I managed to create a honeycomb structure by using a polygon and a hole of a polygon that was very short. 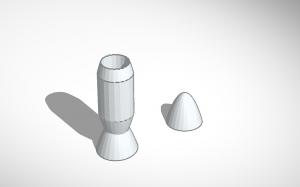 Next, I combined several shapes to create a lava lamp shaped container with a lid. This was created mostly by grouping paraboloids and hollowing out the middle with a cylinder. I created this form because I have a collection of over 11 lava lamps and I just really enjoy them. 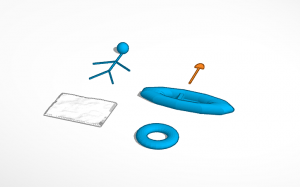 Finally, my last few forms were themed around going fishing because I made the canoe and thought I’d go from there. The canoe was actually made out of a stretched out ring shape, a stretched sphere for the bottom, and a stretched cube for the seat, and the oar and most of the stick man were created using long cylinders. I then created an inner tube and some “shoreline” to add a few more river related items. 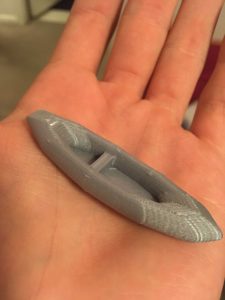 I really liked my canoe design so I decided to print that, and it turned out really nicely!