After a short discussion, we came to the decision to create a trophy. We were thinking about whether to create a R2D2 or to stick with the trophy. However, after a few tries of creating the R2D2 we realized that it would be very difficult to print out, so we changed our mind. After a quick search in Tinkercad, where we were able to find some trophy-designs, we came to the conclusion that it would be very difficult to print it in just one piece, most likely because of its small base and its complexity. This was one of the main reasons why we decided to add a bigger base to it, in order for the base to hold the entire figure.

The first step, as already mentioned, was to create the base for the trophy. We did that by combining some boxes and adjusting its size. In fact, the size of these boxes is decreasing from one to another. The final base-box has a space where we engraved the letters “3D-Champion”. Our idea was to give the trophy to the best project of the class as a reward.

The next step was to set a cylinder on top of the last box. Furthermore, we also created the main body-part of the trophy by cutting a paraboloid and turn it around. We added a ring on each side, which allows you to grab the trophy. Moreover, we put a sphere on top of the trophy for decorational purposes. Our last detail was to add some symbols in terms of the U.S. country and the european map into the trophy to show that the one who receives the trophy is the world champion!

Our idea was to print it all out in one piece. We were wondering about some problems we might have; like the rings it has on the sides. We will continue working on it to make it the best project possible.

Below we have some photos from the first draft: 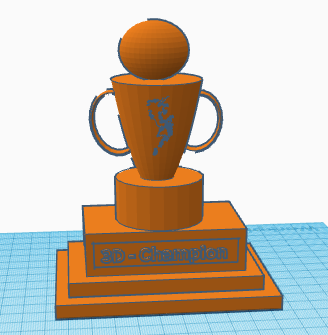 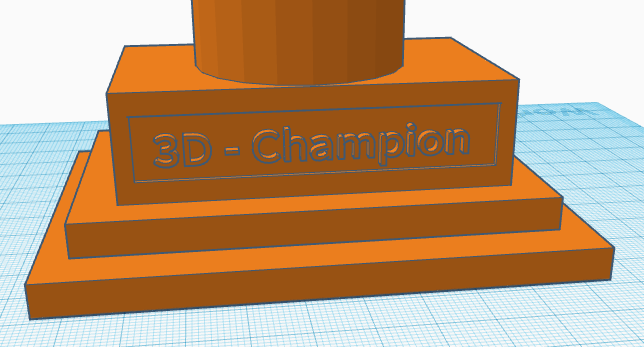 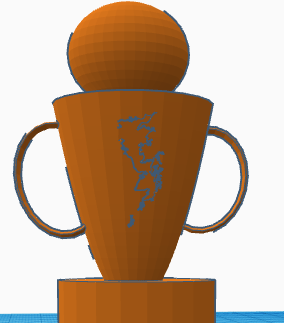 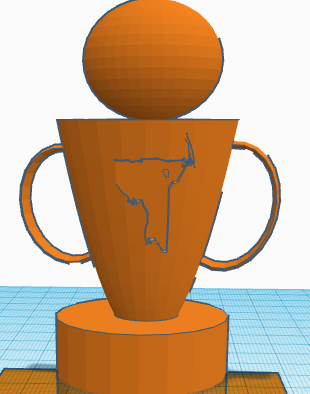 During last class we tried to create our first draft print of the 3D Champion Trophy. We finished the class with very positive feelings about the project. Mrs. Taalman seems to like the idea of giving the trophy to the best group in our class and we think we did a pretty good job for the first draft. However, we try to improve our object as much as possible to fulfill Mrs. Taalman expectations in terms of “You have to push yourself in this project”.

The draft print we did the other day worked out pretty well. The entire figure was printed completely and it looked very cool. The trophy handles, which were the part we were most worried about, seemed to look very good and the trophy had a decent view.

Nevertheless, like in every first draft, we had to face some mistakes. Fortunately, we are able to correct for the next week’s class. The biggest mistake was that the first two boxes weren’t completely connected, so the trophy fell apart a few hours after printing. Besides this fact, we are also going to improve the handles so they don´t look the way they are now (they are very inconsistent).

To get a better view of what we’re talking about, we’ll attach some pictures of our first draft. 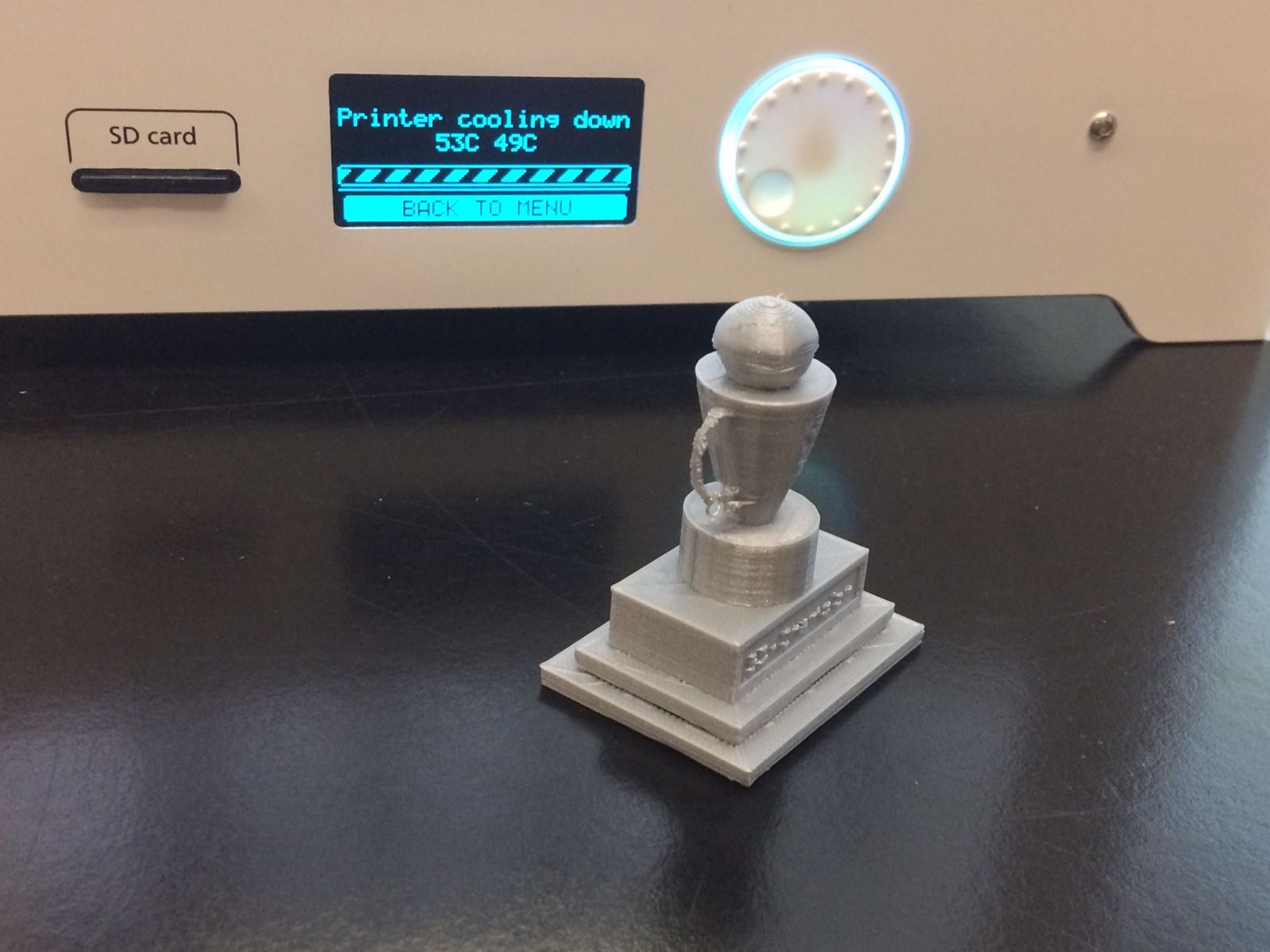 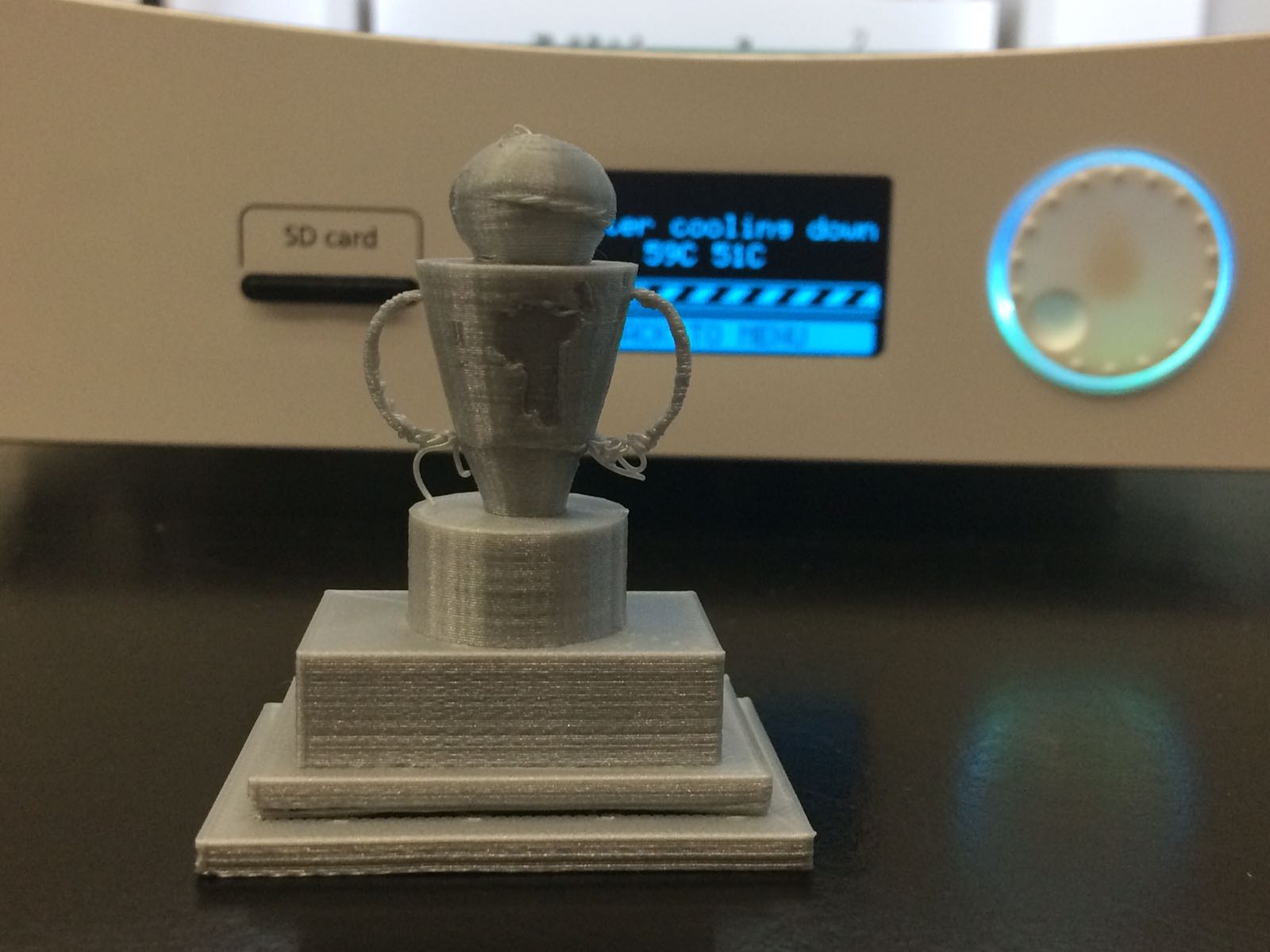 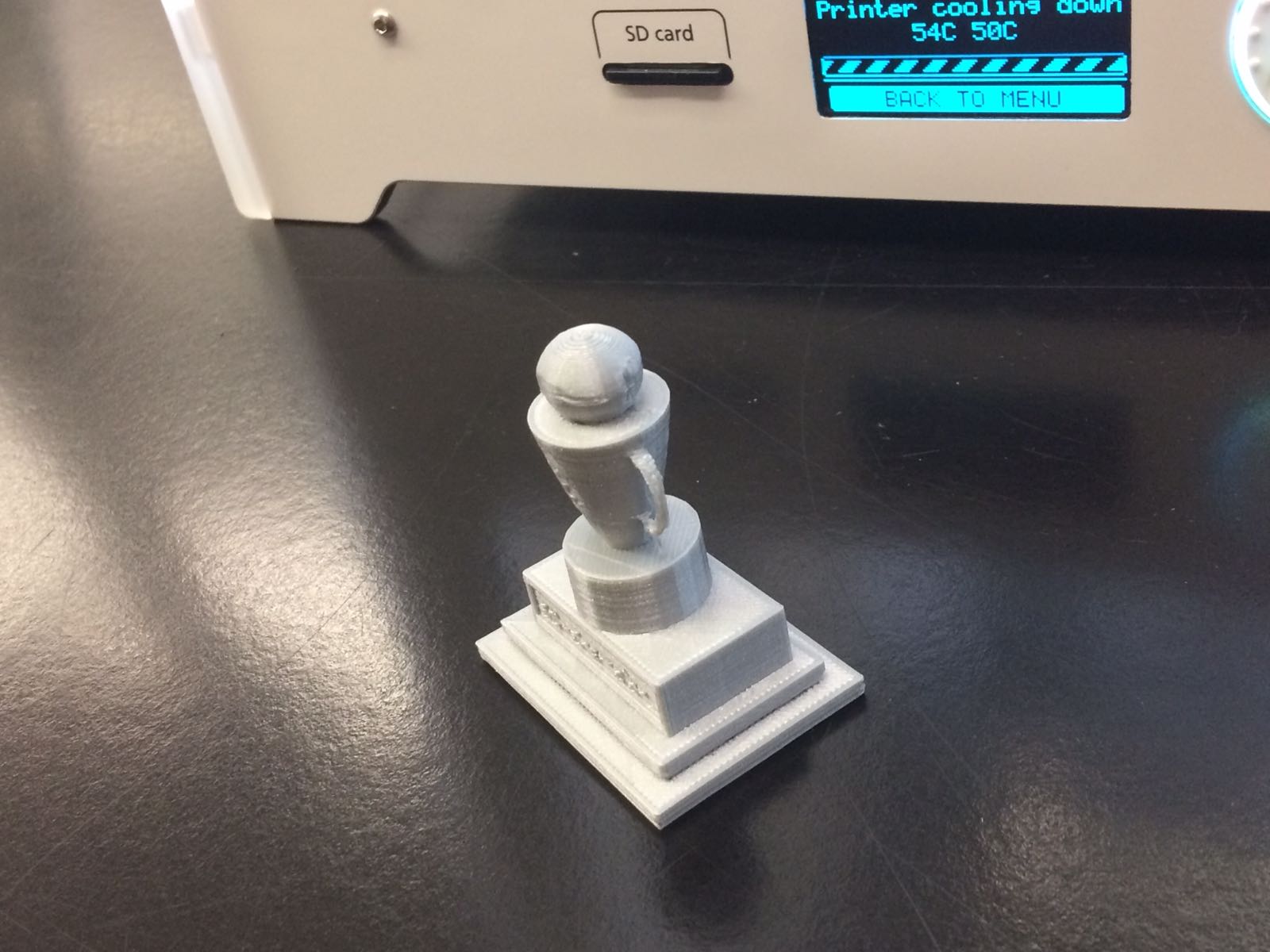 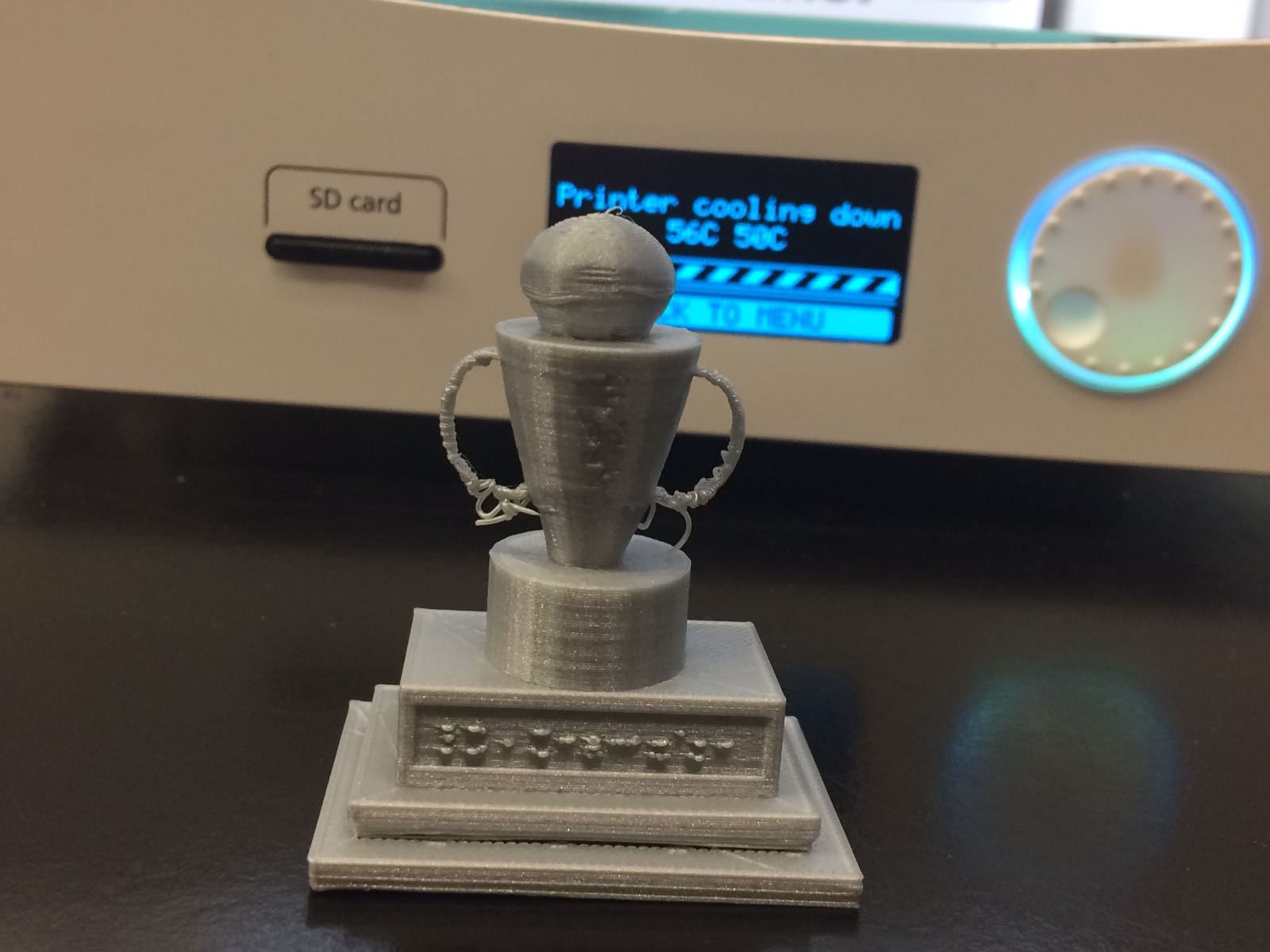 In this section we are going to show the progress we made in creating and perfecting our trophy from last week.

The first thing we did is changing the format of the base-boxes by cutting its edges and making it round and also less thick. The reason why we reduced its width is because we thought that reducing the size of the base could allow us to make a bigger trophy, which is the principal and most attractive part of the project.

We also changed the 3D Champion inscription we had on the base by making it bigger. Furthermore, we also included the year 2017 to show which year the champion would win this trophy (maybe in 2018 we have to give another one). In addition, we also imported a photo from Google of a 3D printer logo and attached it to the trophy’s base.

In accordance with what we wrote on the First Draft post we also worked on the handles of the trophy by making them wider and thicker, in order to not face the same problem we faced the first try. Moreover, we also corrected the gap which existed between the two boxes of the base (which was one of the problems from our last draft) by connecting them in Tinkercad.

Another aspect we worked on during this week was the semi-sphere on top of the trophy. We didn’t like its look that much. To sum up, we wanted to symbolize the world, so the person who wins the trophy looks like the world champion. We have taken a look to the World´s Champion Cup of Soccer to get an idea of it, whereas we took over an object from Thingiverse https://www.thingiverse.com/thing:17336 . By making the semi-sphere bigger, in order to feature the same proportion as the trophy, we also added the continents of the figure to it, which in our eyes gives the trophy a better look.

Finally, the last thing we worked on is making each component of the figure look smoother, so the impression, when we would print it in class, would be very positive.

We attached some screenshots from Tinkercad down here so you can get a picture of the adjustments we are talking about.  We hope you like it 🙂 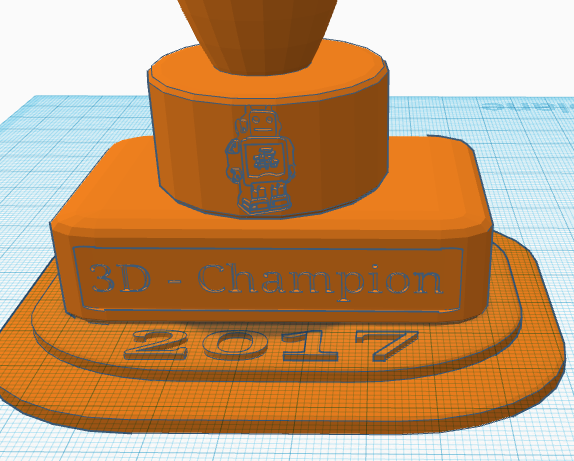 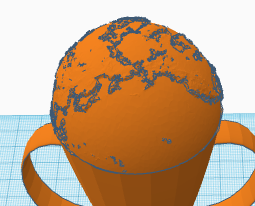 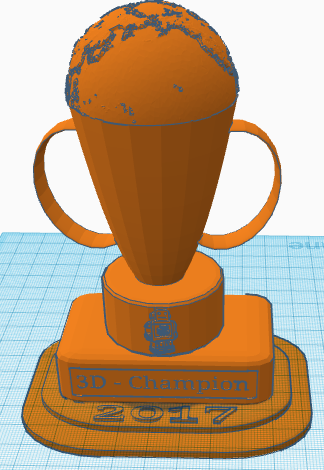 After seeing the printing results, we still had to face one problem. In fact, we adjusted the size and thickness of the handles even more because the printer only printed out one of the handles. Furthermore, to give it more a look like a real trophy, we decided to alter the trophy’s body part a bit. To be exact, we changed up the form of the body and with it also changed the form of the handles.

Attached you can find pictures of what we exactly were doing during the alter process. 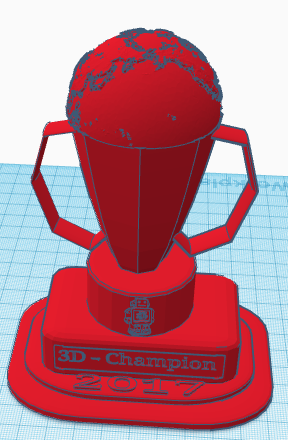 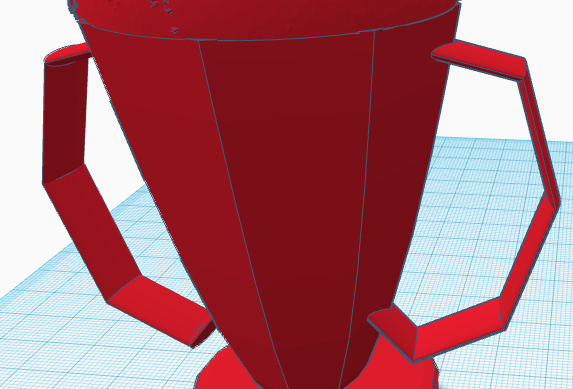 Here you can see our final print. The handles worked out pretty well and also the writing is clearly readable. We hope you guys enjoy it! 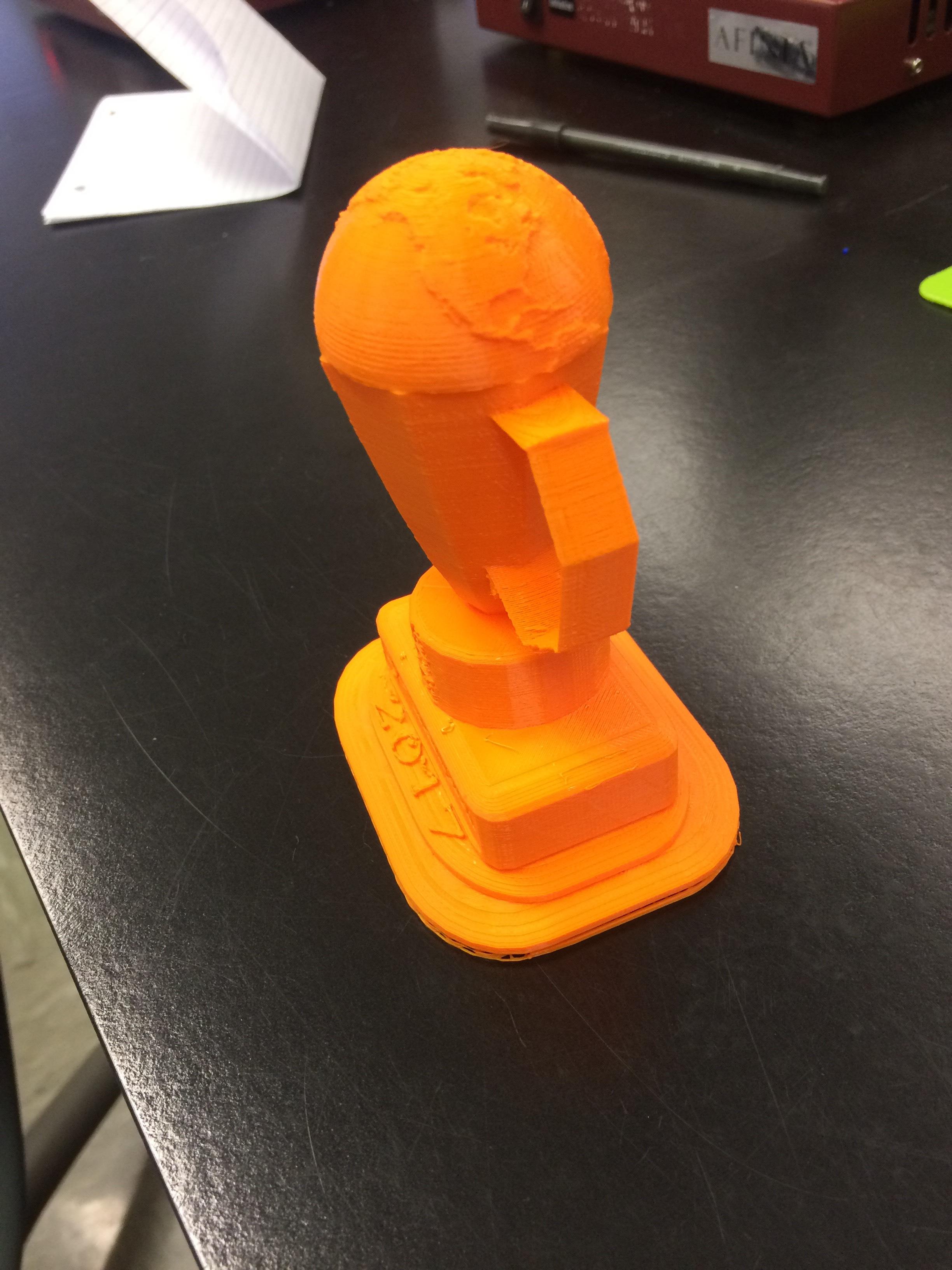 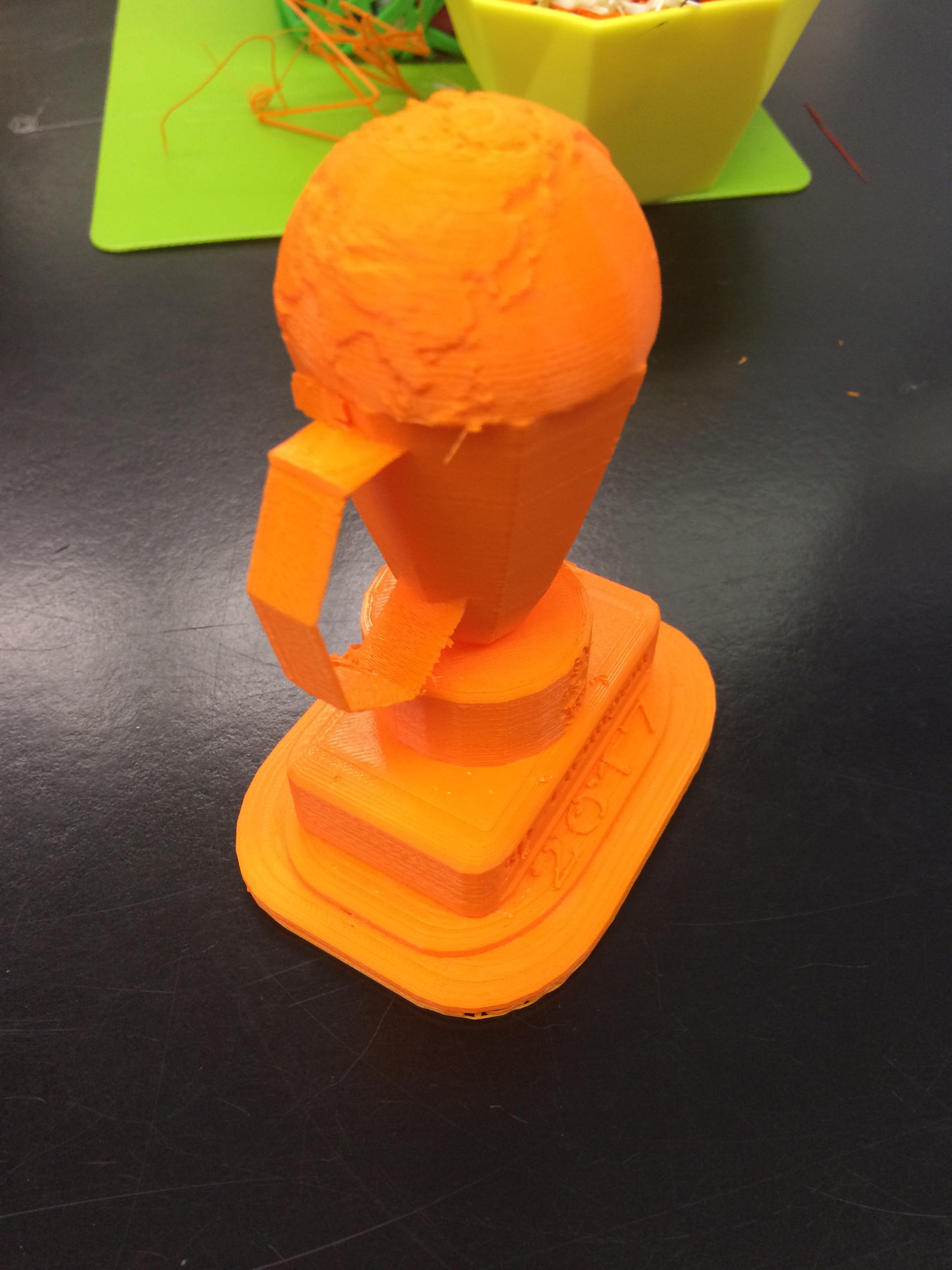 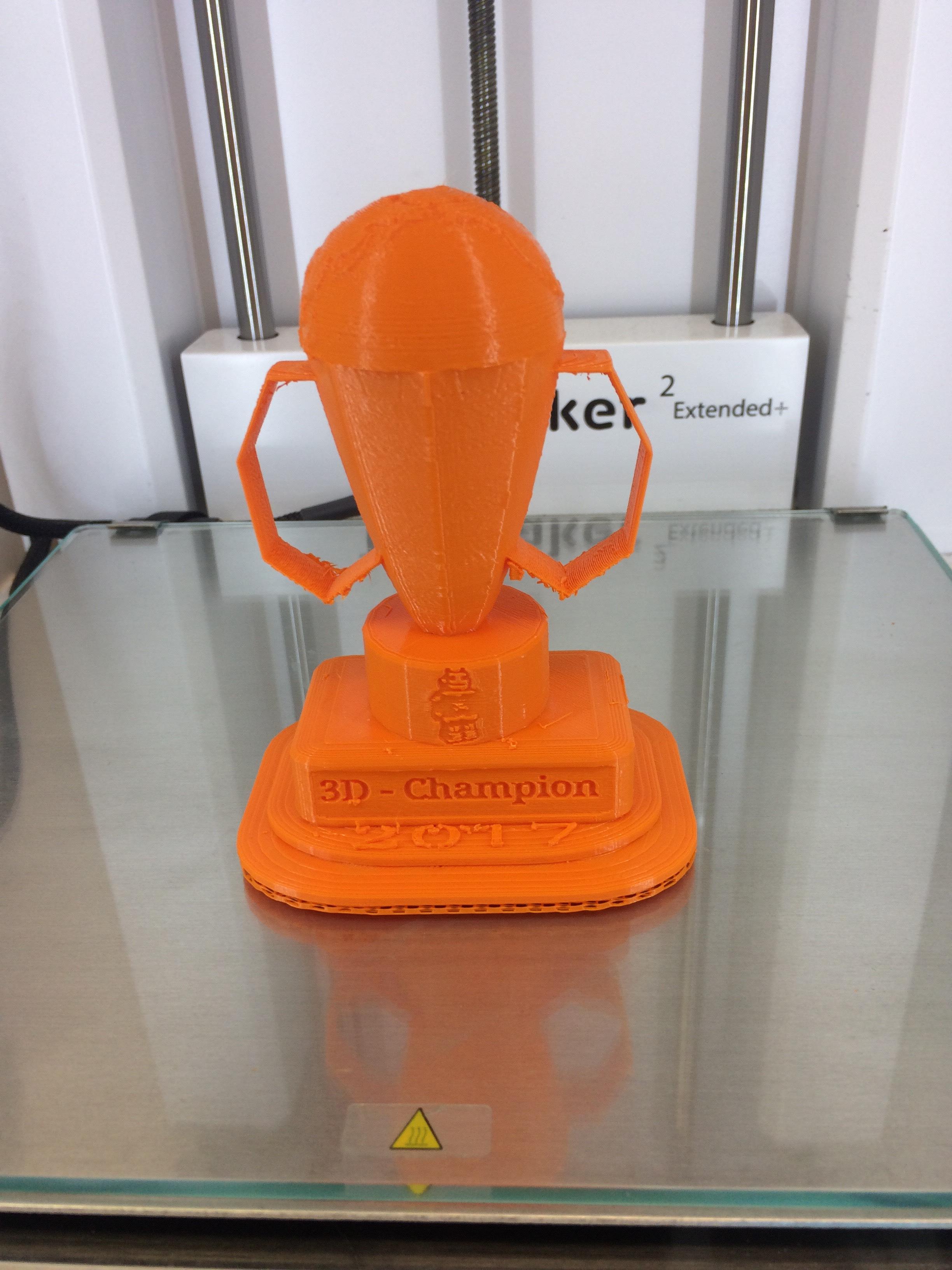 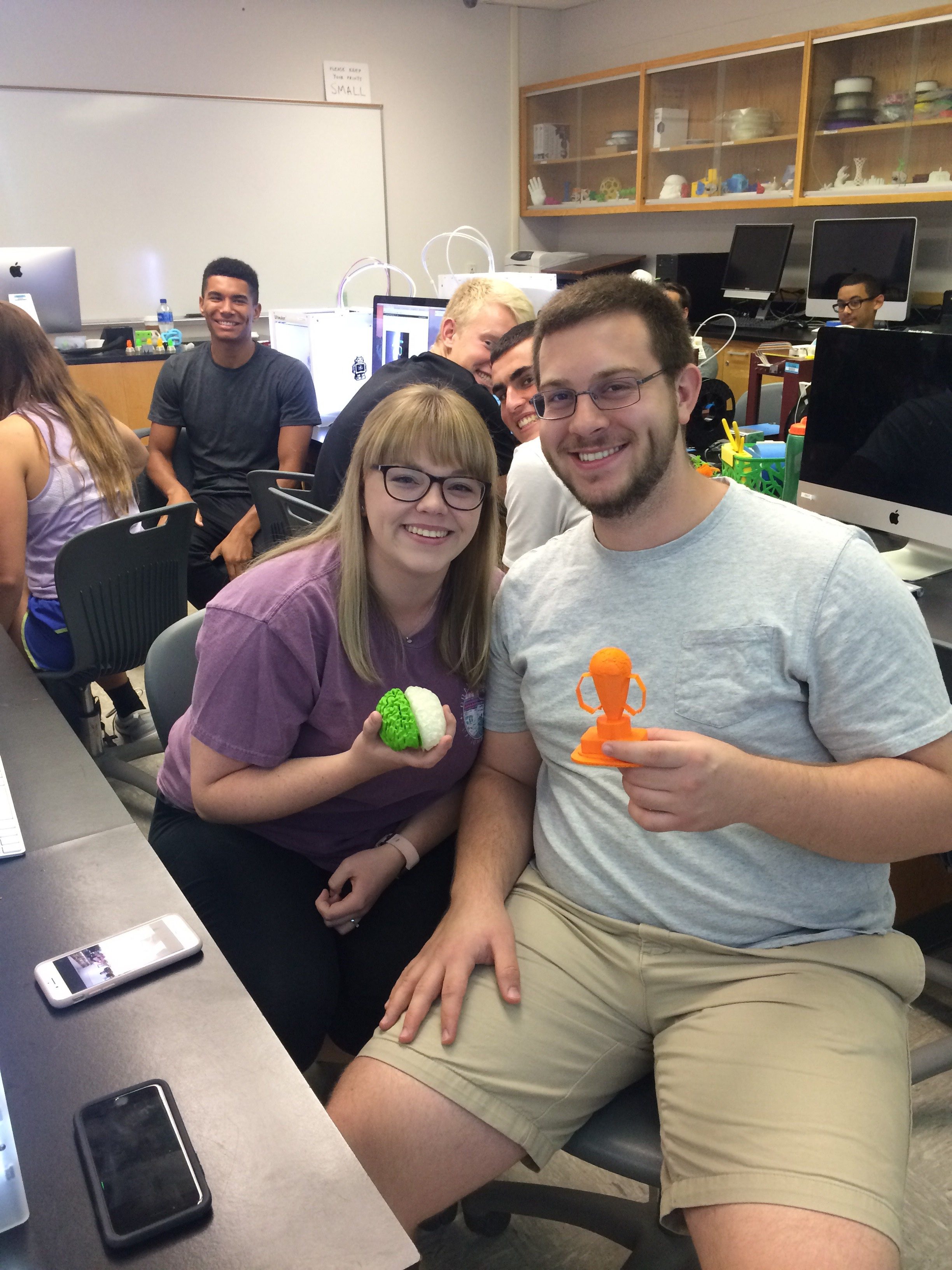 Keep up the good work you two!

Attached you can find the link to the Thingiverse and Tinkercad website!