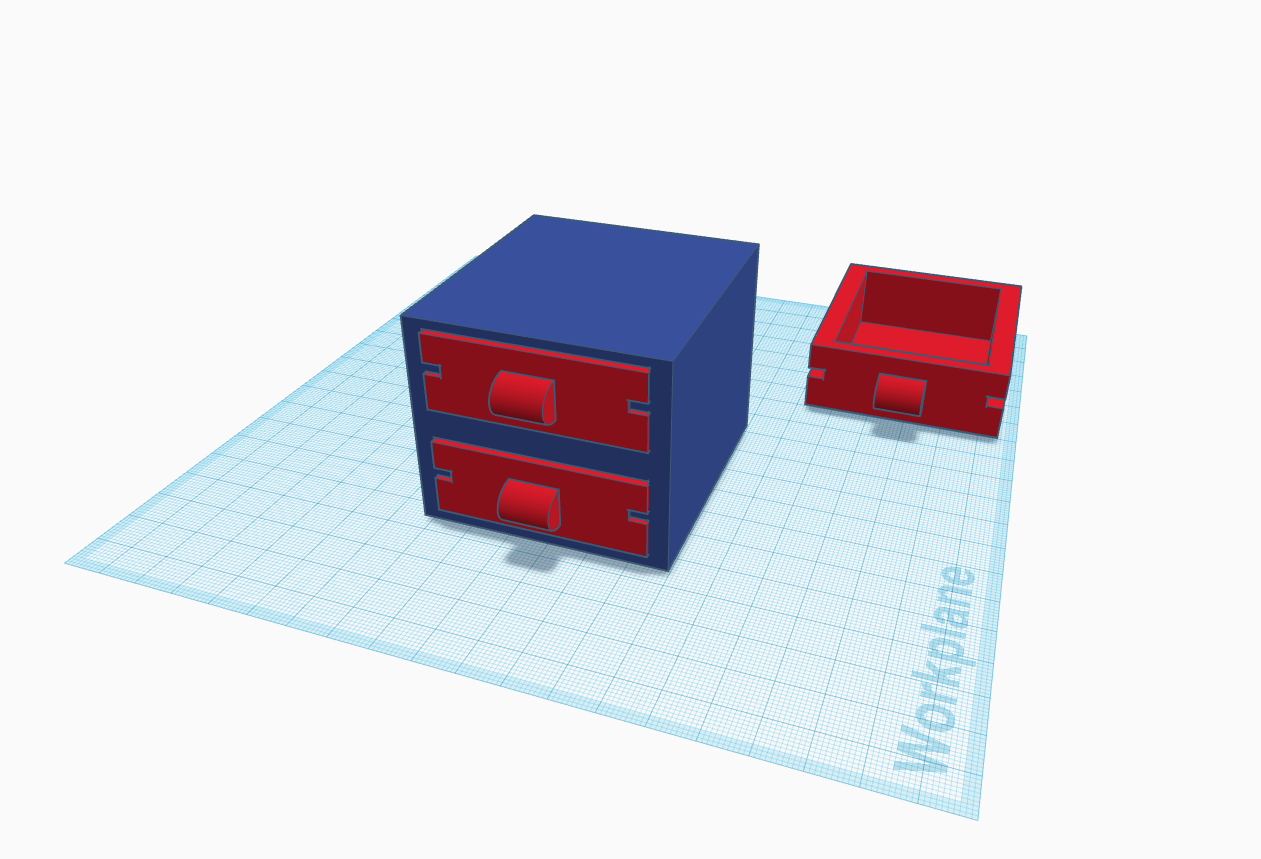 We decided upon making a small chest of drawers as our project design. We originally though of a drawers that were long enough to fit pencils in, but we agreed that something that could something the size of keys in it would work better on Tinkercad and in the 3D printers.

We began by trying different things out on Tinkercad and used the box shape as the ‘shell’ of our drawers. We hollowed of the center of the box to create the openings in which the individual drawers will come out from. The drawers themselves are comprised of the box shape again, but we edited the size to make them more of a cuboid shape so they would resemble drawers more and they can fit in the hole we created in the shell. We then created small strips either side of the drawers and hollowed them to about half way through, we used the area in which we hollowed out to act as sort of hinges inside the shell so the drawers can slide freely, in and out. For handles we used cylinder shapes and sized them appropriately so that they fit on the front of the drawers.

We are planning to print the object all in one piece, we are still in the early stages and need to look somethings through to make sure all the measurements are correct so that the shell and the drawers don’t mold together and we cant pull them out.

We had to change our original design. We decided to rotate our pieces so that they would be able to print without error, also we had to fix our handle design as originally we hadn’t noticed that it wasn’t actually connected to the drawer. Finally we had to build supports into our design to help the overhangs on the sides of the drawers and on the inside of the drawer and shell print without altering our design. Unfortunately, the supports we had created, although fit the drawer perfectly, weren’t needed as Cura has an option to be able to create custom supports rather than having to create your own in Tinkercad like we previously thought we had to. We began to print our first drawer and the shell of the drawer in class however we were unable, as of yet to see the end product as they took 2 hours each. 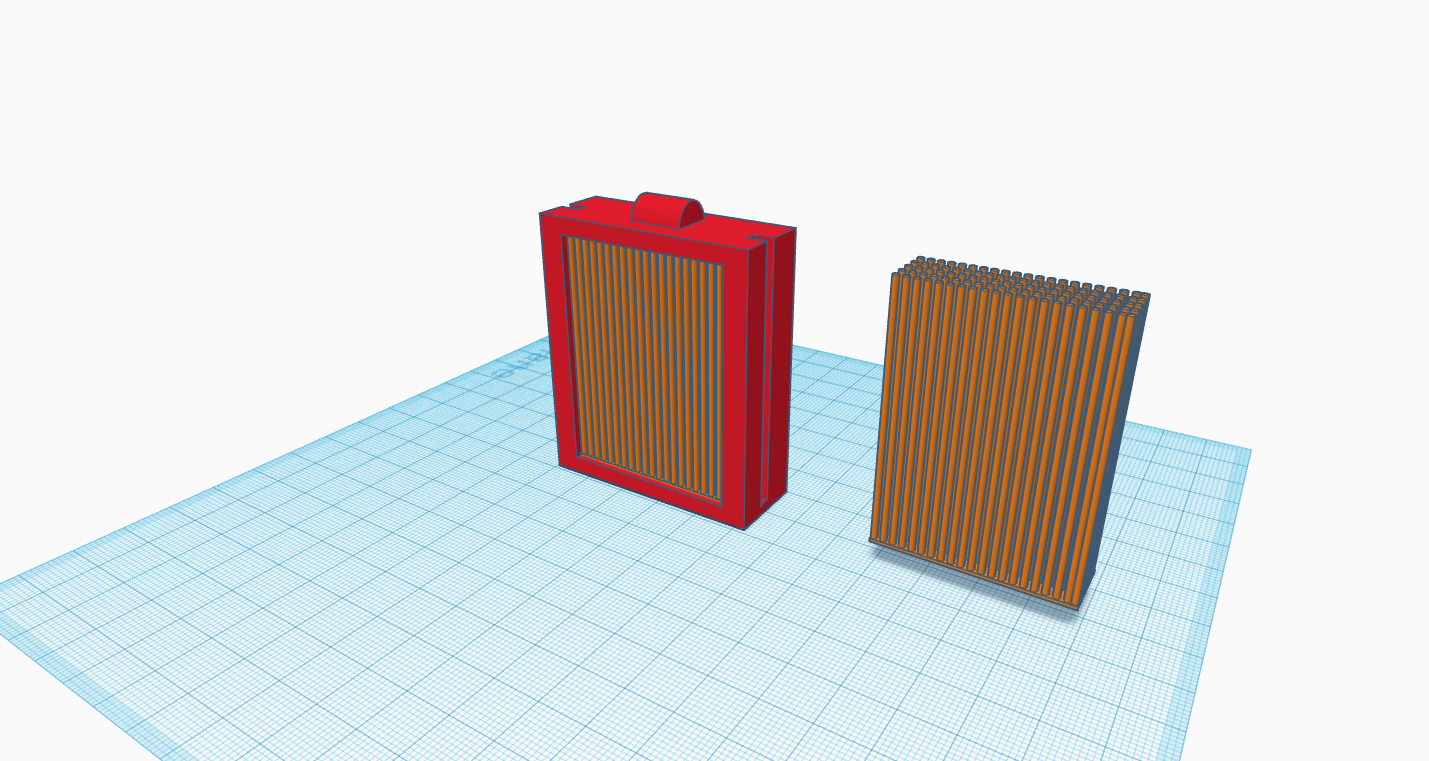 Our first print of the drawer without our supports that we manually created ended up being unsuccessful for two reasons. First, as you can see in the image below, the handle was disconnected from the base of the drawer, which caused it to print poorly to the point where it was just hanging off by  a thread. second, we ended up having to stop the print, because we printed the drawers laying flat so the overhang for the hole of the sliding section of the drawer was drooping, which would end up making our drawers unusable because they would not be able to slide in and out.

You can see the successfully printed drawers in the pictures later in the post. we had to stand the print up like shown in the image with our manual supports so that the overhangs could be printed smoothly. 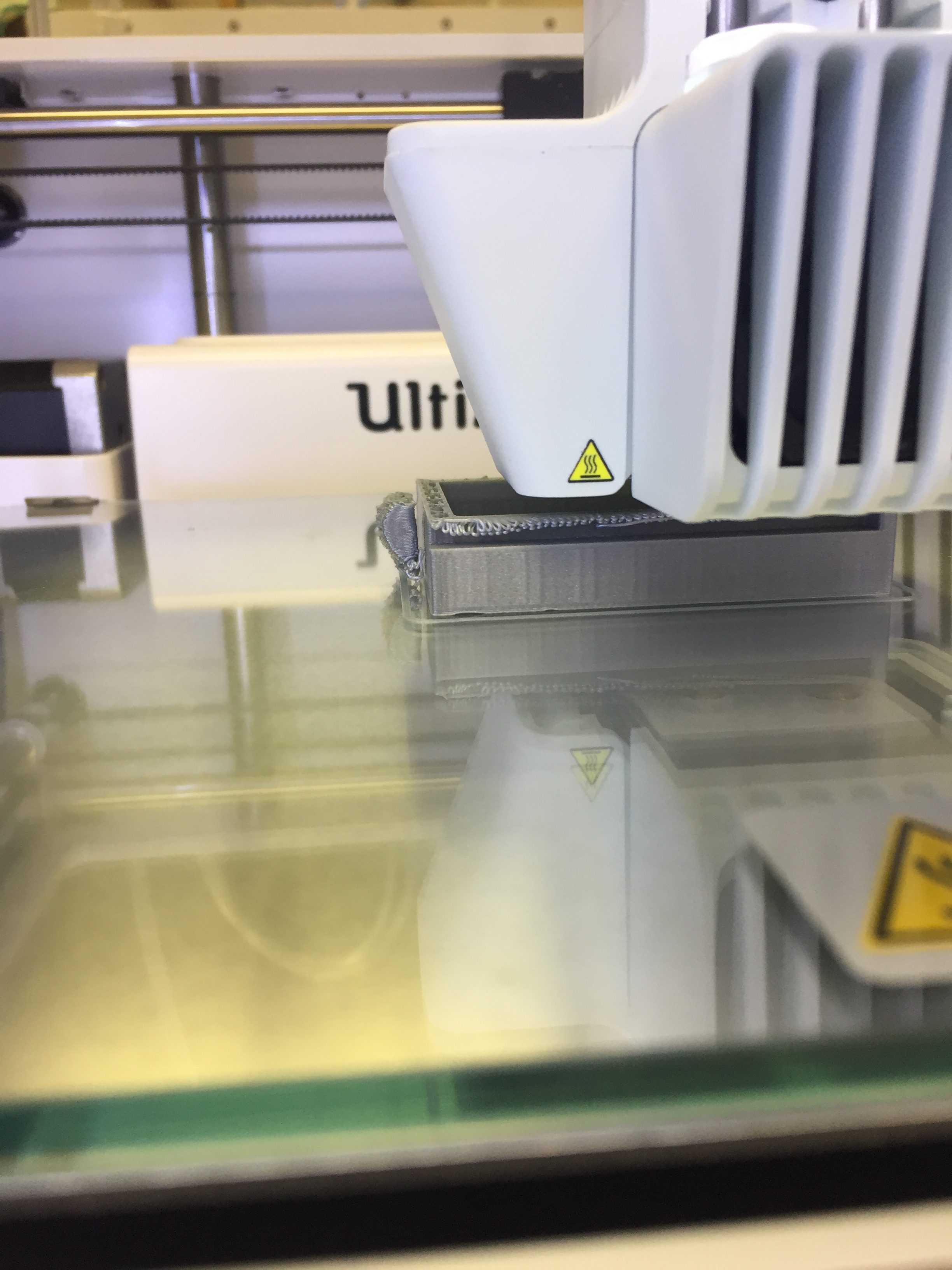 After two failed attempts at creating our final product, we printed a functioning set of drawers. Before we created the final product we attempted to make a shell without hinges and the drawers did not fit in the holes provided. (pictured far right, the grey shell). We edited the design and incorporated some hinges so that the drawers could slide out of the shell to a certain point, but without falling out of the shell completely. Our second design, the white one, was the first attempt at printing a shell with the four small hinges. One of these hinges printed incorrectly, however, and then broke off, so we aborted the print, which is why it looks unfinished. This happened because we attempted to print these hinges without supports.

The final product we printed with supports, it took 6 hours all in all (for the shell) . We are very happy with the final design. The drawers slide perfectly, and can fit multiple keys inside. 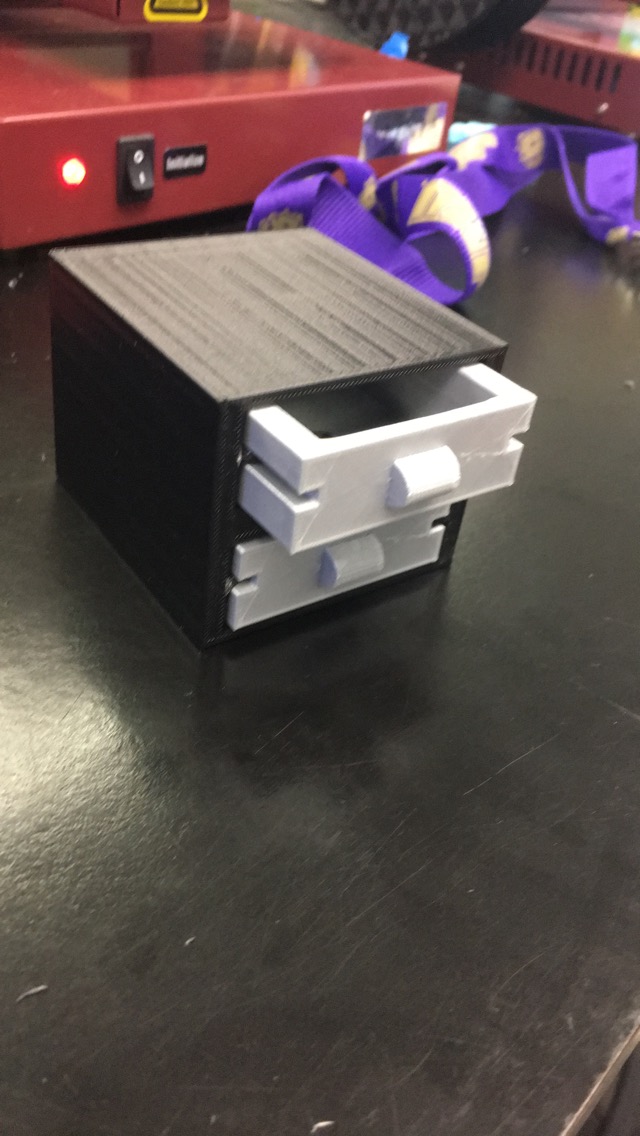 Overall, although designing this project took several design iterations, the end product ended up being very successful. It was also expected that it would take several designs to get this right, due to the nature of the project. The drawer and the shell had to both be perfectly sized and fitted to one another so that they could interlock and slide smoothly, and in the end, the scaling was perfect. We also had to figure out how to get the drawers into the shell past the hinges, because it wouldn’t fit past them. Initially, we thought we would be able to pause the print and put the shelves in then let the printer finish the print over the drawers, however we ultimately decided that this would not work because the protruding handle of the drawer would get in the way of the printing nozzle and could harm the machine. We ended up having to bend back one of the hinges on each hole so that we could slide the drawers in, and then once they were in slide it back. This was not ideal of course, but ended up working quite well. It was things like this that made finishing this project so difficult, which is why it is so much more satisfying now that we have a nice working final print. These drawers are something that we will actually use in our house at school, because we are always losing our house keys or forgetting to bring them with us when we leave, so we can keep this drawer on the table by our front door so we never forget our keys again.