The hardest part (so far) was definitely the brainstorming portion of the project, as the two of us have very different majors and think differently about design. However, we finally came to a design conclusion of a type of organizer box. The cool thing about our box is that is has a compartment inside that folds out when you pull it up, so it can be used as procrastination tool as well as a box to store things such as notes or candies. We sketched by hand the design for the whole project and are doing the 3d design one piece at a time. 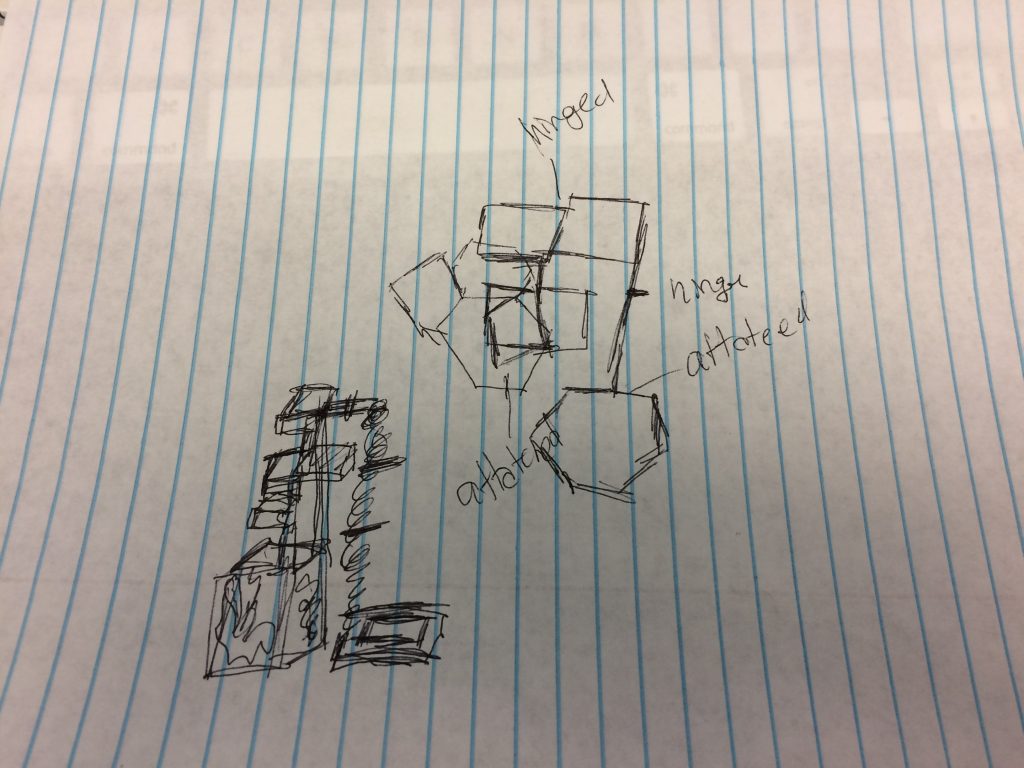 We started by designing the inside portions of the box, the part we can pull out. It’s edges are connected by hinges, so they fold like an accordion. We are building a set of support bars to act as a stand for the shelves when they are pulled out of the box. This is so that when the interior portion can stand on its own and serve as shelves for things like post-its, candies, and other office essentials. We created the shelf portion by designing pieces that created hinges on the edges. Our first print will help determine what changes we need to make to this part of the design. Luckily, the shell should be easy (should) to design because its a cube.

And next is what happened…. 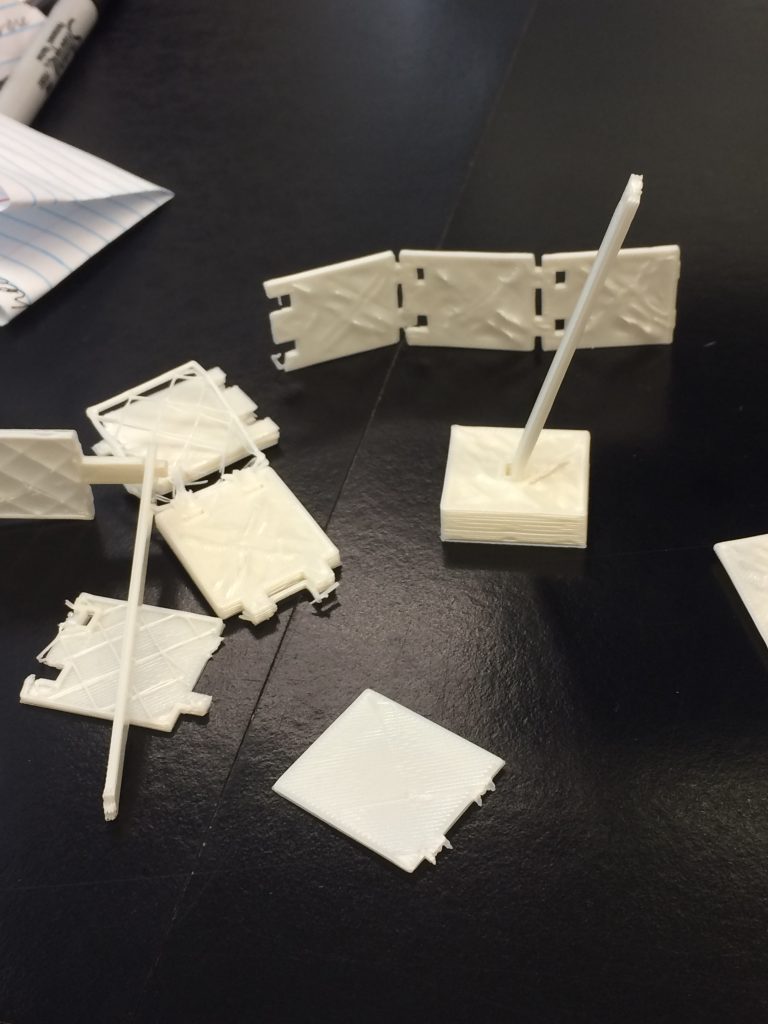 We also used our time while it was printing the first time to utilize Allison’s skills as an artist to get a rough model of what we are working towards. Shown below. 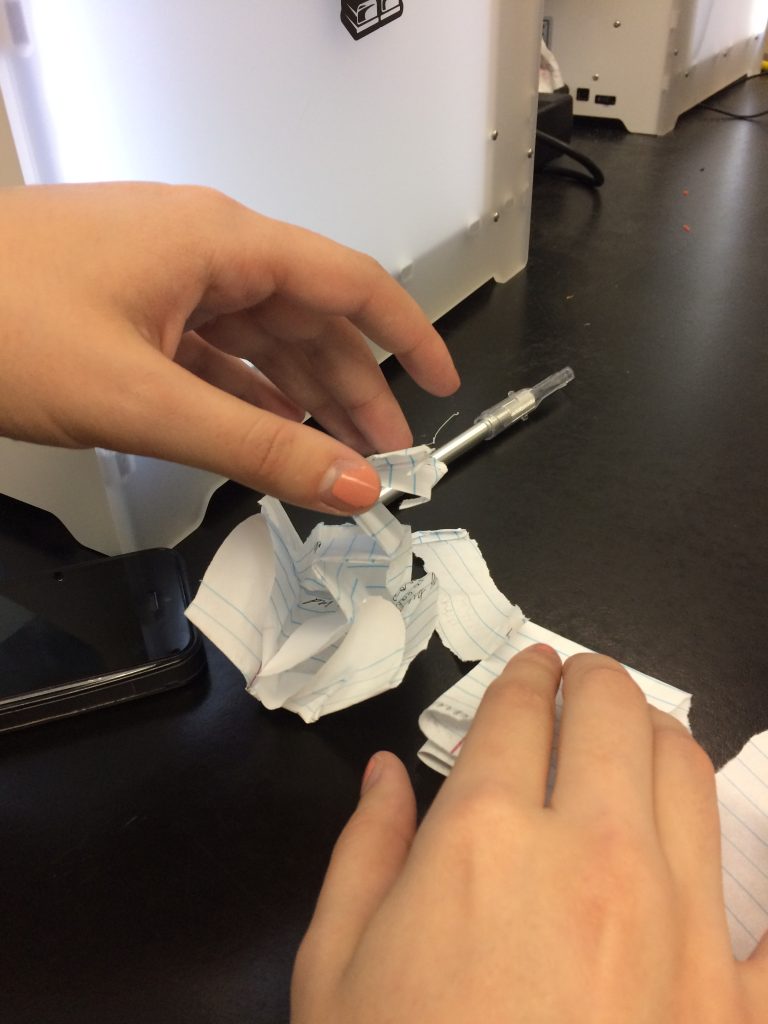 After our first draft printed, we determined that another approach would be necessary to better hinge together the pieces that are supposed to fold within the box. We found a hinge design on Thingiverse and used it to guide our own design for a good hinge. And here is our revised print design. We changed up the hinges and designed the box that will house the accordion shelves. 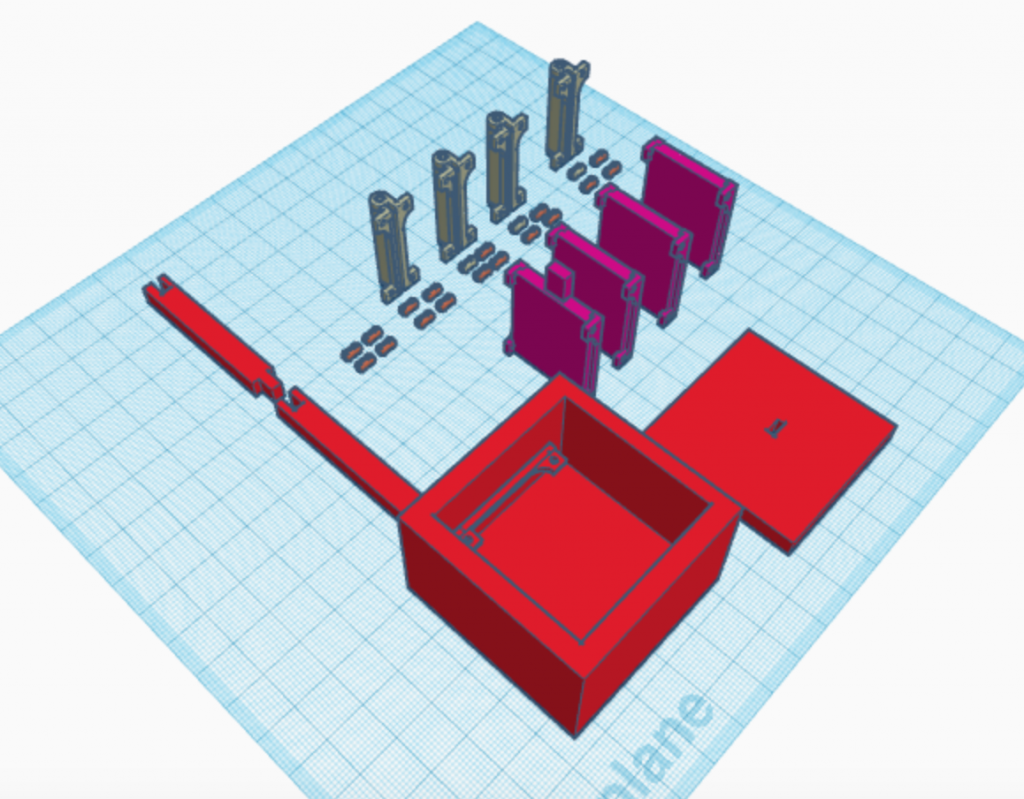 We had to reprint several times because delicate parts of the print kept breaking when we were assembling them. In the end, we just had to be extra careful. We were able to get the hinges fully functional, which was a big accomplishment for us. We used the pins to attach the hinges to the flat pieces/shelves, which I think was a great idea because we can rearrange how many shelves we use. If this were being used as fully functional in the future, we would have the option to replace certain parts if they broke rather than just having to trash it because of the pins.

Overall, in order to get a good product in the end, we learned that we had to make it so the printer wouldn’t get overwhelmed. So we made the prints bigger, lessening the details, and slowed the print speed down lower than it normally is. This took longer, but it was worth having a quality product rather than several fast prints that all broke. 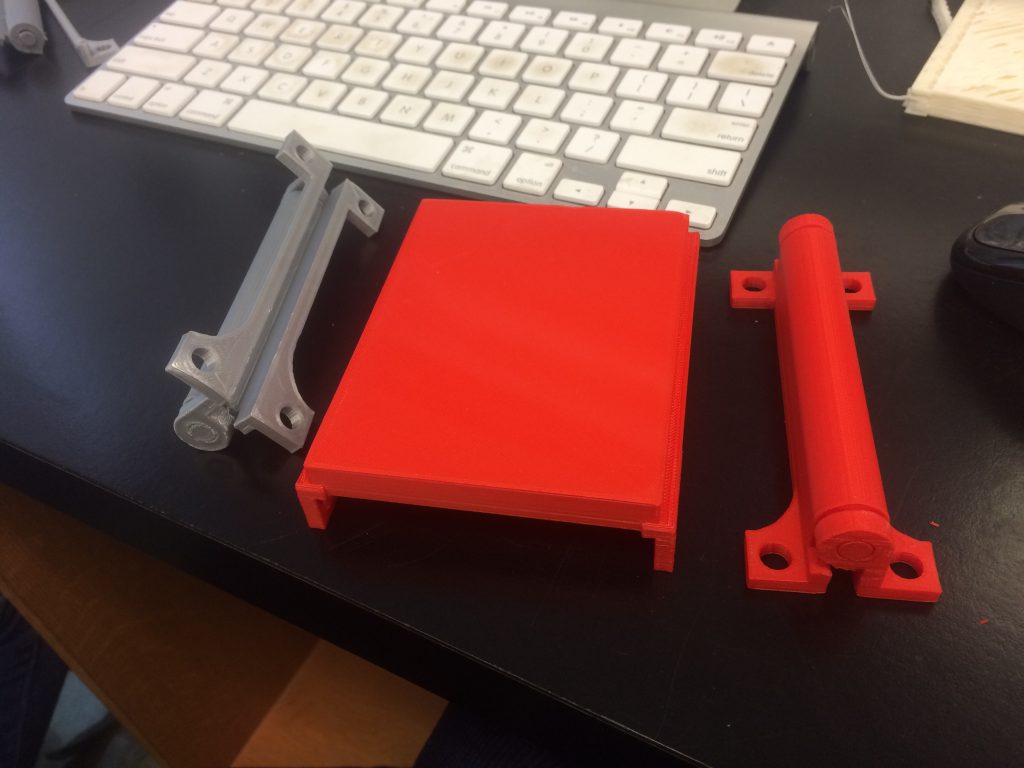 And FINALLY, we got something we could call a complete project! 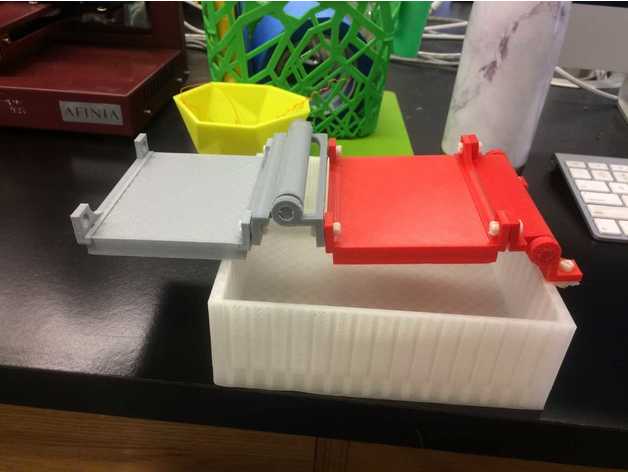 Here are some of the photos that show FAILURE, which just means progress! As you can see, it took many redesigns to get this project right! 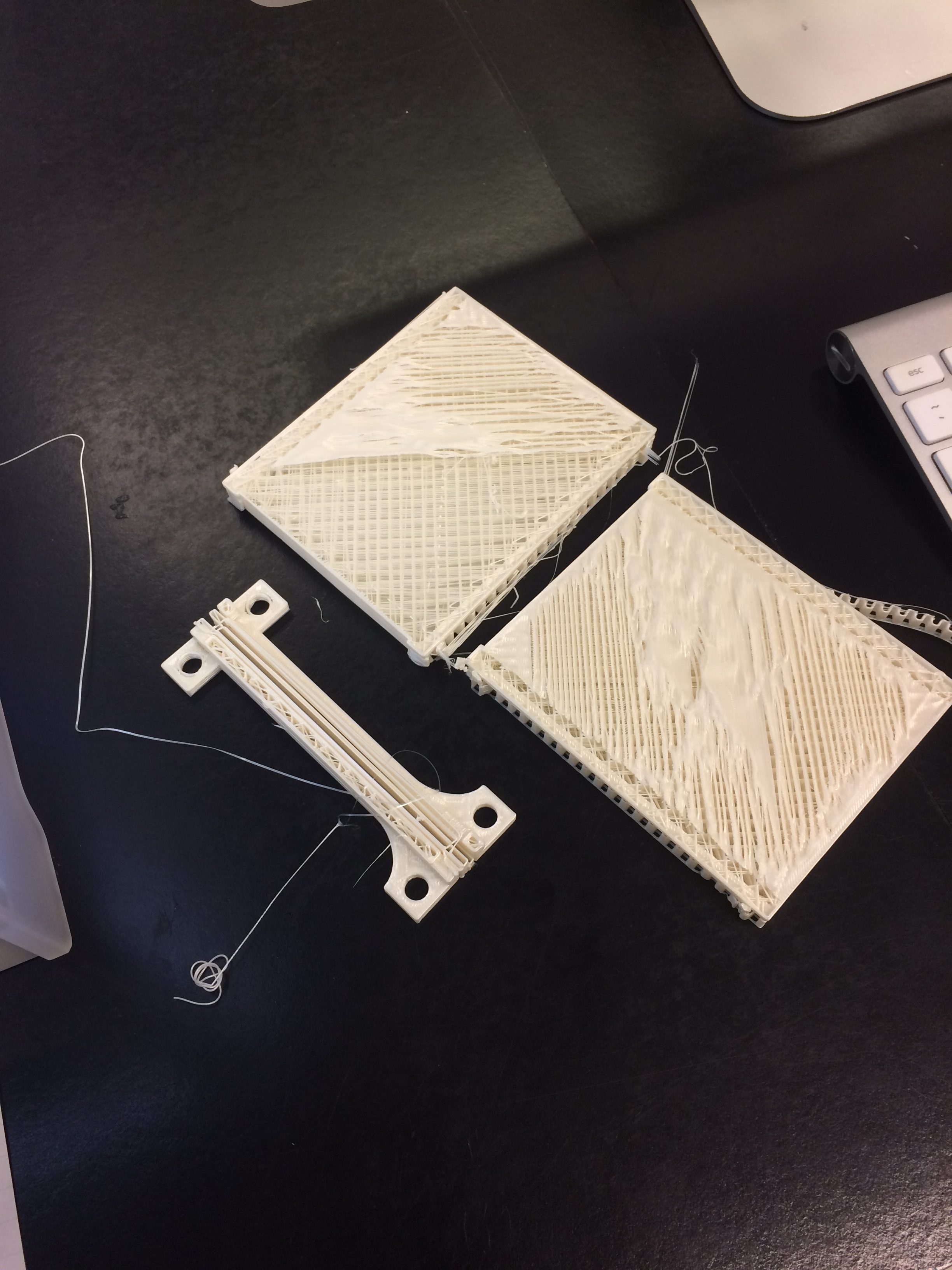 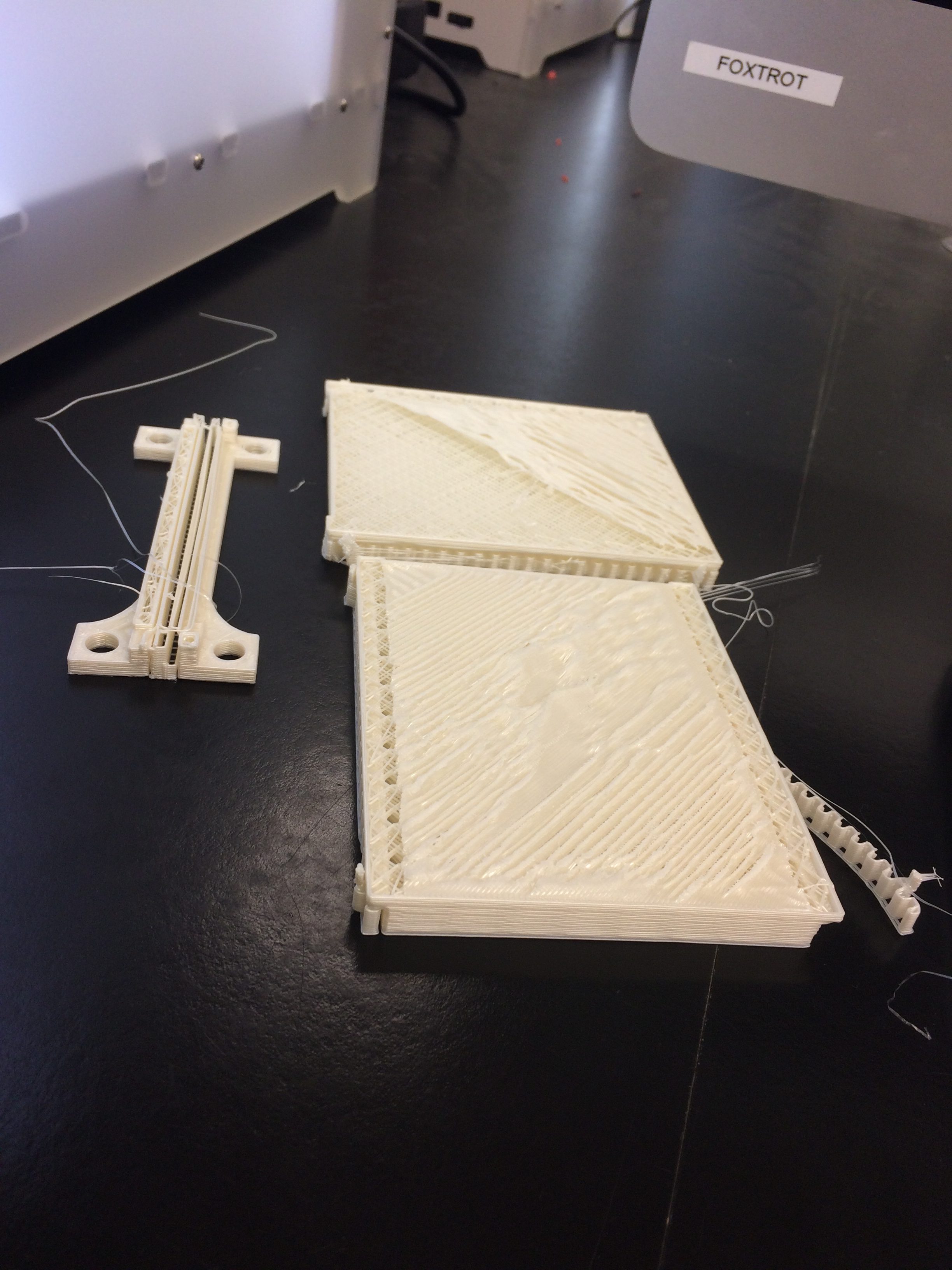 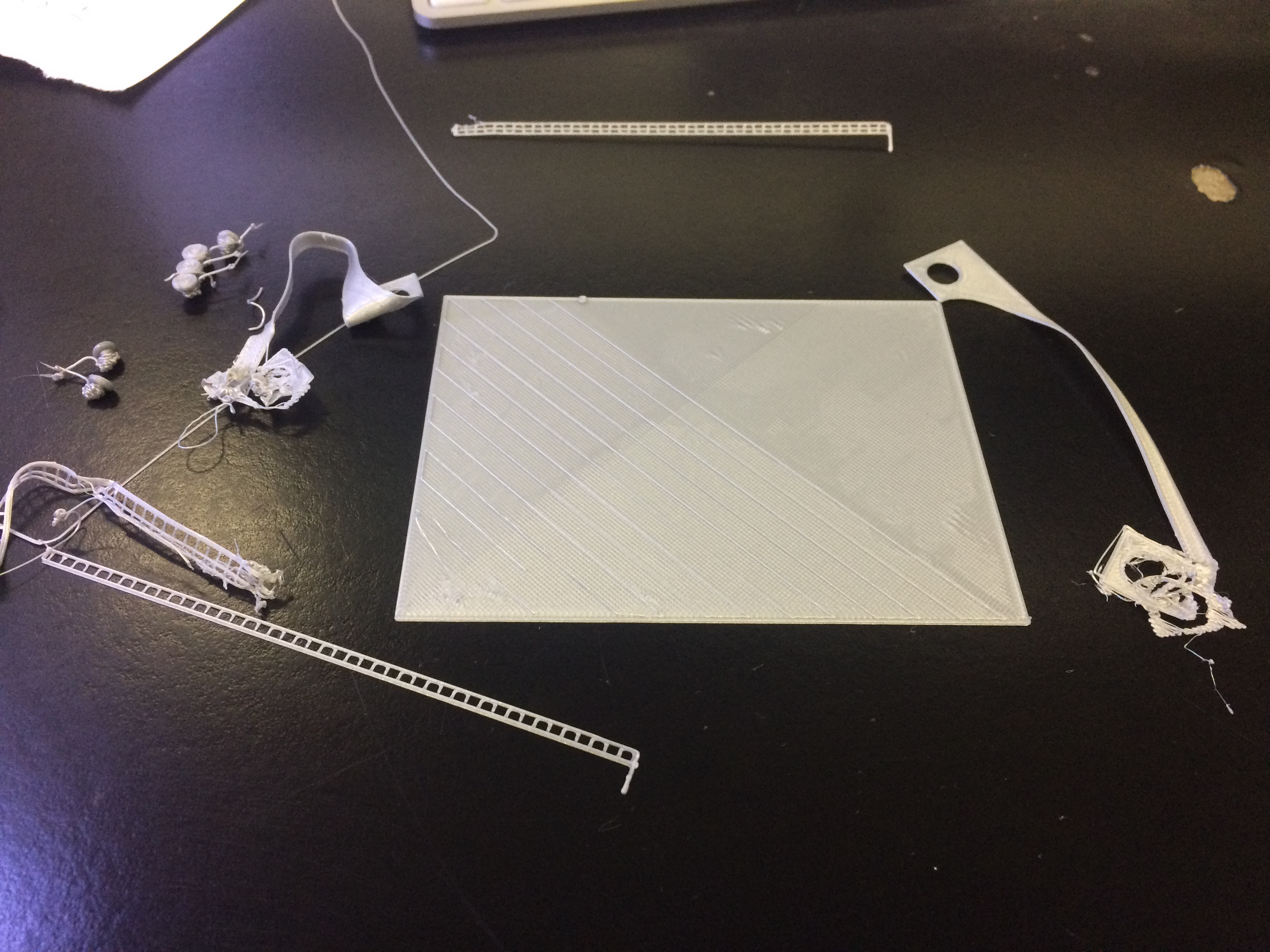 We also published the design for the box portion.

The accordion part of the box was borrowed from another poster. His/her design can be found here: