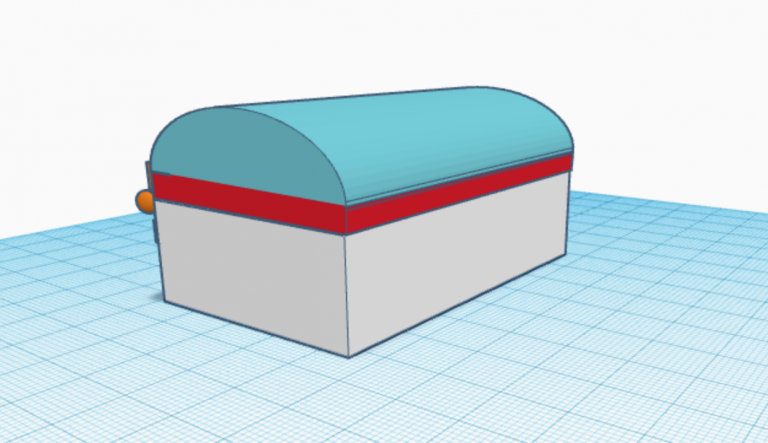 For our project we decided to create a miniature treasure chest that you can carry around. After looking at numerous designs on Tinkercad and Thingiverse we came up with the idea and decided to give it a try. Typically, when you think of a treasure chest the first thing that pops into your head is a huge object that you keep different things in. We feel like this will be a cool way to keep track of things people use in their daily lives such as keys, coins, or just relatively small items. Most of the shapes used in this design came from the basic shapes located in Tinkercad. For example, we altered a box and round roof to create the lid of the treasure chest. For the bulk of the chest we used the box and lid found in the featured shape generators. We think this design meets the project’s requirements because it is a different take on a interesting product. It is not everyday you come across a treasure chest, let alone a miniature one. One of the biggest challenges with this design was fitting the hinges on the treasure chest and making sure they operate correctly. As of right now we are expecting our design to print in one piece, which we feel like that is going to be pretty difficult. We originally struggled with aligning every piece of the chest, so hopefully printing a few test versions will help us perfect the overall product.

Our first draft print showed us two flaws within our design. 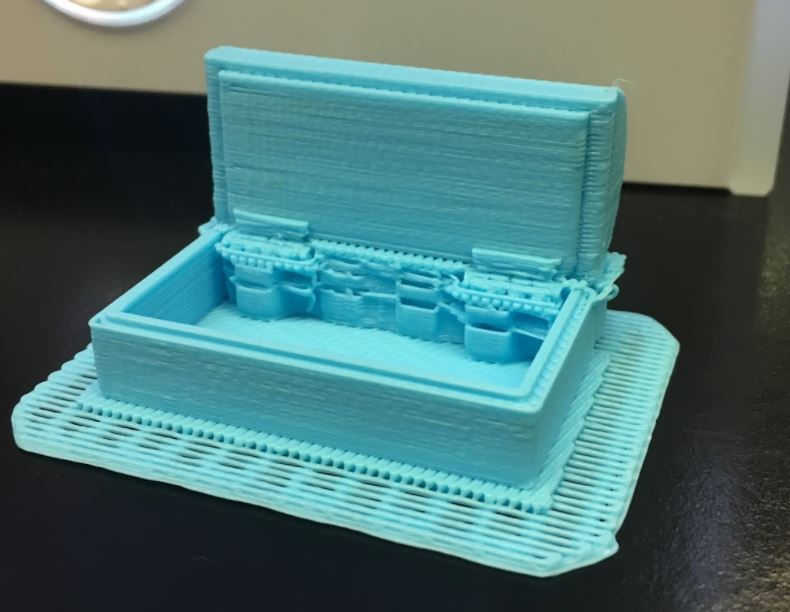 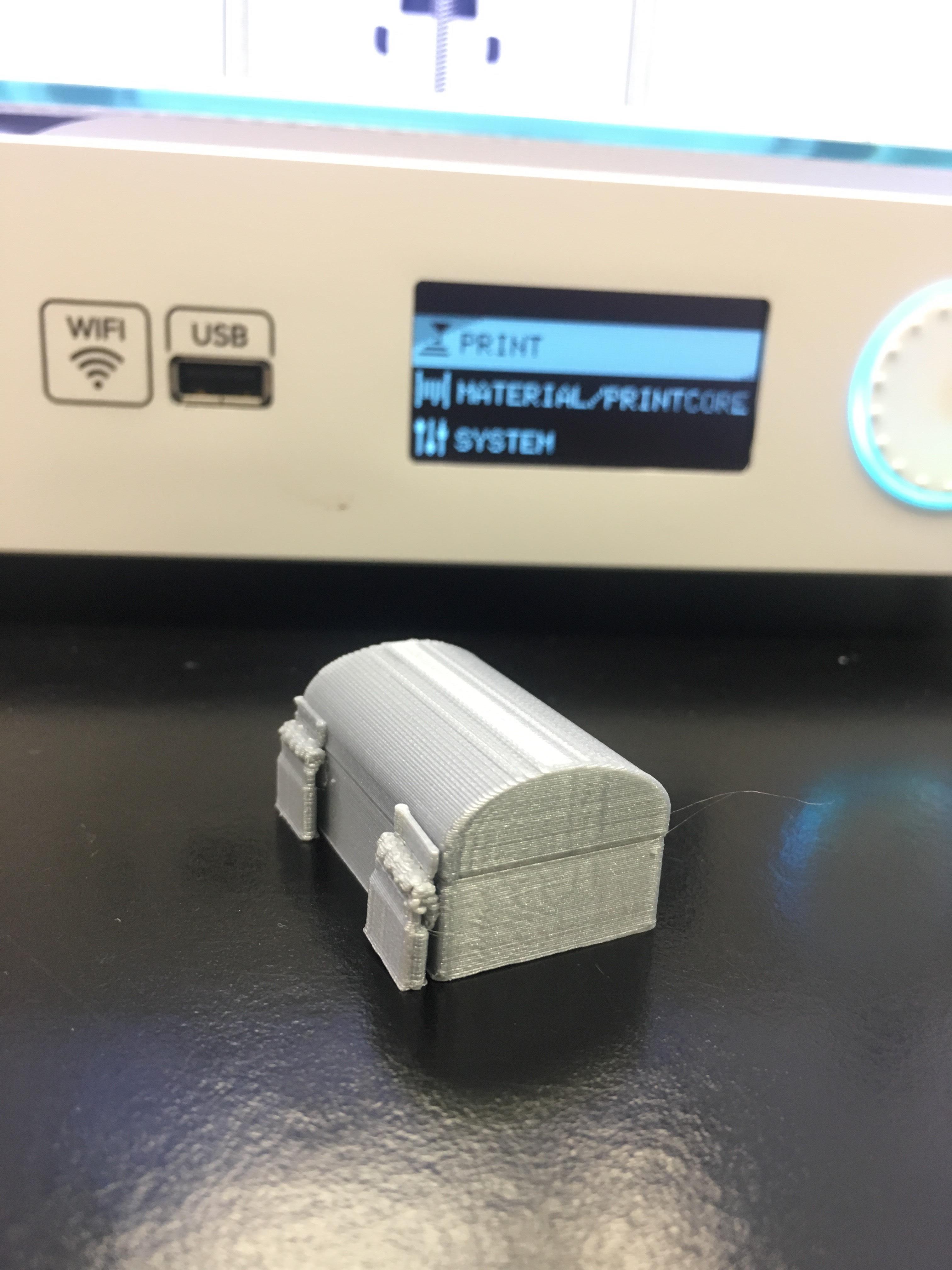 We learned that our design was too tightly closed for the 3D printer to leave space between the lid and the open box. Once we printed the first iteration of our design on the Ultimaker, we tried to open our box and discovered that it was sealed shut. We knew that part of this was due to attempting to print a shut box, but also suspected that our hinges could use some work. We then tried to print an alternate version of our design with the lid open, and the Afinia added support in beneath the open lid which we did not expect, it also made very sloppy hinges which proved to be unusable. We learned three things from these prints, first, that printing a box which was already closed would not be able to open upon printing. Second, we learned that the Afinia was a less reliable machine when printing fine details, and that objects printed without support would have support added to them by the 3D printer. We also discovered that finely detailed parts of our prints would not turn out perfectly as we expected, such as the small amount of space which was intended to allow our hinges to move.

Based on our trials from last week, we concluded that a completely open box would be much easier to print, and that redesigning our hinges would guarantee that the box shuts as expected. We looked through Tinkercad and Thingiverse for inspiration, and after disassembling a few hinge designs, we created our own version. We broke apart our treasure chest, completely removing the lid and hinges, and then adding the new hinges onto the completely open chest. It took a lot of fine tuning and trimming to ensure that the print would turn come out as expected. 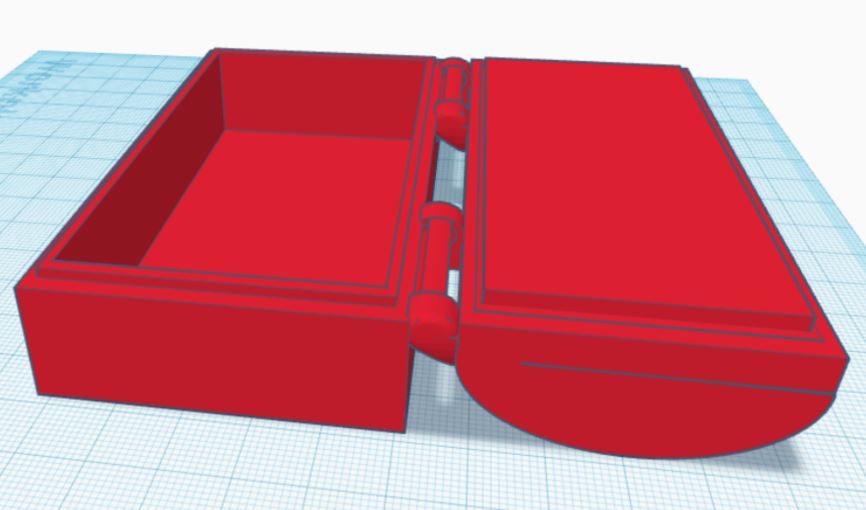 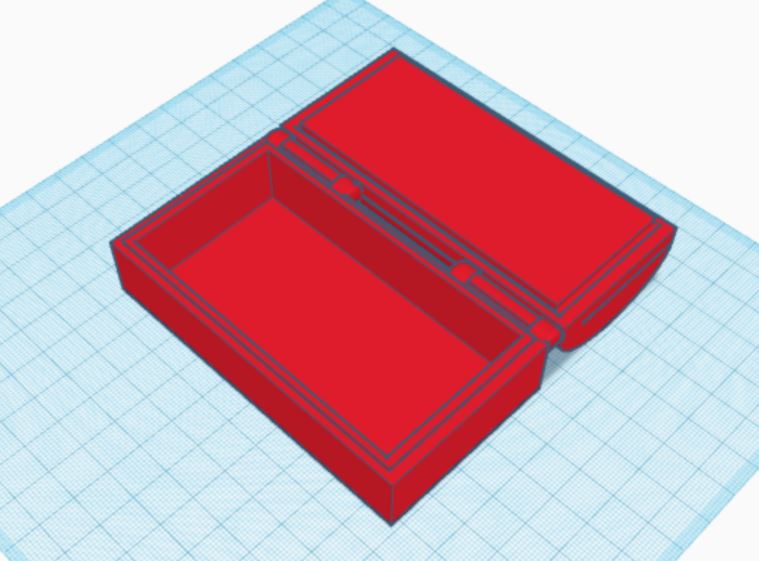 In the above photos you can see how we opened the box, and made the lid and the box the same height. We completely opened the box so that the 3D printers would not add any unwanted support to our design. Later in the week we went into to the lab and tested our new design on a very small scale. 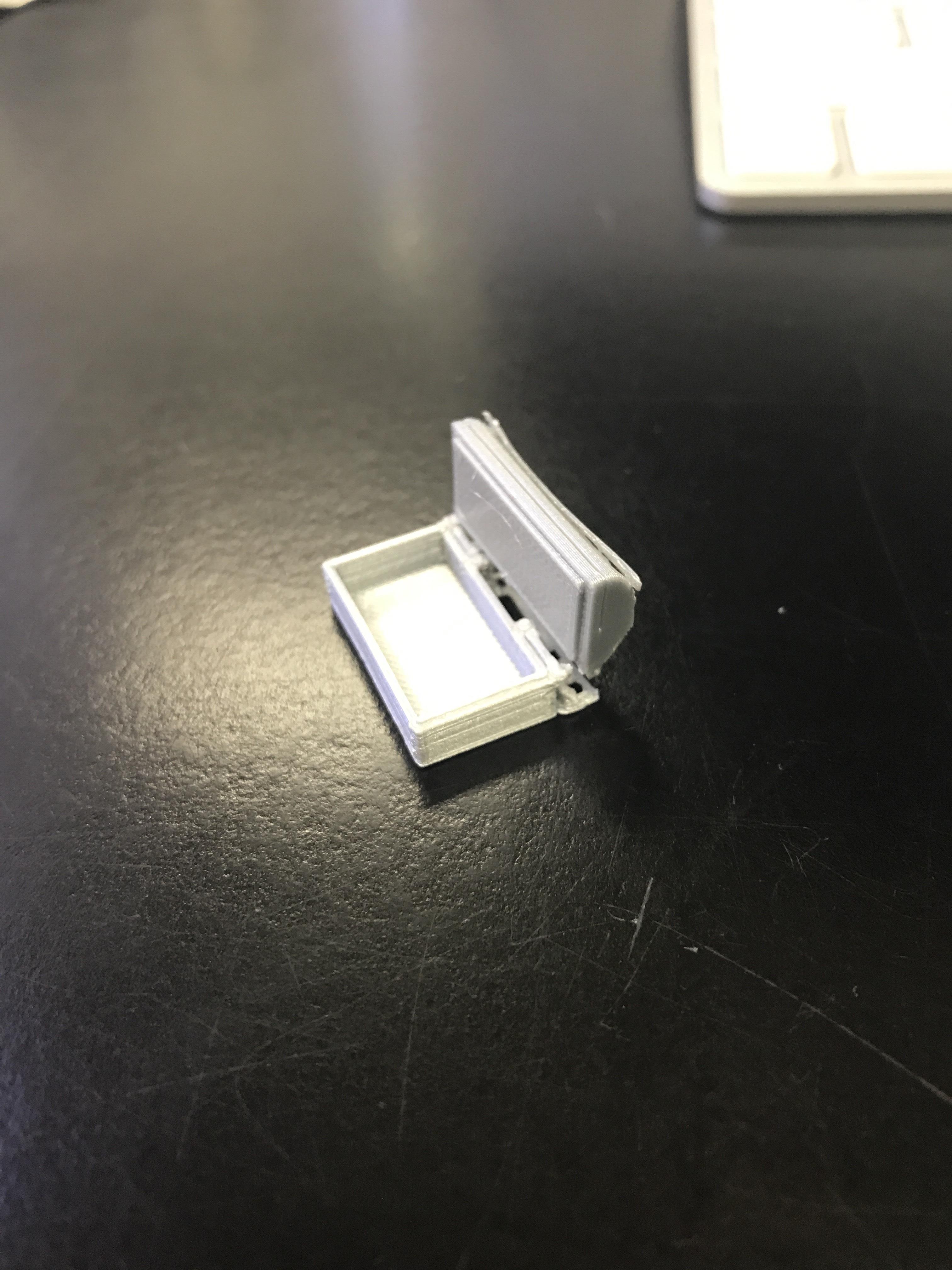 While the design was very small and frail, the box opened and closed as expected. After playing with our print for a little bit, the hinges began to break off. We suspect that the hinges may not be attached tightly enough to the lid and the box, or that because of the size of our design, they broke very easily. Next class we plan on reprinting our design on a larger scale, and playing around with our hinges to see if we can perfect that detail. 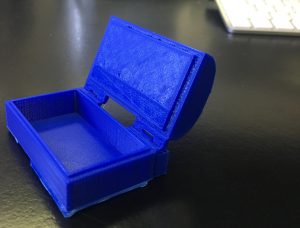 Our final print took a few more tries than expected. We believed that our hinges were going to work, and saw that they again failed. After trying to print the treasure chest multiple times on different ultimakers, we concluded that because of the small scale, the printer could not accurately print our hinges.

We tried a few more times to print the chest on a larger scale, the ultimaker did not react well. These prints did not turn out complete, and were very stringy. We believe that some edit which we made to the design may have caused this, but didn’t change anything since we printed the blue chest. Examples of this are pictures below. 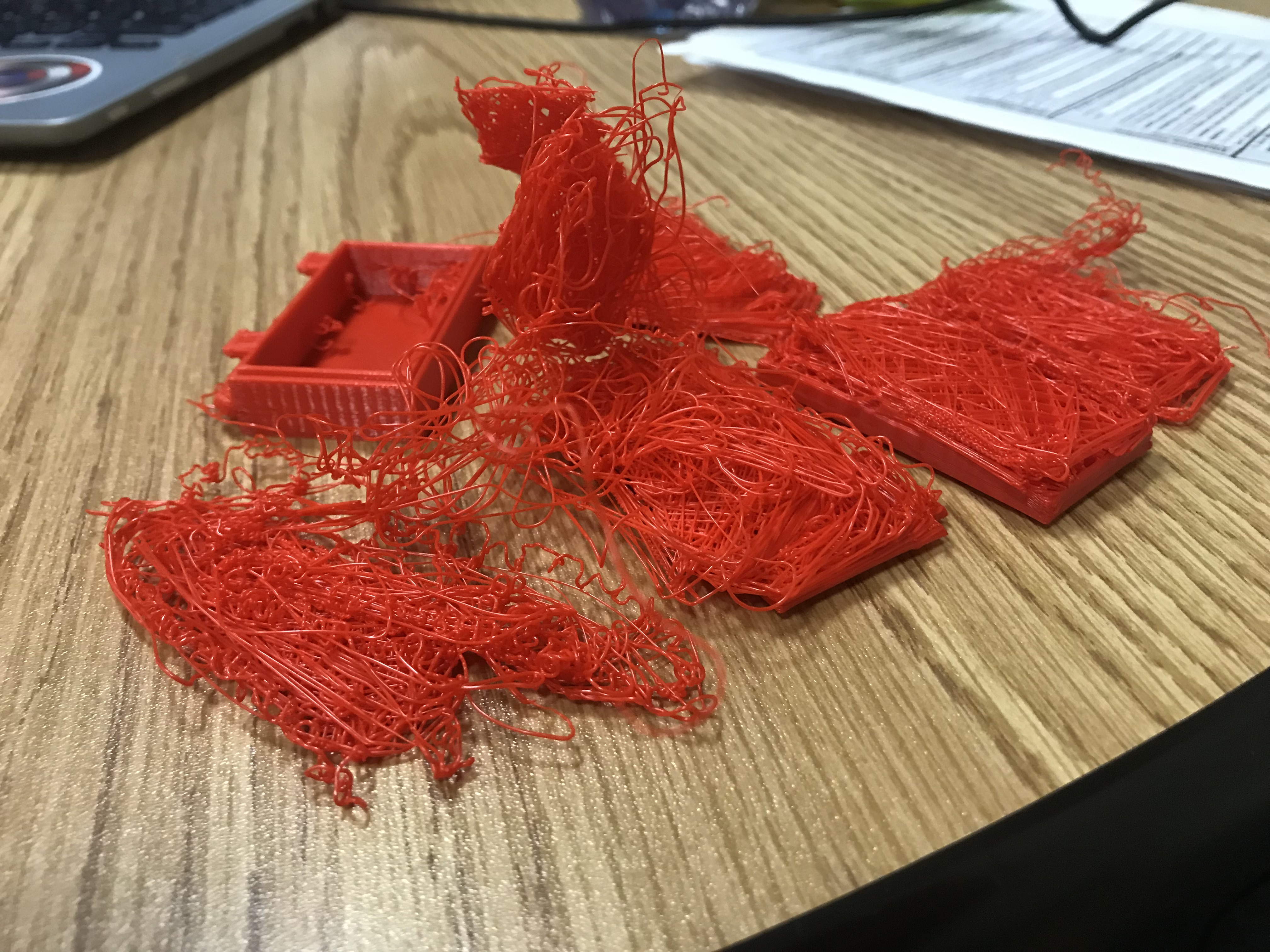