This assignment I found particularly challenging. I felt as if I was behind the 8-ball from the start. The first step we took as a class was to learn how to make a common ring design, and bring it to actuality. Upon the completion of this step, I guess I lost where I saved it or simply didn’t save it properly. During the following class, after I learned this, I had to restart the process. The class went on to learn how to use Meshmixer, while I was still in Fusion re-tracing my steps. The next class, I finally had my ring design created and ready to bring into Meshmixer, however, it was difficult to follow along with what we were learning and focus on re-creating my ring. It seemed like I was always a class behind and just trying to catch up. Once I was able to tweak my ring in Meshmixer there was only 10 minutes left in class and everyone had a print of their ring. I tried to hurry and print mine but my luck struck out as the printer was acting up and I wasn’t able to do my print. As, the final ring deadline approached I still felt behind in knowledge and time. Although, I was not able to do a print, i was able to see how others turned out and adapt mine to a way I believe it would print properly. In the end I spent some time developing a ring I am happy with.

For my design, I thought of a few different ideas. But the leading reason as to why I designed mine the way I did was because I wanted to make something I would where or give to my mother as a gift. I designed a couple rings but was happiest with a simple JMU ring. For this, I stamped in Meshmixer the letters into the ring. With the intent to potentially give this to my mom, I wanted to write a message on the inside. Unfortunately I was unable to do this do to just being behind. Even though I felt rushed, i’m really happy with the ring. I think the simplicity of it is very appealing and something my mom would really like. The only technical issue I ran into was a slight indent next to the J in JMU. I increased the triangles as high as they could go and it still showed up. We discussed how in the actual print it will most likely be so small and hard to even notice. Besides, It adds a little character to it. 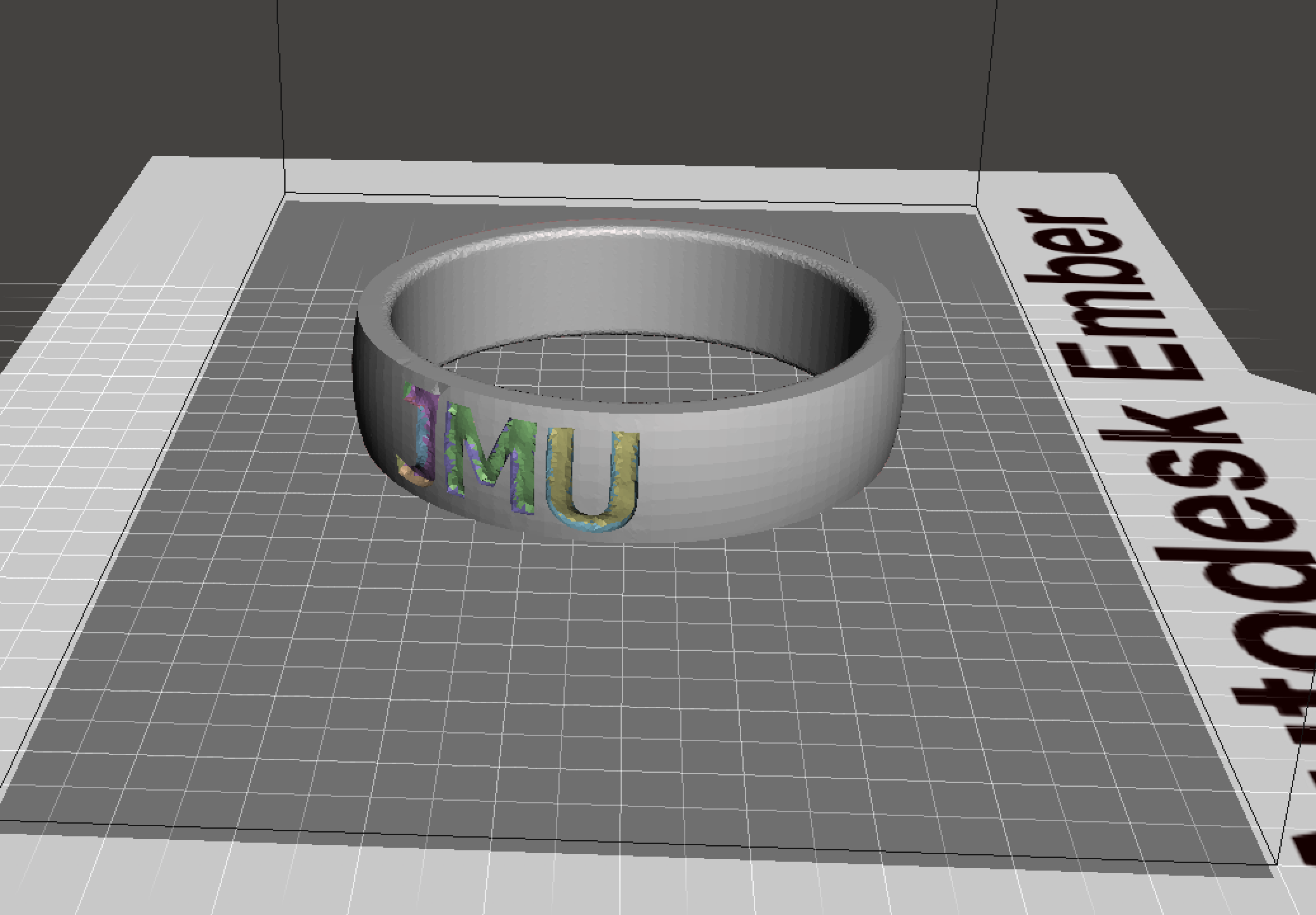 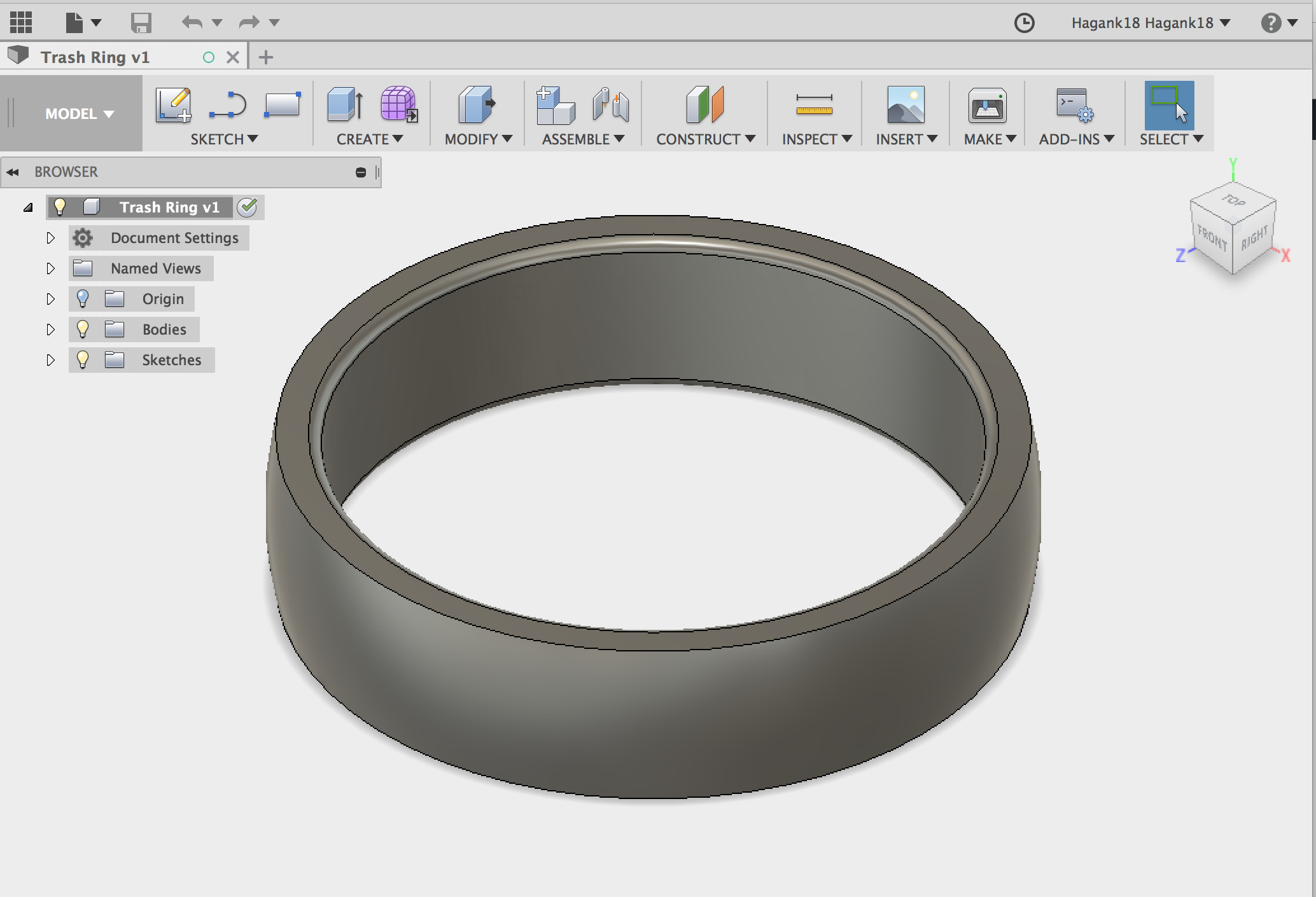 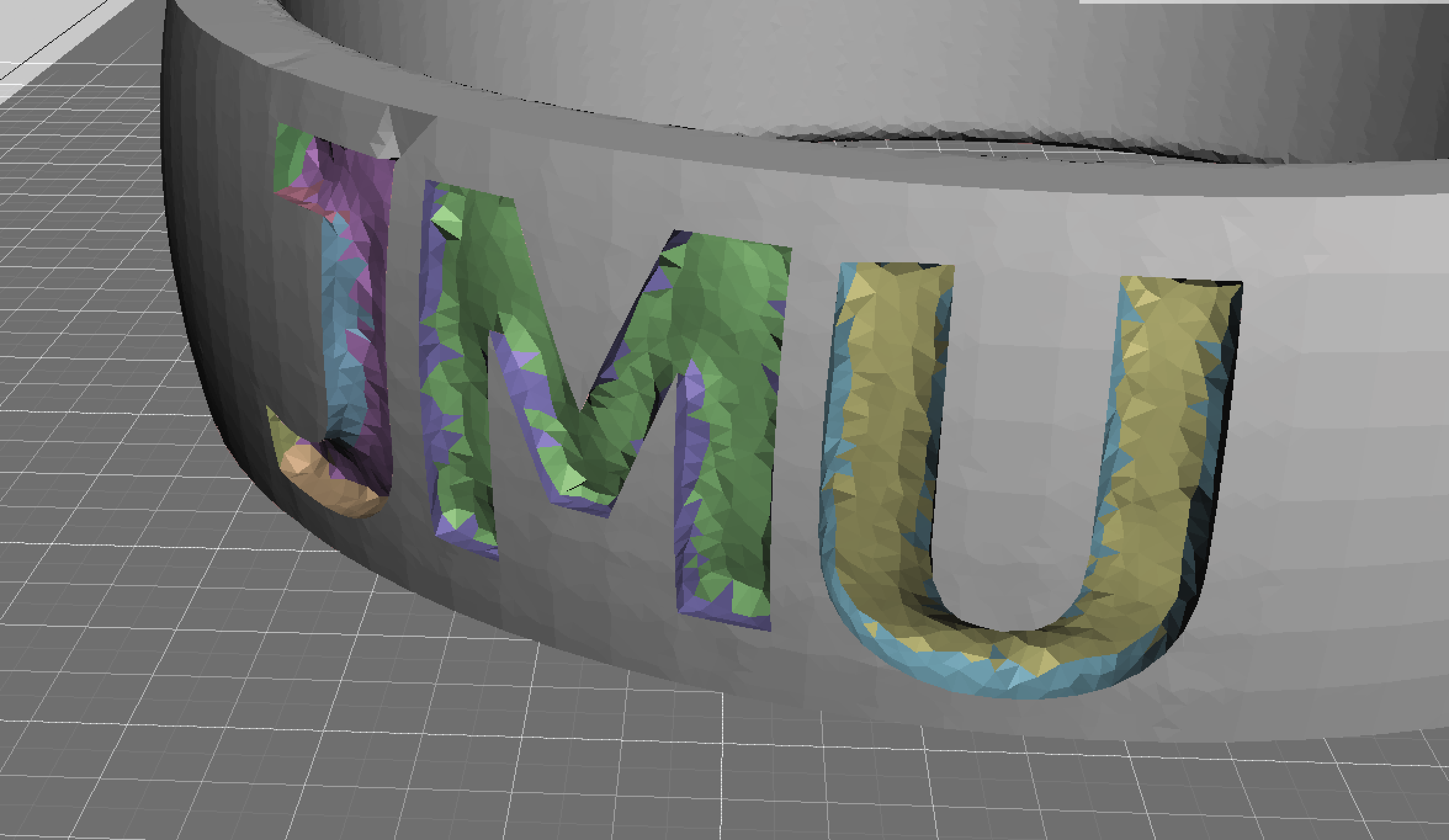 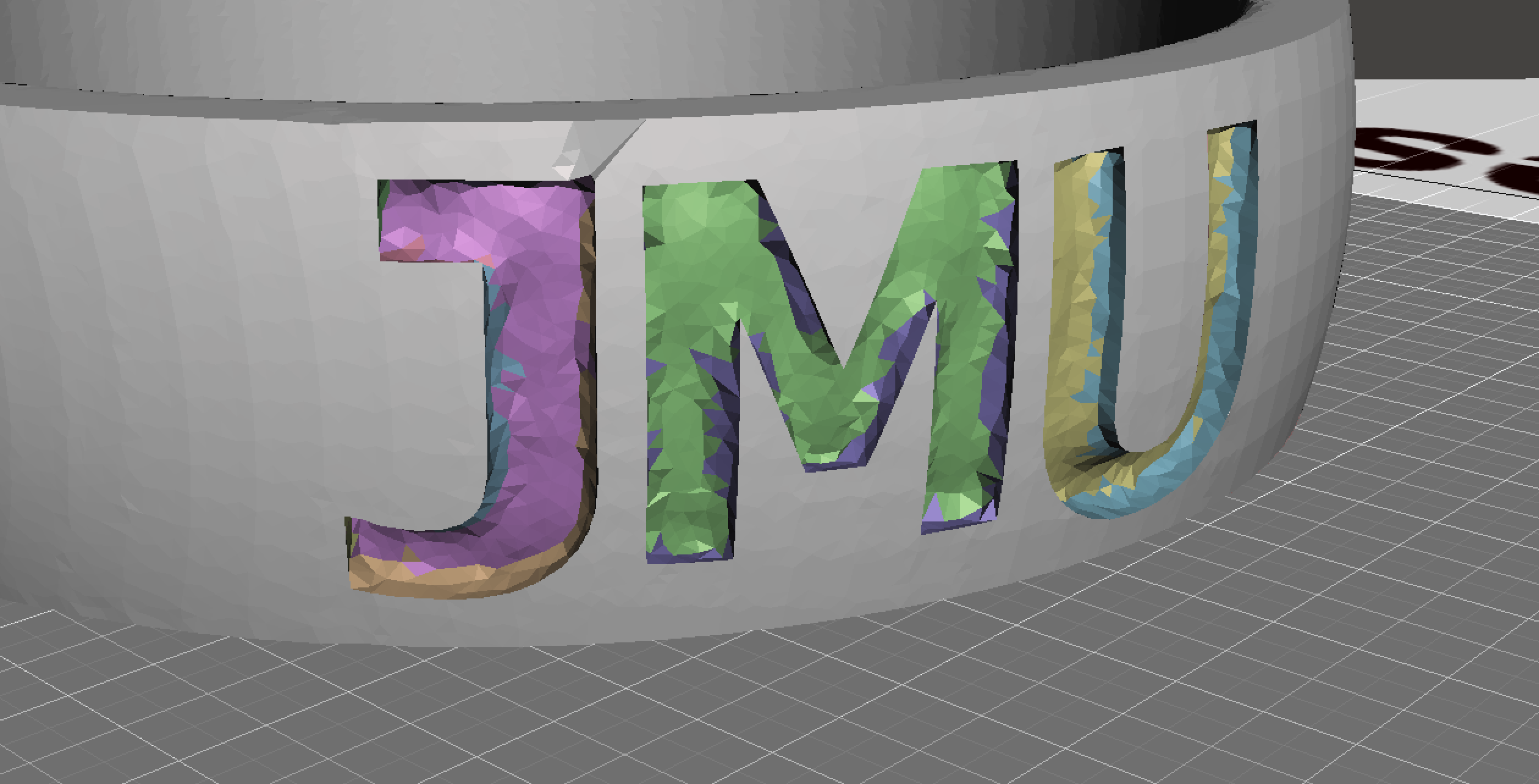 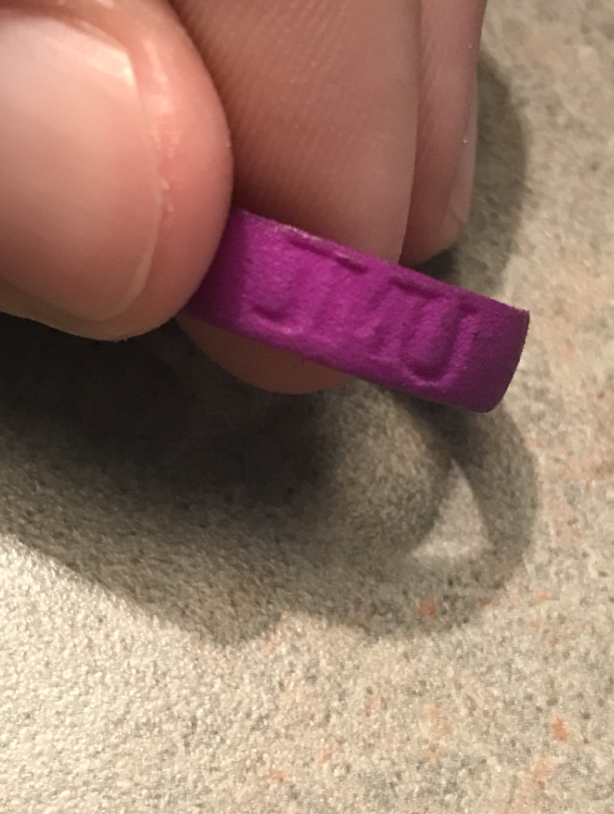 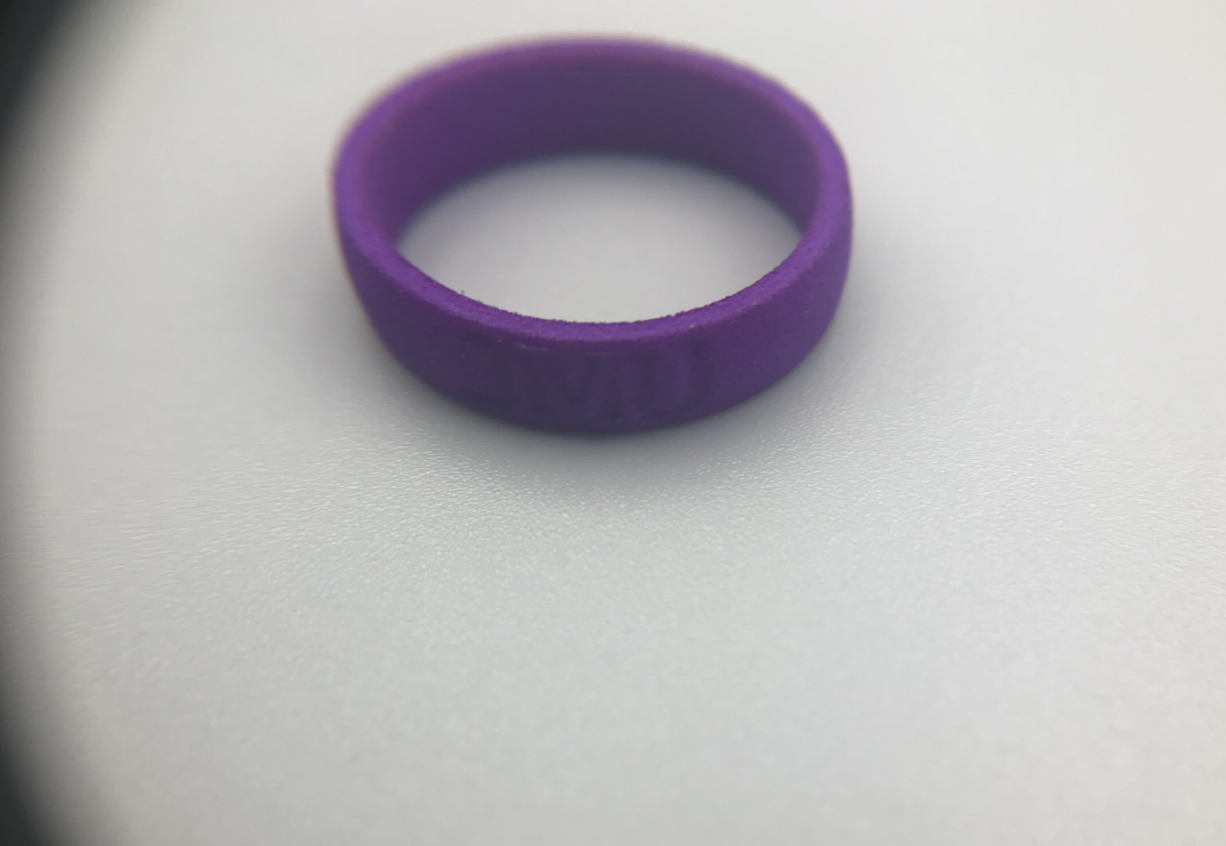 I actually really like the way this turned out. Originally my plan was to give this to my mother as a gift, if it turned out well, and re-order in a nicer material. However, I found this material to be unique and cool as it is. The purple matches pretty well with the JMU purple. The JMU on the front of the ring, although hard to tell, came out way better than anticipated. Still, my plan is to give this as a gift for Christmas, I think my mom would really enjoy a personal gift such as this!