So, first and foremost, I have tried using code before and this only reiterated by original consensus that code is not my strong suit. With this in mind however, I definitely wanted to make something simple yet absolutely crazy. Try to expand to the fullest something simple and make it crazy. The feature I liked the most while you were walking us through OpenScad was without a doubt the twists. As the class approached where we were to have a design and code ready, it was the night before and I waited too long to begin. OpenScad would not open on my computer. I shouldn’t have waited as long as I did and as a result, I never figured out the issue until it was class time. Thus, I didn’t have my code or first design. After class, a little frustrated, I drafted my first design. This design was to start playing with the twist code and try and alter it in order to make something as wild as possible.

The First OpenScad and Print

The fist design started with just making one twist to simply see what I could do with just that one extruded object. As you can see I did a few things. I made the center false in order to align it, adjusted the slices, increased the twist, as well as made the twist start in a different position other than the center. 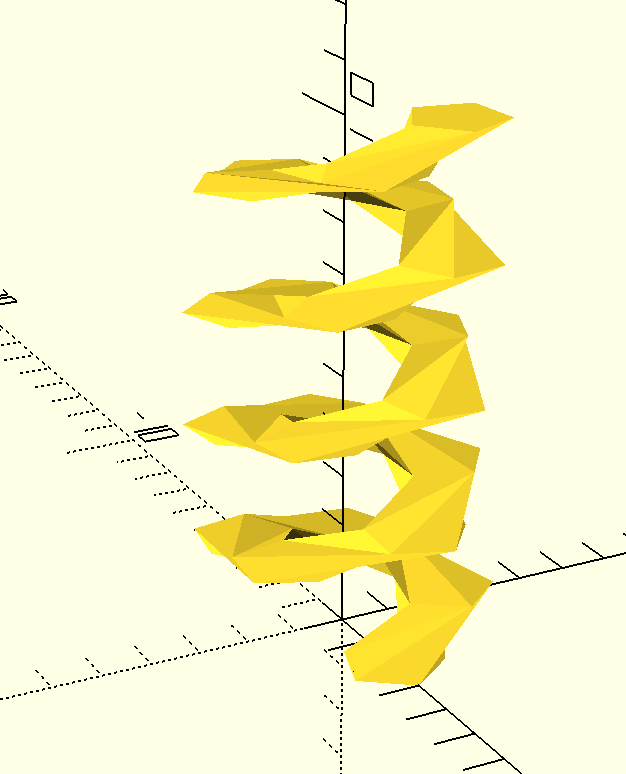 I thought the twists looked pretty cool so I started another another draft where I added a second twist the reflect each other. In order to do this I made one of the twists identical but made the twist and translation negative. 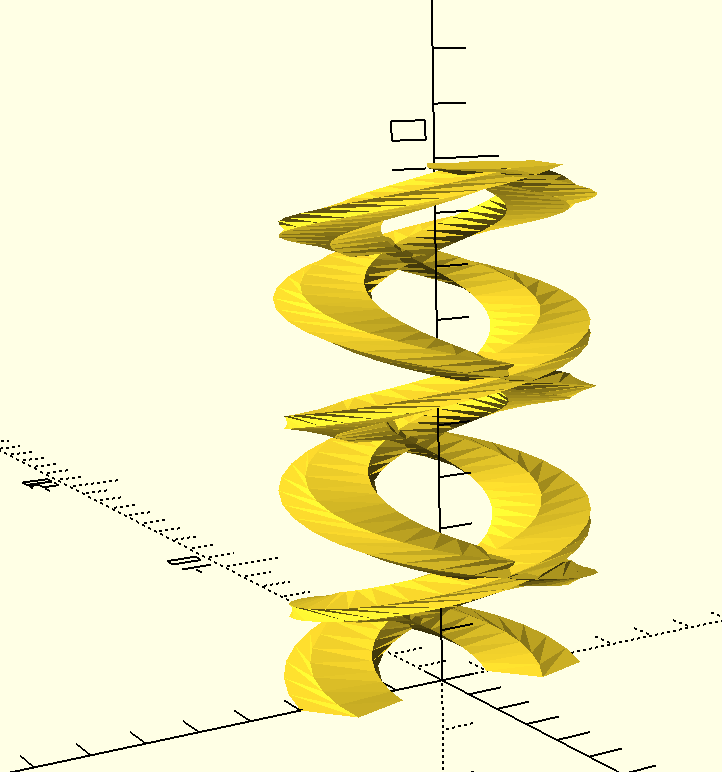 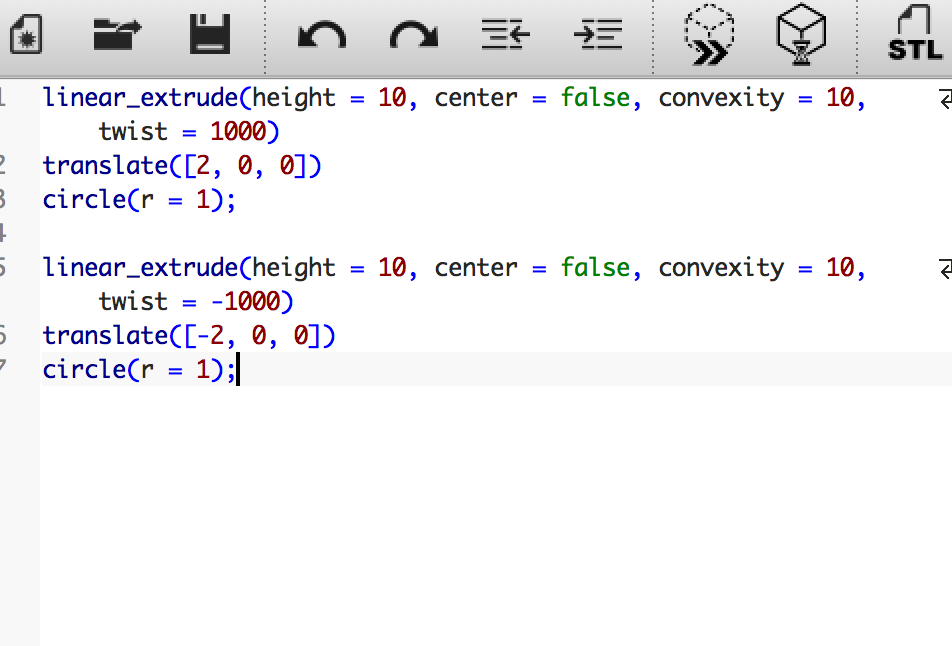 This Idea absolutely levels up compared to the previous design. I was a bit afraid to mess too much with the originals in fear that I could lose track or mess up and have to start over. Now, I let loose and mess with absolutely everything as well as add a 3rd object.

This idea was definitely starting to come together but I felt like something was missing. So, I added a center bar. With the previous ideas implemented, I wrapped it around the center bar. Now I could really play with the dimensions. 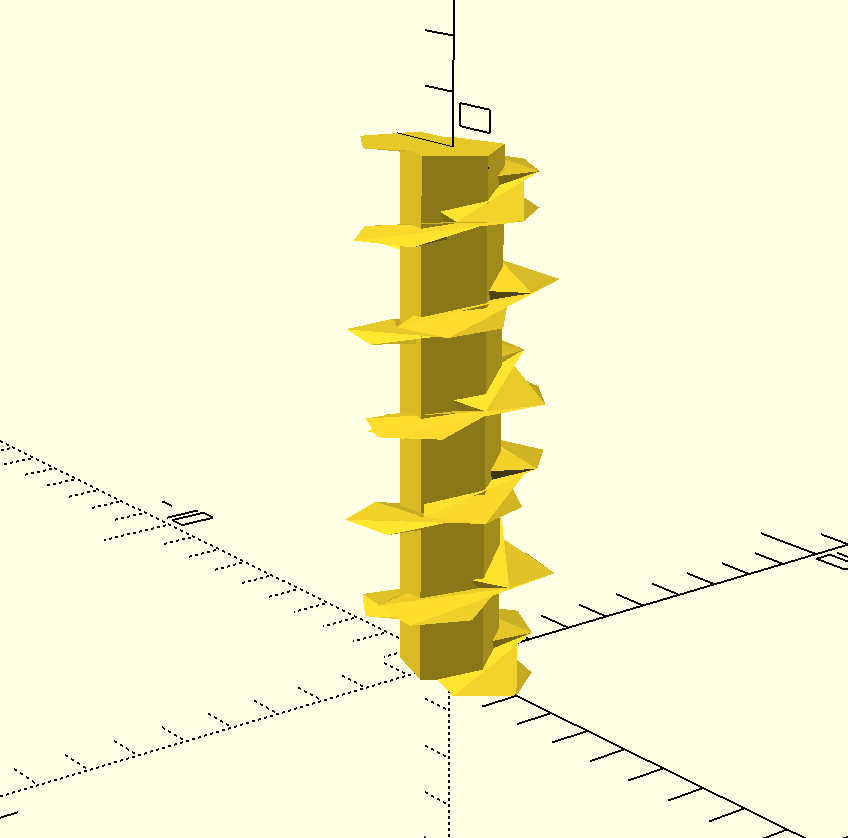 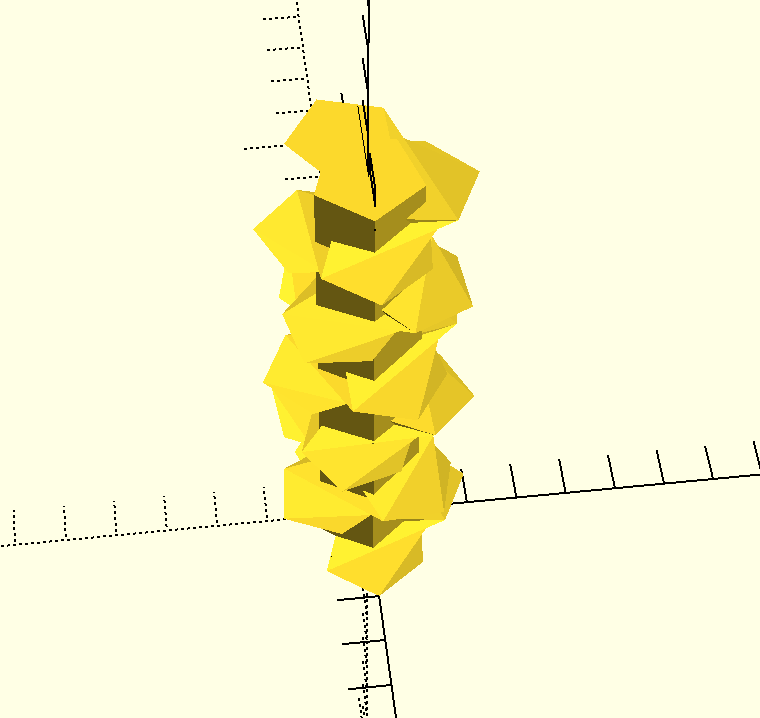 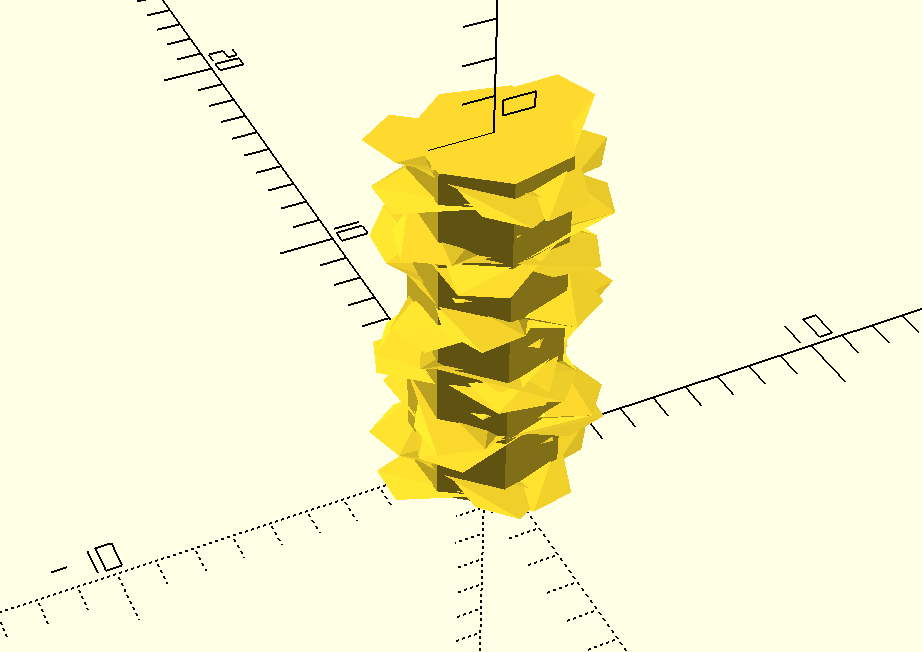 As I began wrapping up into the final aspects of my design I played with everything possible in the code. Below is the final product I developed. I found it to be, in a way, crazy and creative in the sense that there is no rhyme or reason to what I did. Many people took already made objects and tried to re-create them. This, Is just a funky design with anything and everything adjusted. Like the previous designs, I recreated the double twists and added the center bar. I added a lot of twists as well as cut down on the slices in order to give it some texture and character. In order to make the object seem uncentered, I made the radius of the twists different from each other. 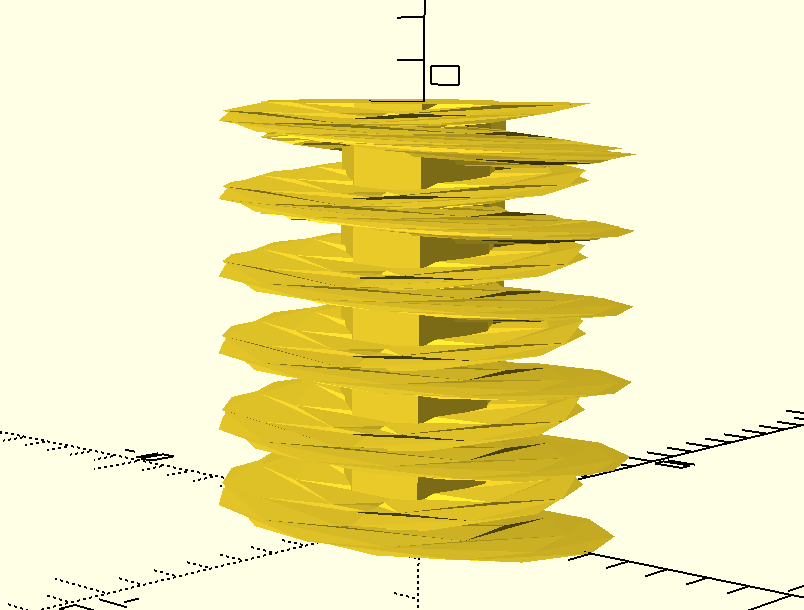 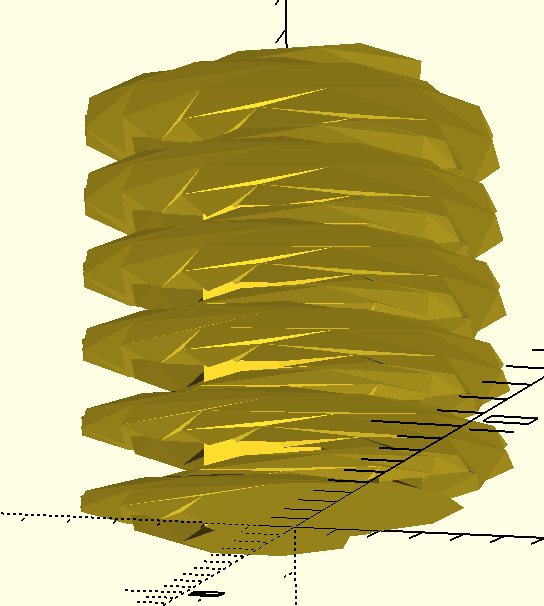 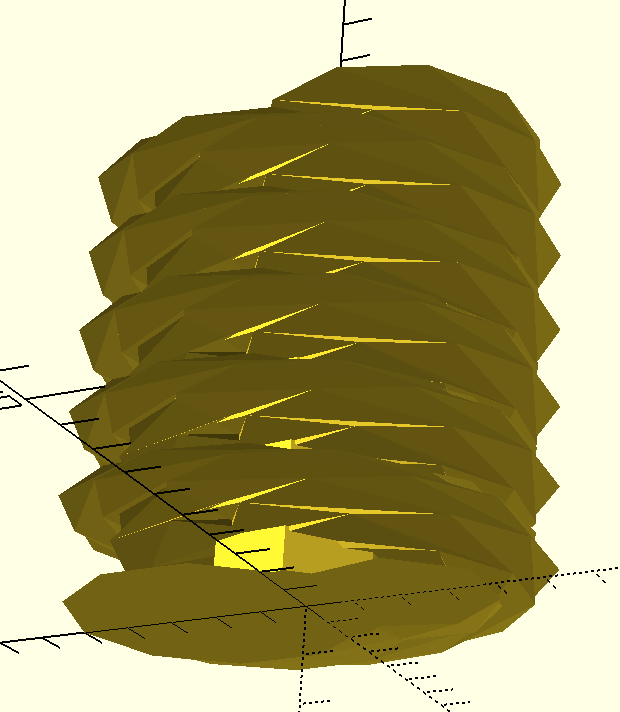 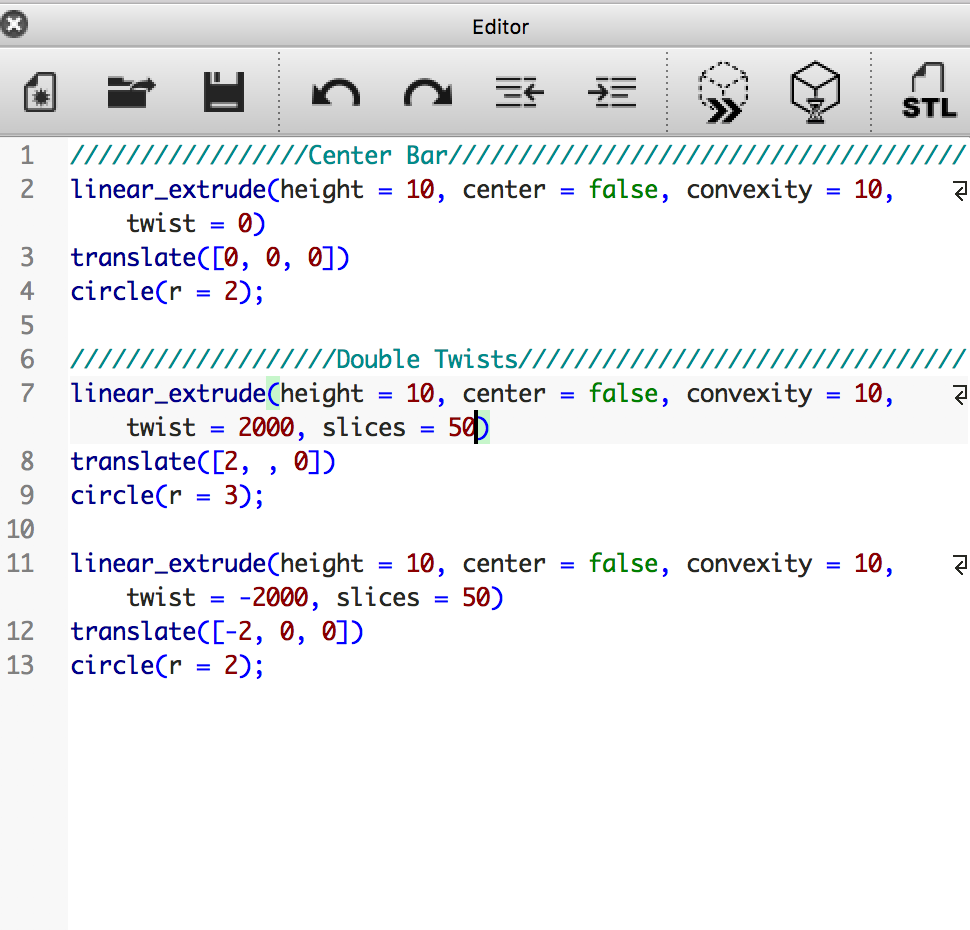 I was excited to print this for everyone to see, I was in a way proud of how there was a type of unique and weird aspect to this. However, as I went in to print in the morning, the printers were all out of material or in use until class time. All in all, although dreading using code, I had a good time creating this. It brought out some creativity and individualizes a new idea from something that was plain and simple. Also it may motivate me to try some code again!