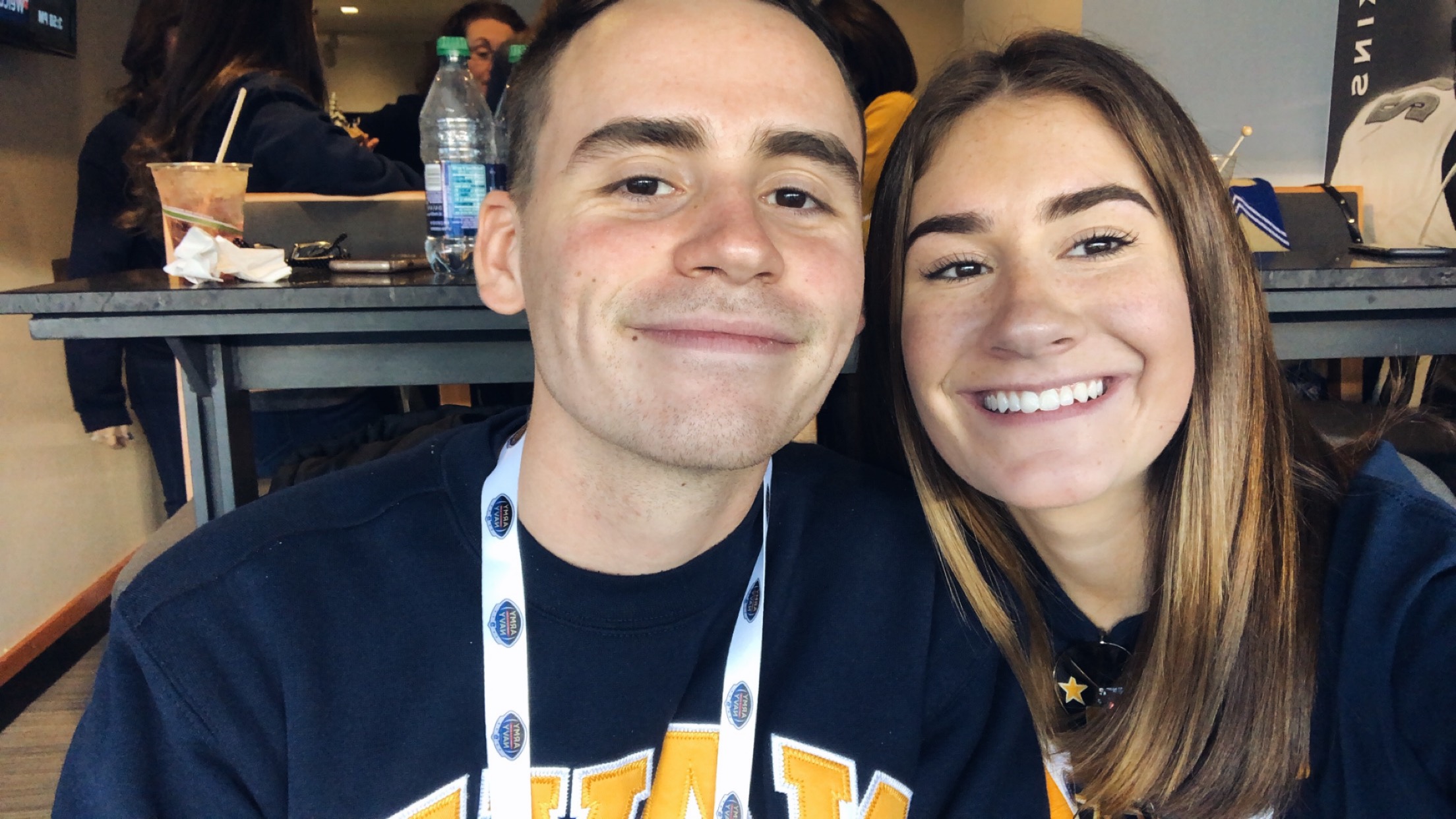 My name is Kelly Festa and I am currently a junior. I am a finance major with a concentration in European Business, but honestly, I have no idea what I want to do with that yet. I’m from Syracuse, New York, which is a lot colder and snowier than here, but I’m so happy to be in Virginia now! I’ve accepted an internship in D.C. for the summer so I’ll be living there for the summer, and I plan to live more south in a big city after graduation. I love to travel and workout and I recently studied abroad last summer, which was incredible! My favorite places I went to were the Amalfi Coast of Italy, Vienna, and Greece. I love the summer and sunshine, and I can’t wait to travel more as soon as possible!

I have no experience in 3D printing, but I was amazed by what I saw in the first class, and I’m excited to see how I can learn and grow this semester! I’m hoping my 3D printing experience will improve, and that I can become better at it since unfortunately, my penny trap broke and did not turn out too well. 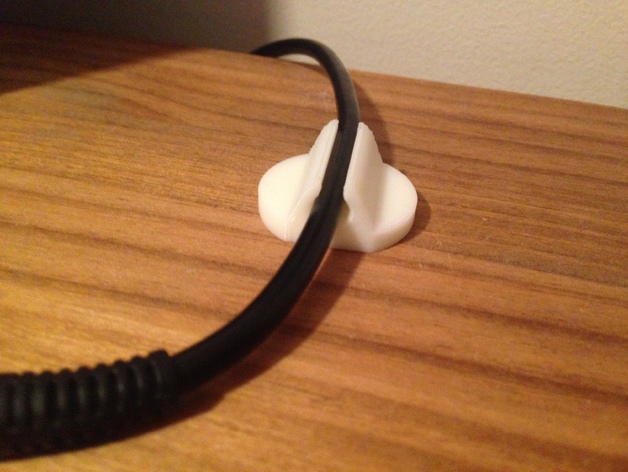 I chose this model because I wanted to make something useful. I constantly get annoyed when my cords are getting all tangled and when I reach for my phone charger in bed I can never find the cord! I thought this would be helpful, while still being easy enough for my second time ever 3D printing. 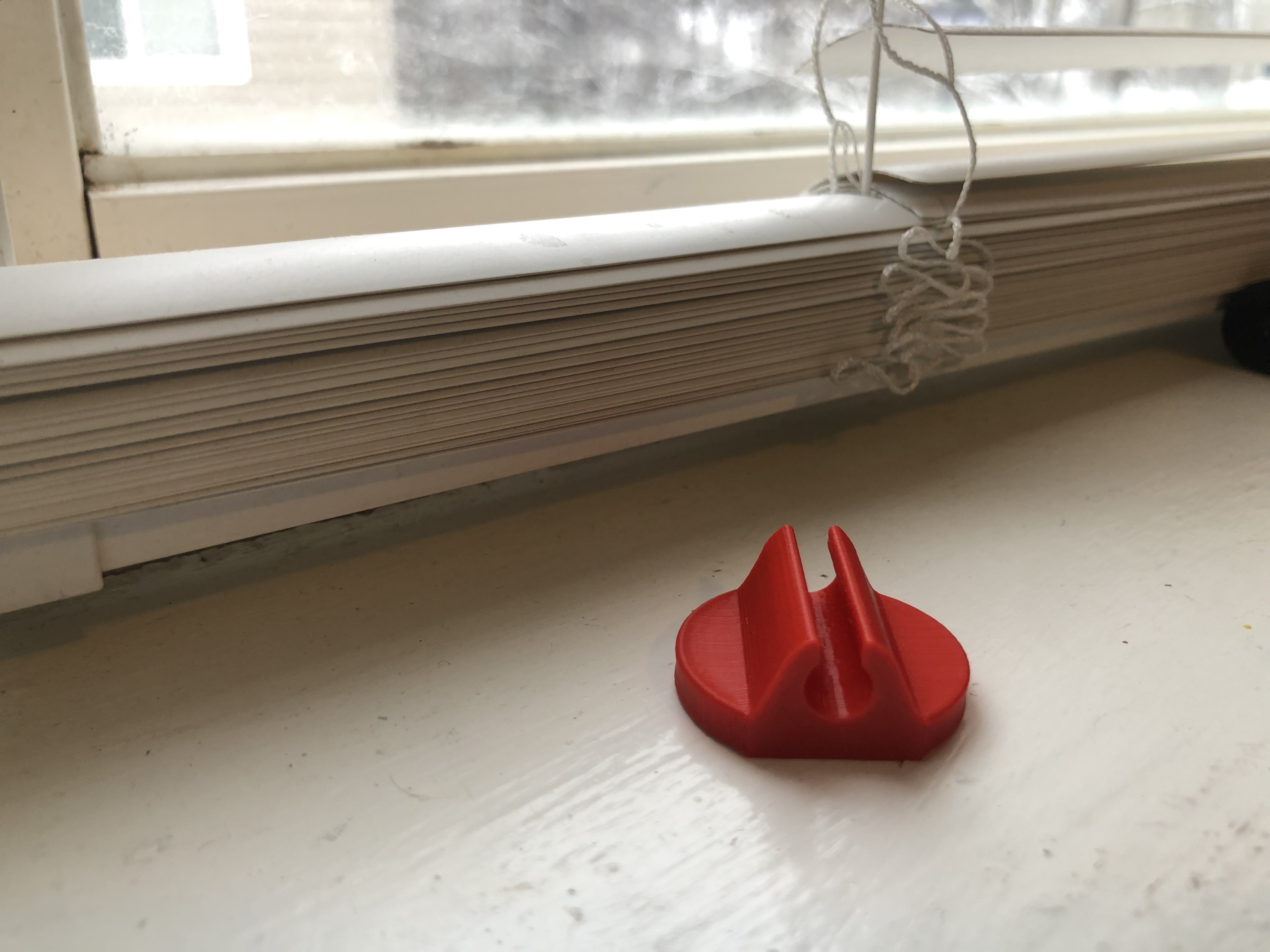 I’m actually very happy with this print! It turned out well and I had no problems while printing it, and it was successful on my first try. This was very pleasing to me since my first penny trap broke when I tried to take it off the printer, so this time I was careful removing it from the printing surface. I already began using this to hold a cord in place, which is exactly what I planned to use it for, so I have no complaints. 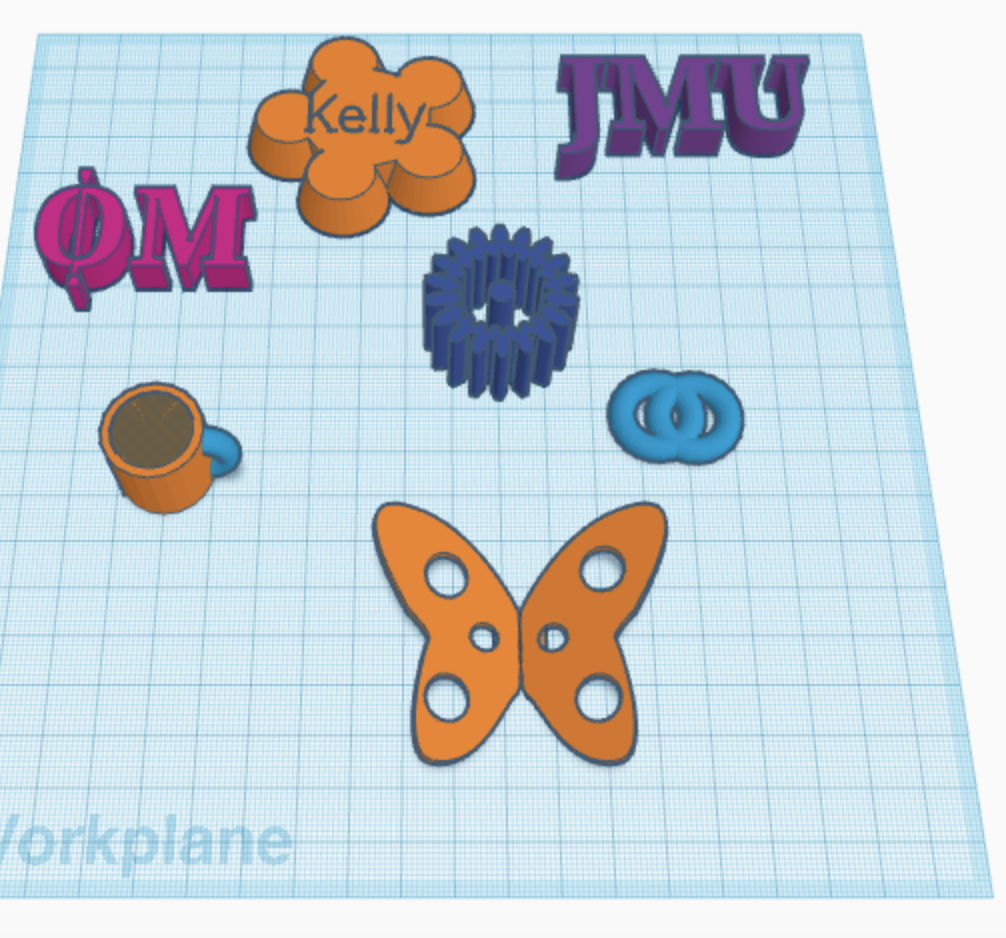 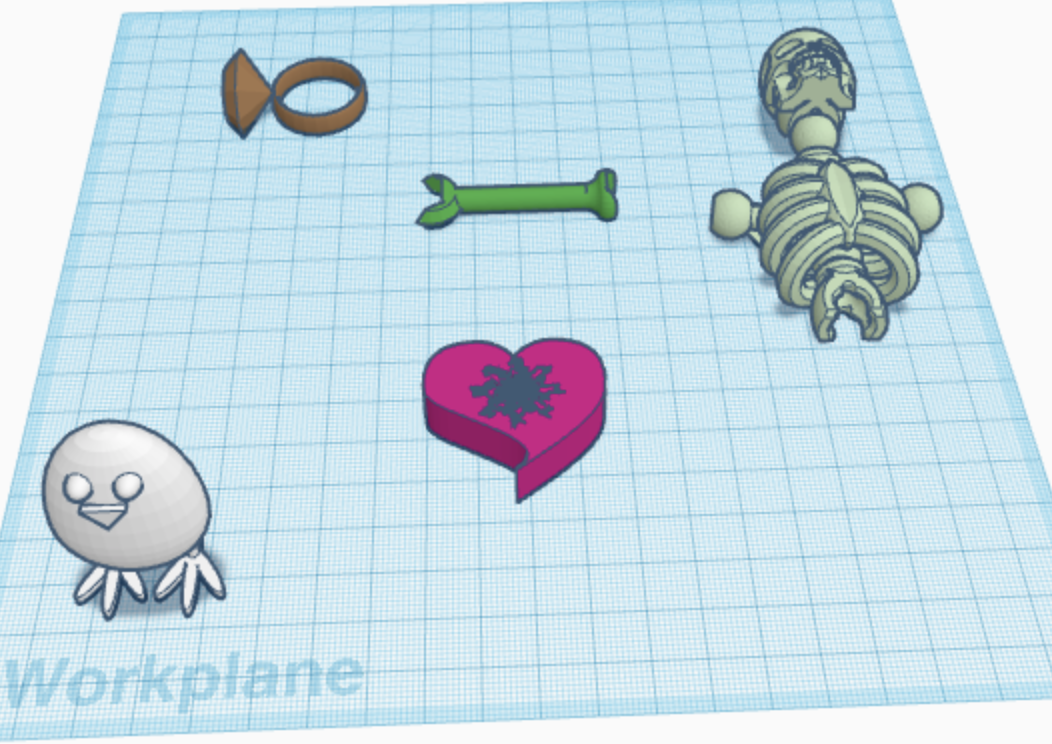 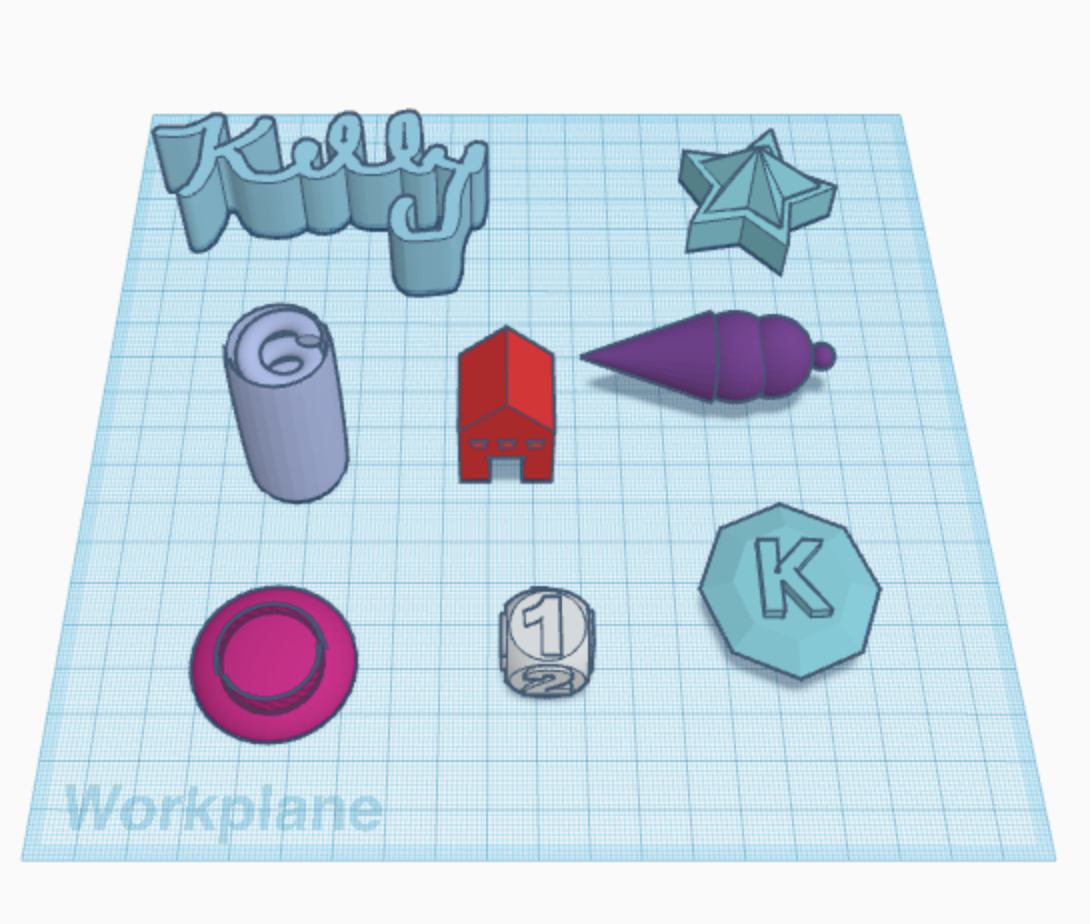 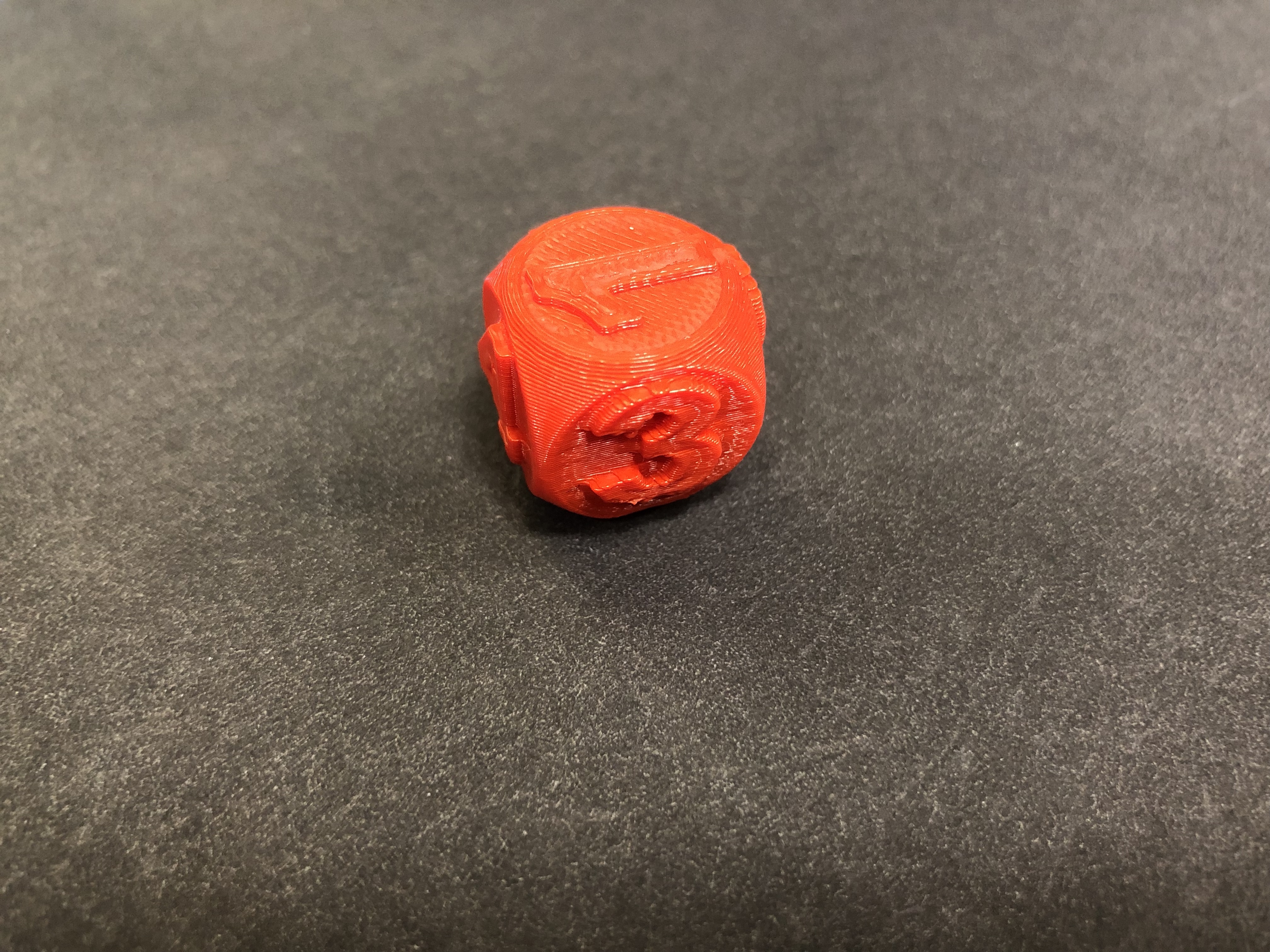 I was very happy with how this print turned out, although it is not the most interesting object, it turned out as good as possible! I was worried about printing some of the other forms I made because I didn’t know whether the dimensions would be too small or too large so I’m happy I chose to make the dice. The only complaint I have about this print is that some of the numbers are a little bit larger than others, and some are a little off centered. Overall, I’m happy with how it turned out since this was the first form I’ve actually made on my own.

My project was the Honeycomb Personalized Keyholder and my partner was Gabby Dermody. I thought this was a fun project because I liked being able to bounce my ideas off my partner and get feedback from a different point of view. It worked out well because Gabby is a graphic design major so she could help me create my analytical ideas in a reasonable and realistic way. Our project turned out really well, we each personalized the keyholder, she used her roommate’s initials and I made mine with my house number. I am very happy with the final result because it is something that is interesting and visually pleasing, while still being functional. When I started this project I was expecting it to be a fail so it was amazing to see our ideas actually come to life and work! After our class discussion, I realized the hooks might be a little too flimsy for heavy keys so I’m interested to see how it actually performs. 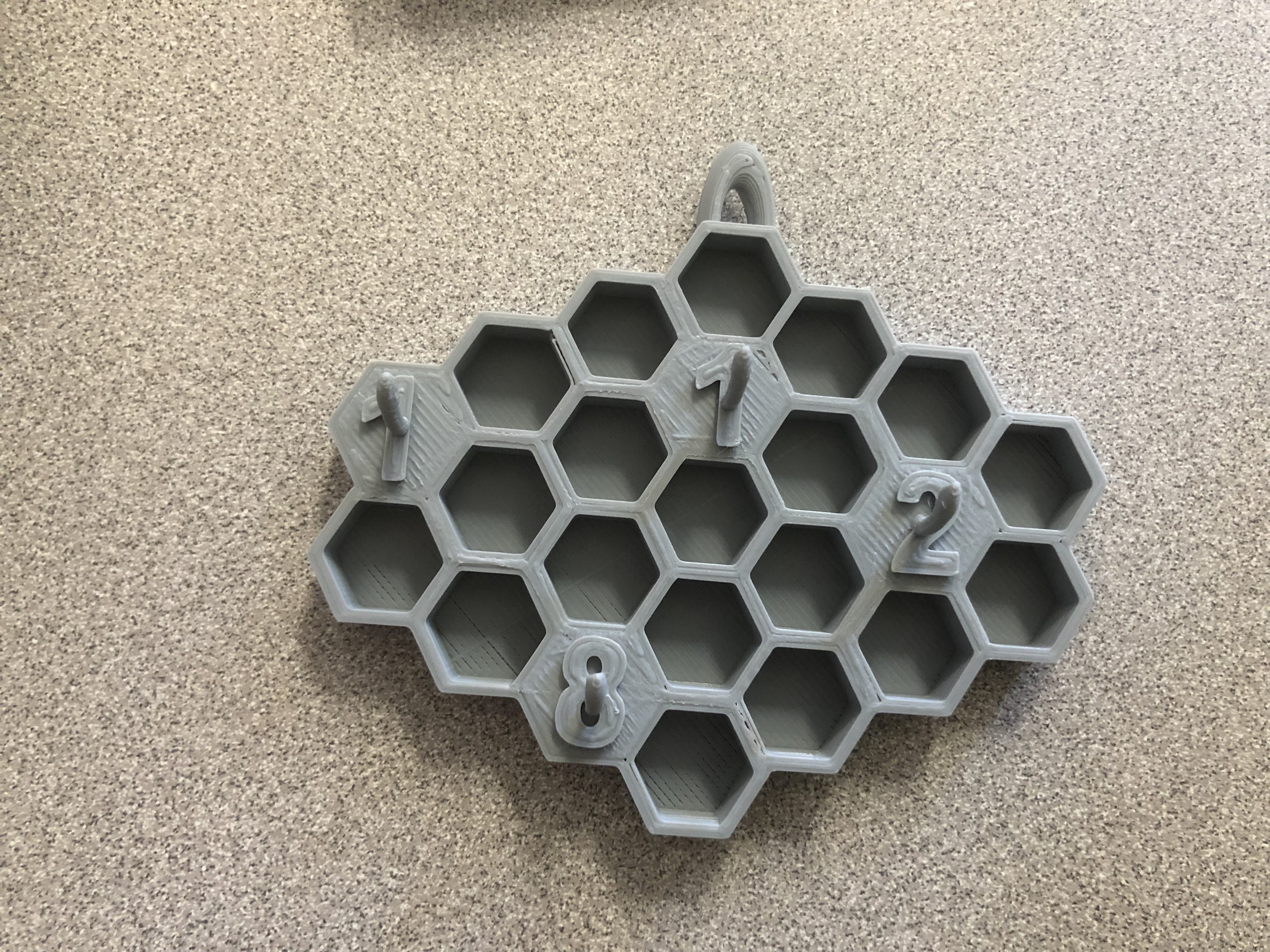 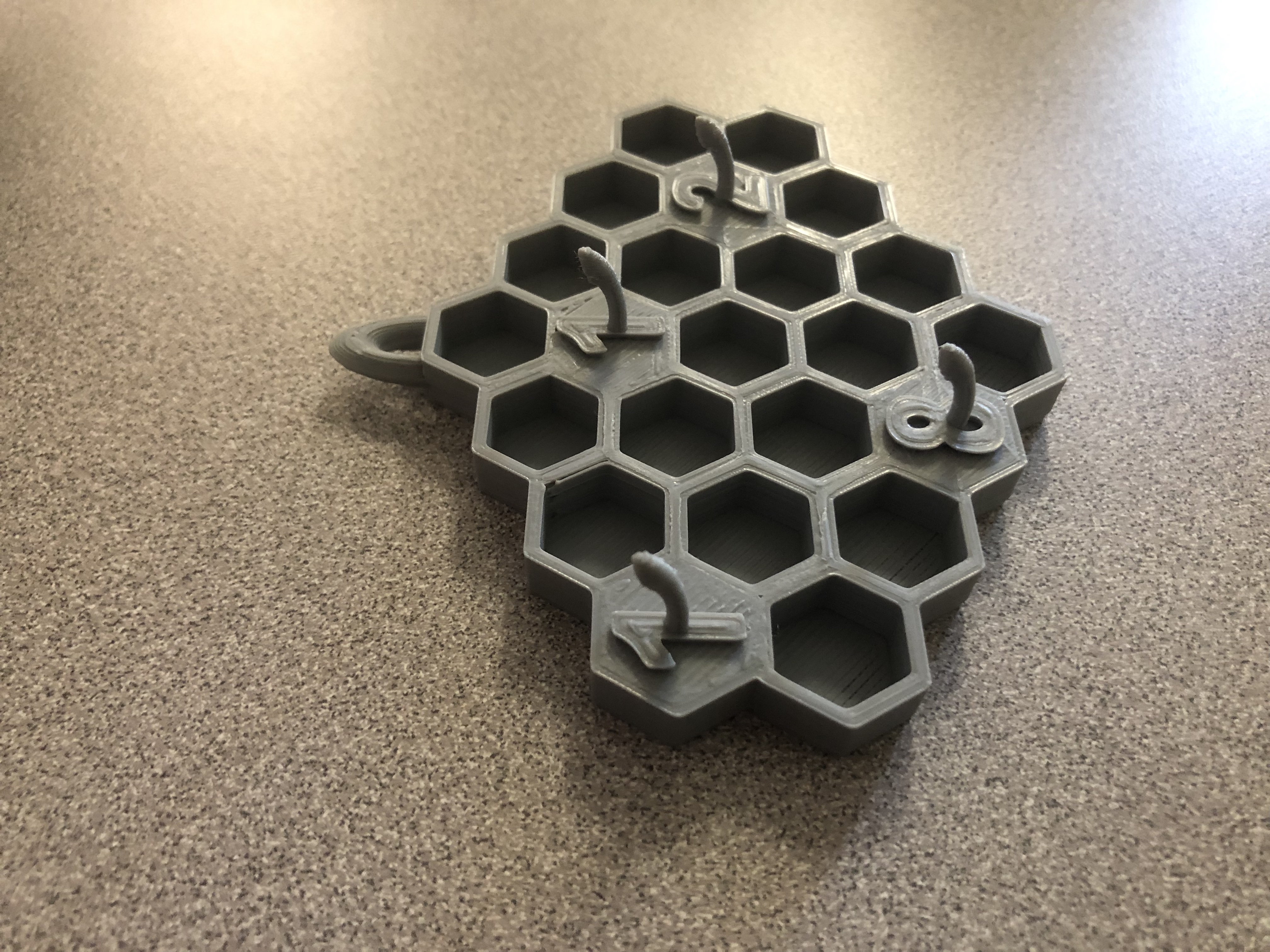 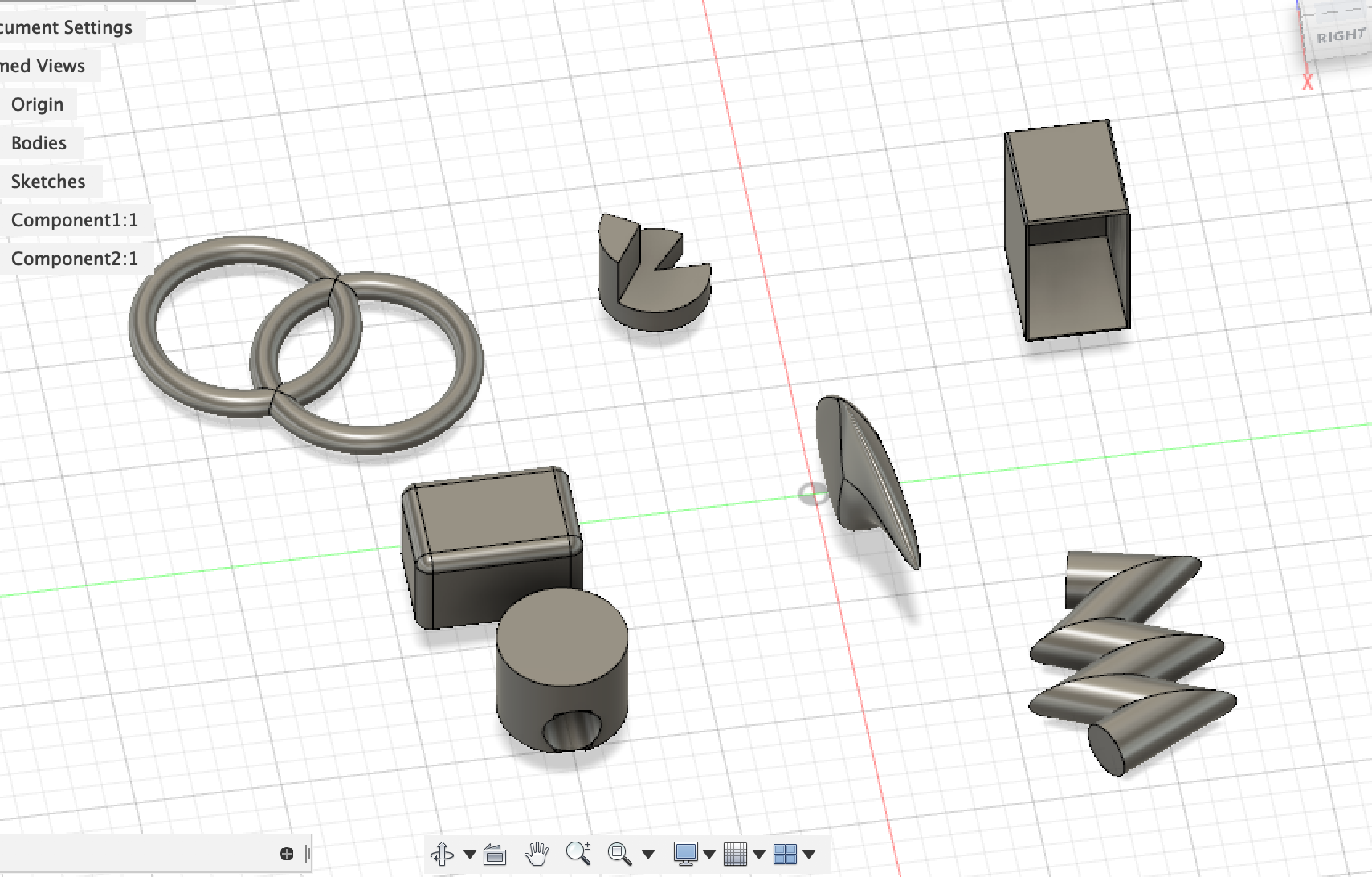 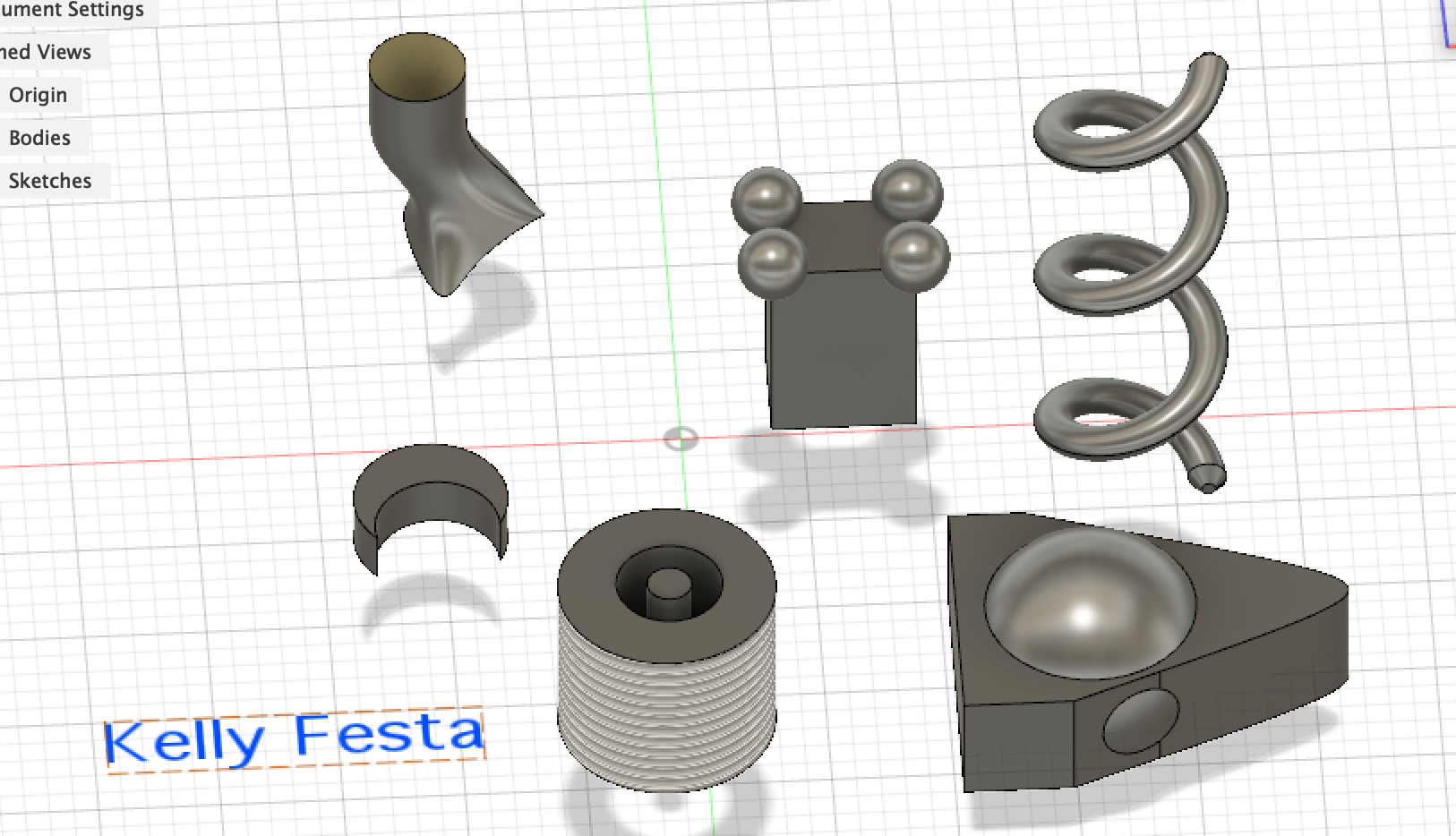 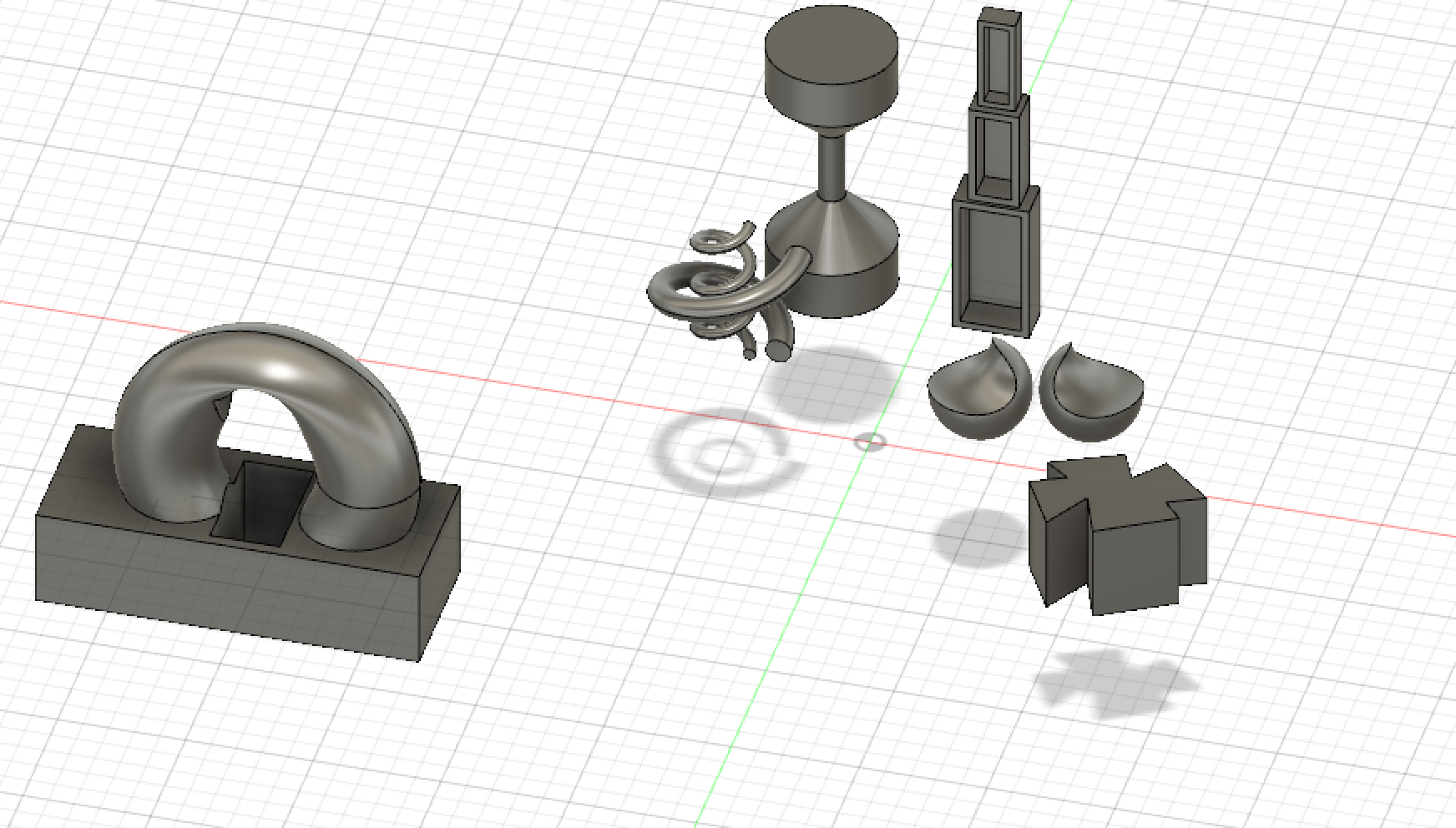 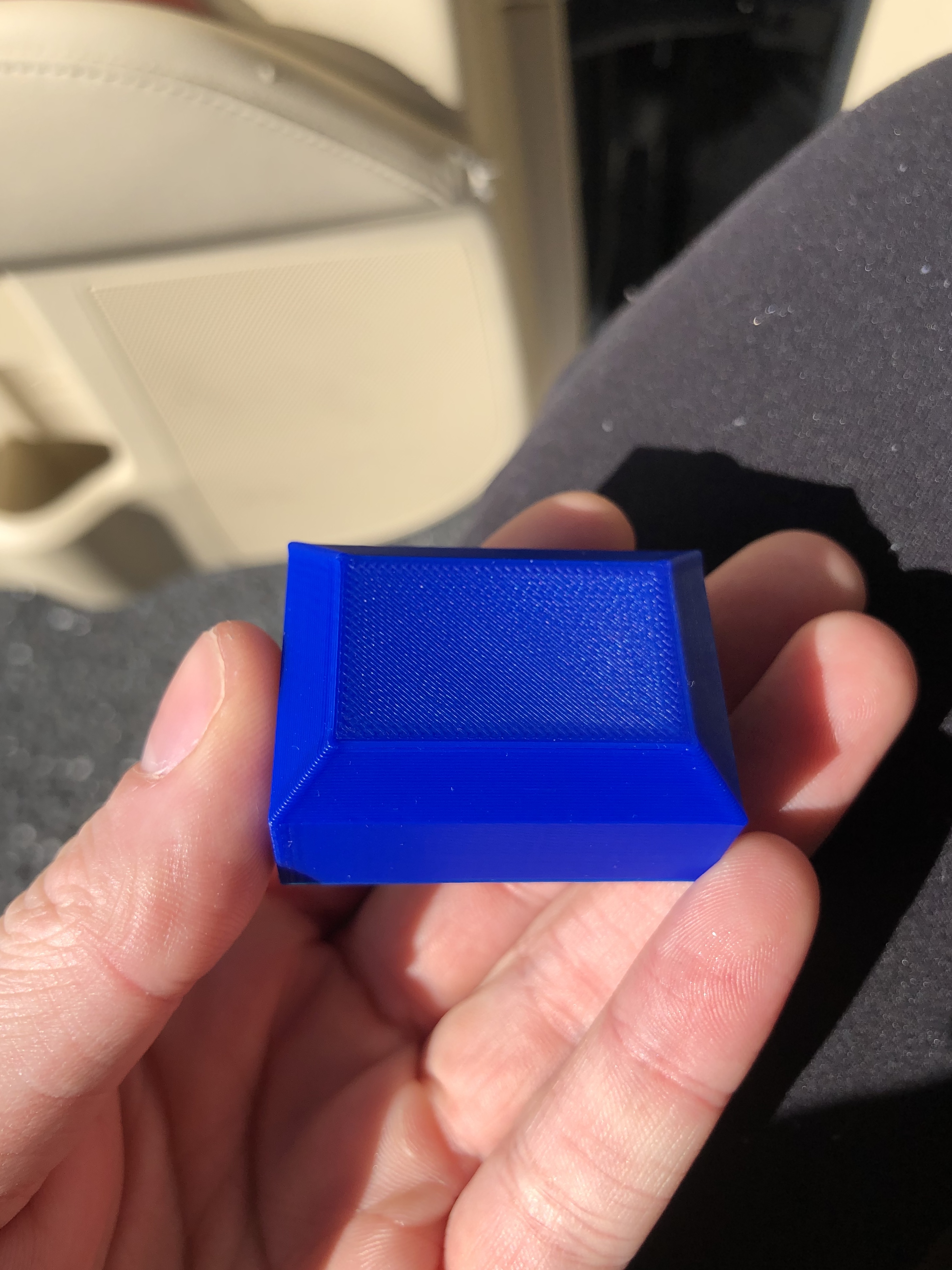 The print was a success, but unfortunately, I was having problems with Fusion 360 wanting to update on the computer when I tried to open my forms, so I just quickly made a rectangle shape and used the chamfer tool to bevel the top edges. But it turned out really well and printed flawlessly. Although I didn’t print one of my forms that I originally made it was still pleasing to see a form I quickly made print so well. I would like to print one of my other forms soon when I get the chance, just to try another one out and see my work come to life! 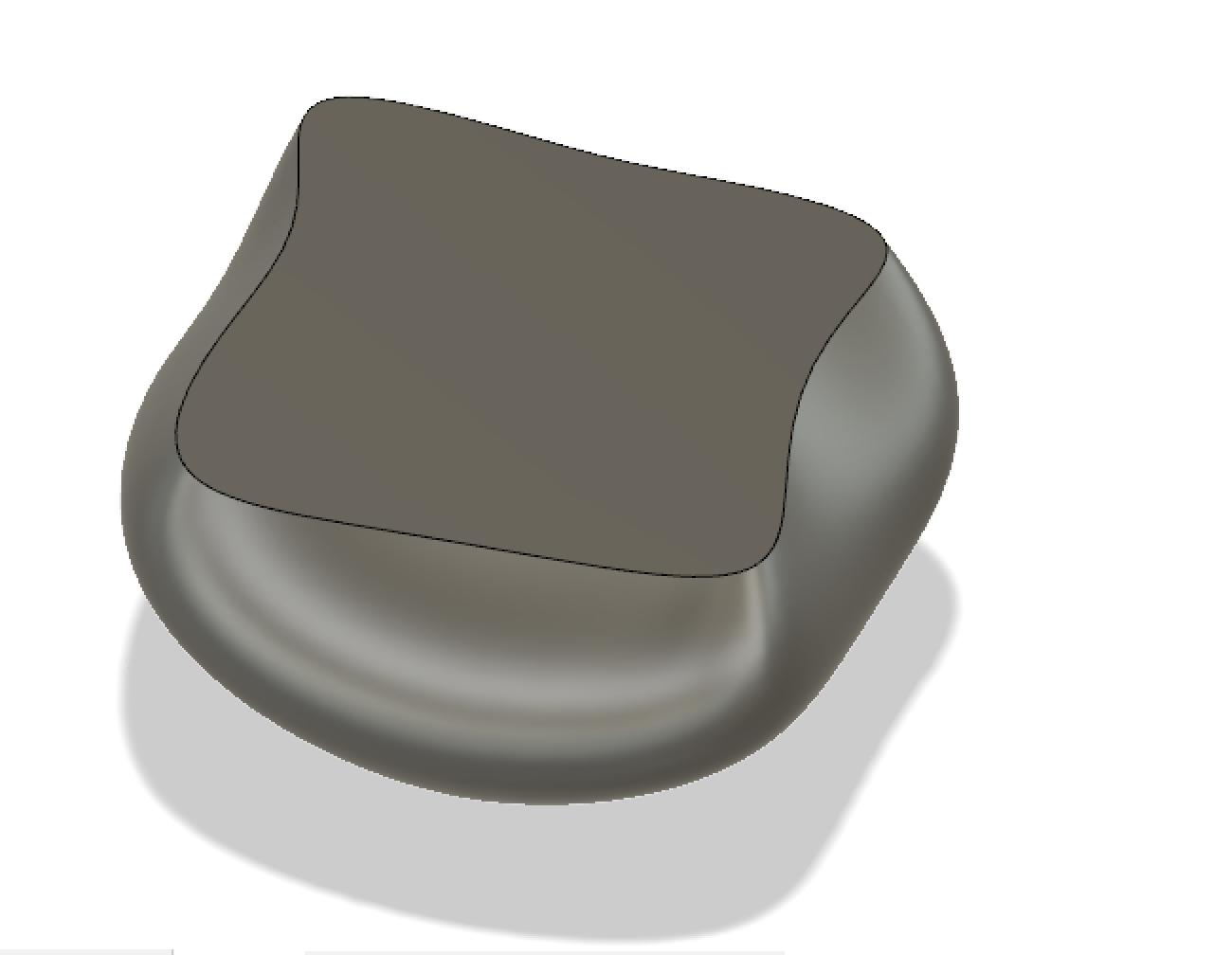 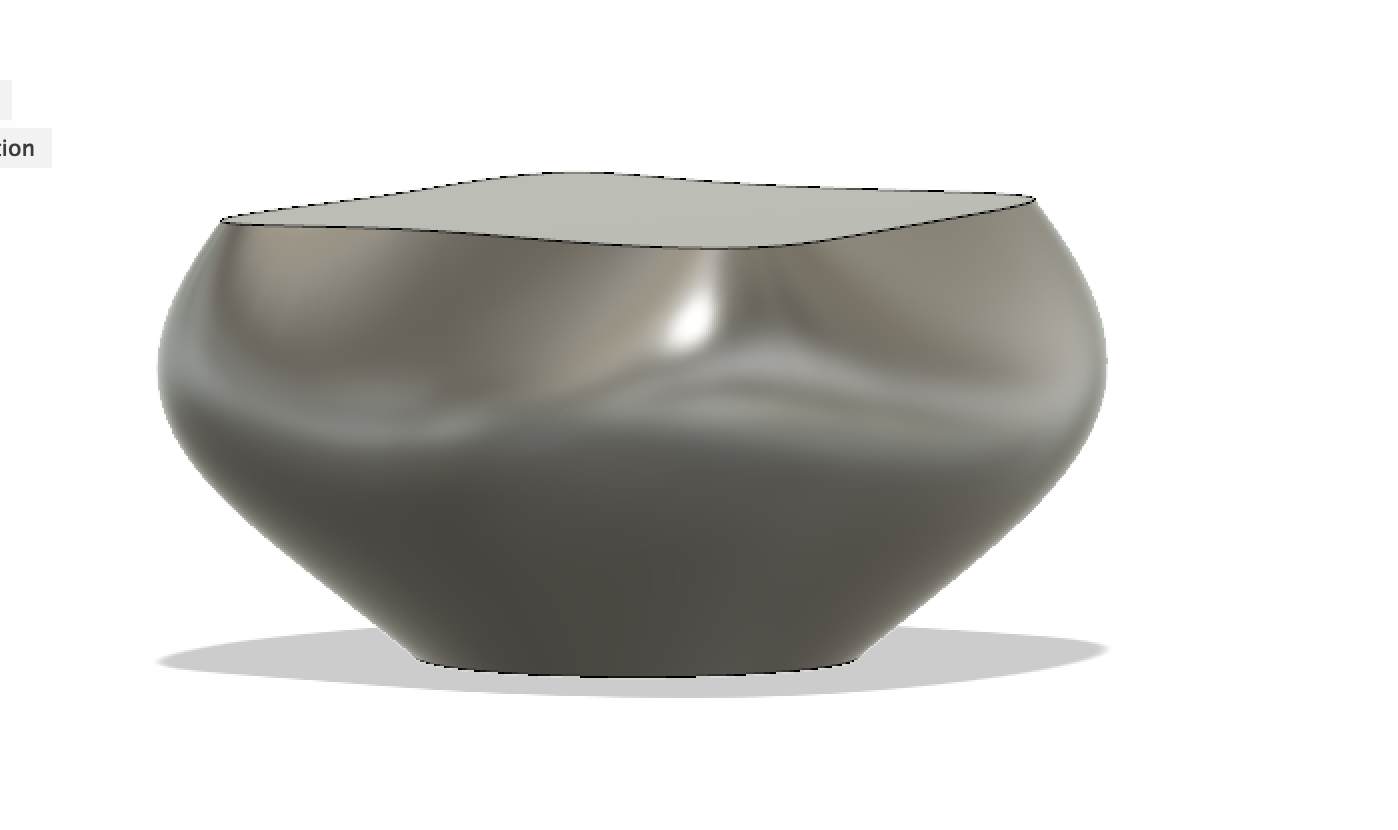 I started by using the sketch tool and made a circle right around the origin, then I made an offset plane up a little bit, and made another circle using the sketch tool still centered around the origin. Next, I began to manipulate the circle by pulling it to make rounded corners, and it ended up becoming more of a square shape with rounded corners. Then I used the sketch tool to make profiles along the side that curved out a bit, and I used the loft tool to make the form really come together. I selected the planes and the profiles along the side to make sure my vase turned out as I wanted it to. Lastly, tugged at the sides while it was lofted to make them curve and spin a bit more. It ended up becoming more like a large bowl than a vase, but I’m very happy with how my form turned out because I think this is something I could actually use compared to a vase, which might not have been functional. I used similar techniques to what was done in the video, but I put my own touch on it by manipulating the shape for the rim and creating an interesting profile that was visually pleasing. It goes beyond the basic design in the video because I used my own shapes instead of just using the spline tool, and changed them to be what I wanted, I also created a specific profile like I wanted instead of making it squiggly, I think my design is very unique and different from what everyone else produced. 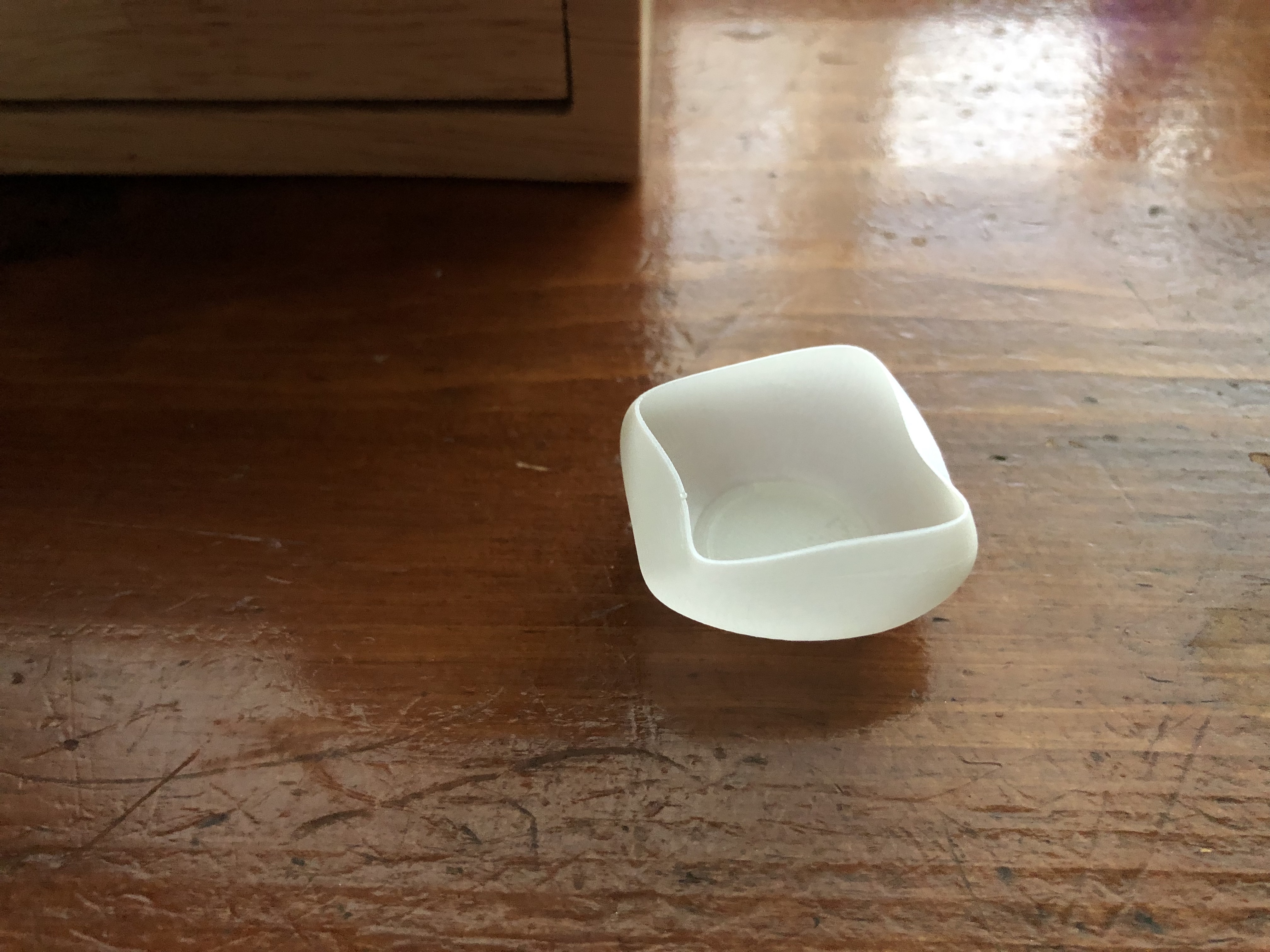 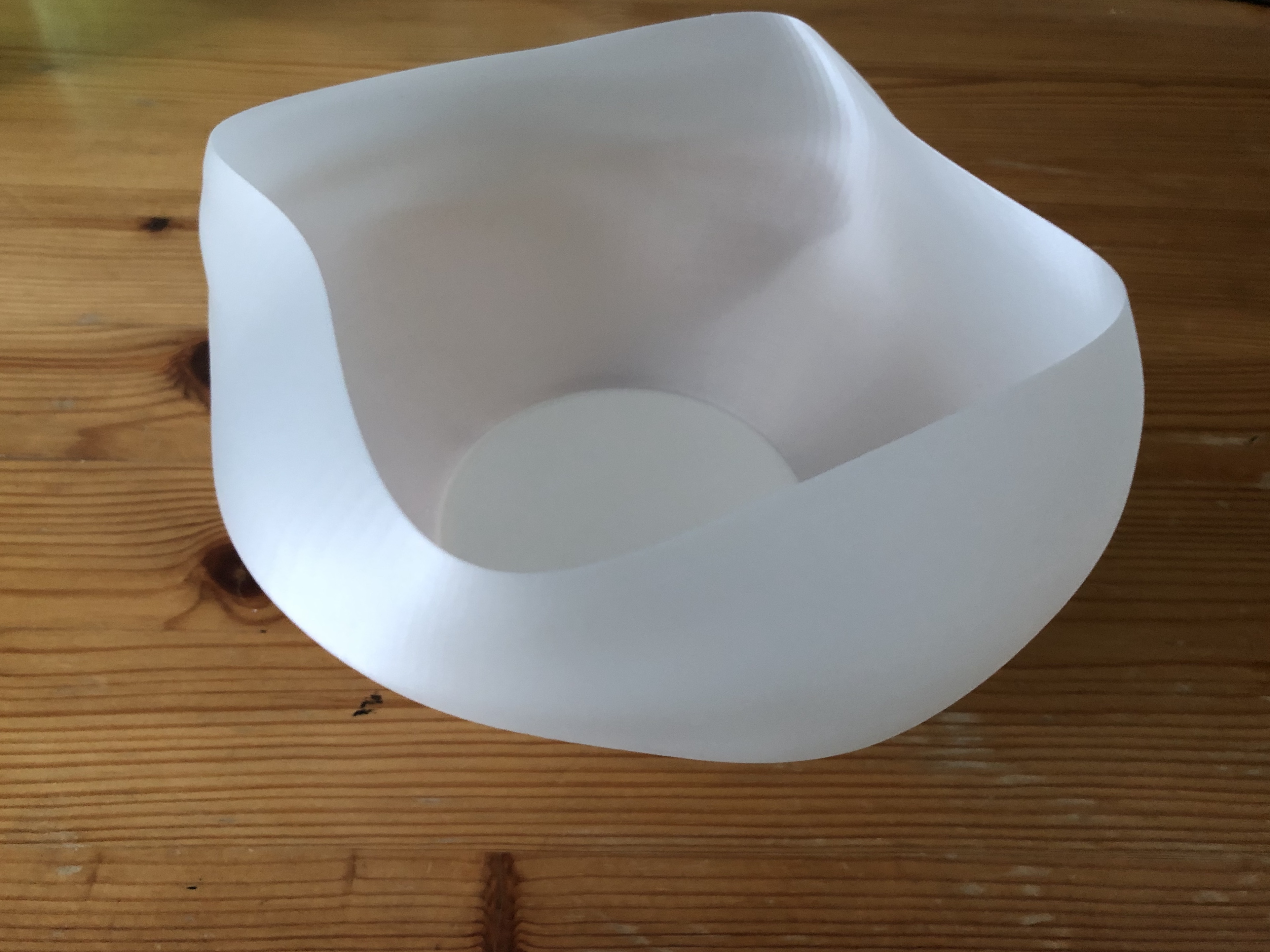 My vase was a success! I was very happy with how it turned out, it looks great and is an interesting form! I think this is actually something I could use, maybe as a pot for a small plant or just a bowl to hold some stuff in my room. Although it does not look like a traditional vase I think it looks great and is an interesting form that could not be bought. I’m glad I chose to make my form like this because this was the third variation I made, but definitely my favorite. 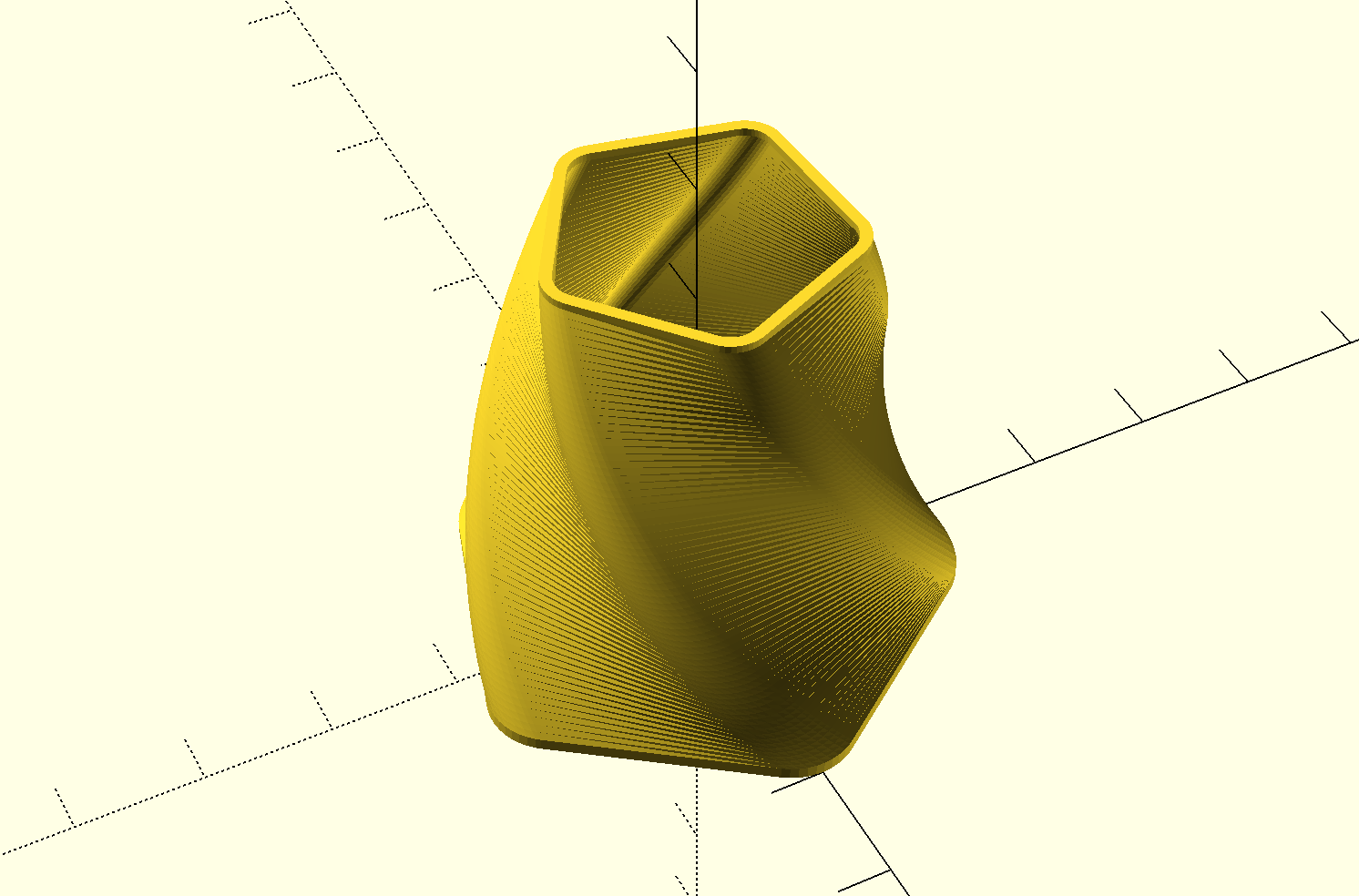 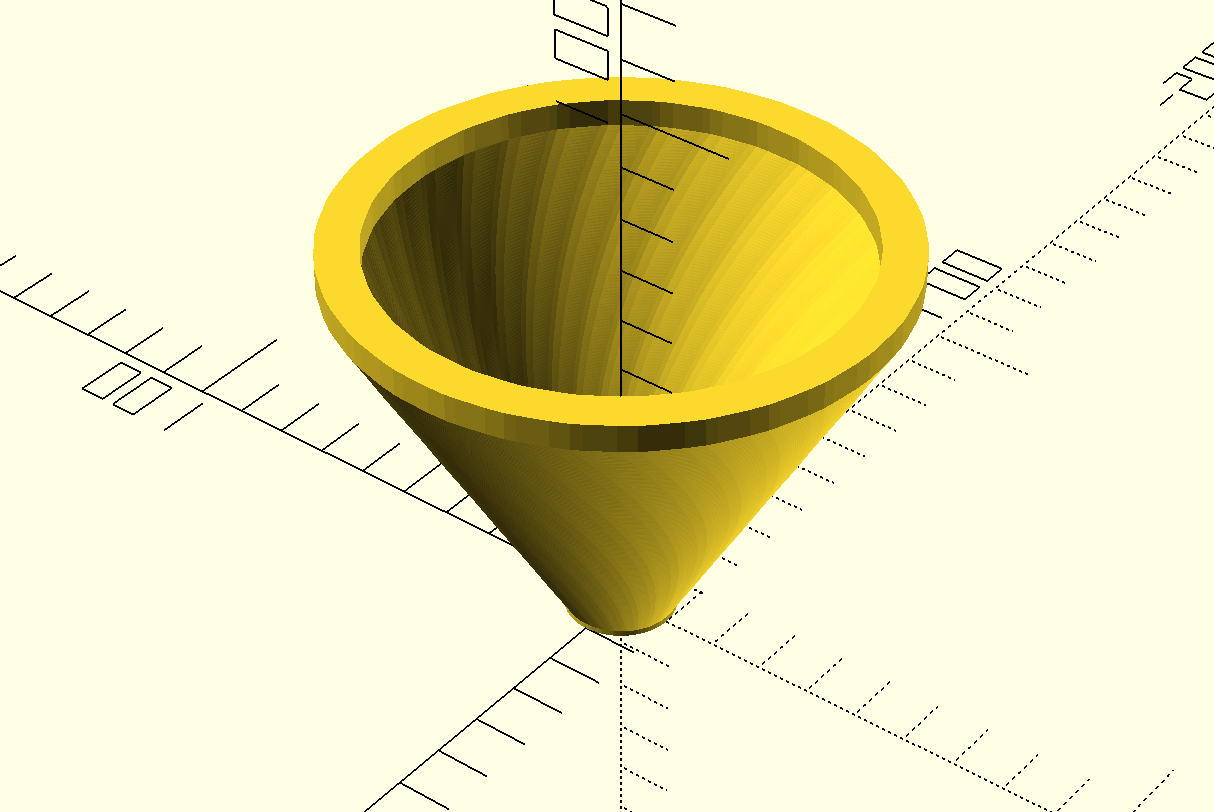 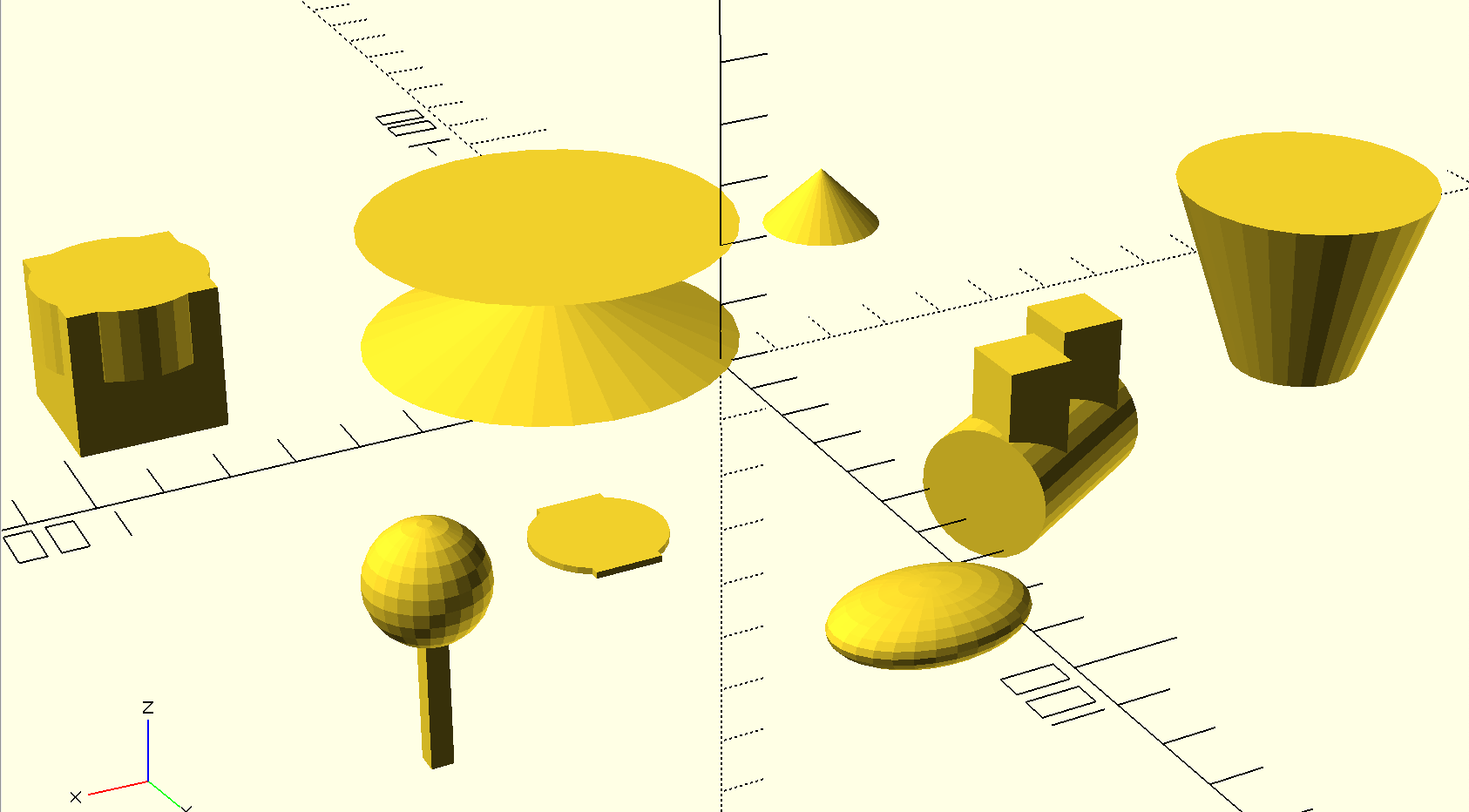 For these shapes I watched youtube tutorials to learn how to work with the software: 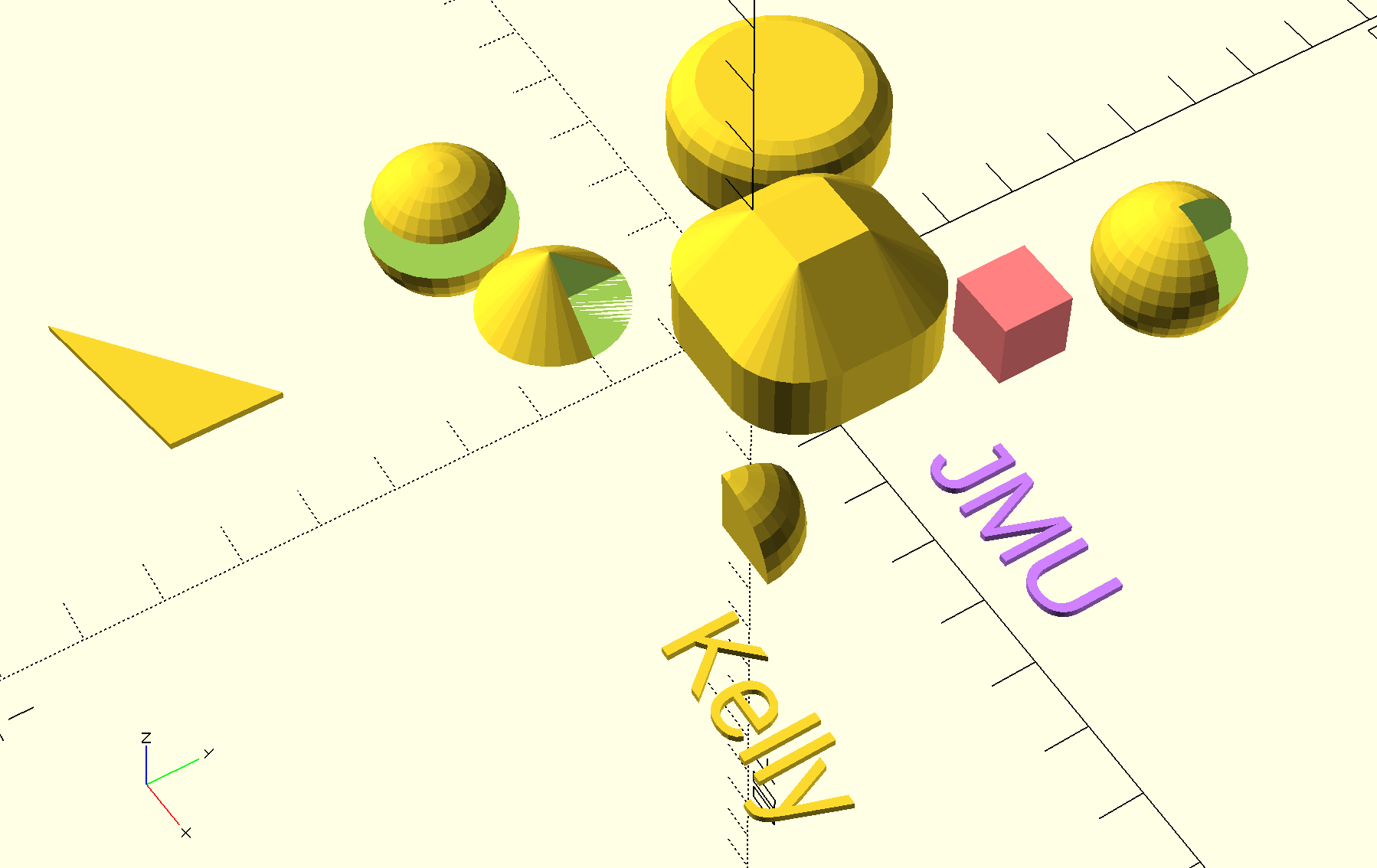 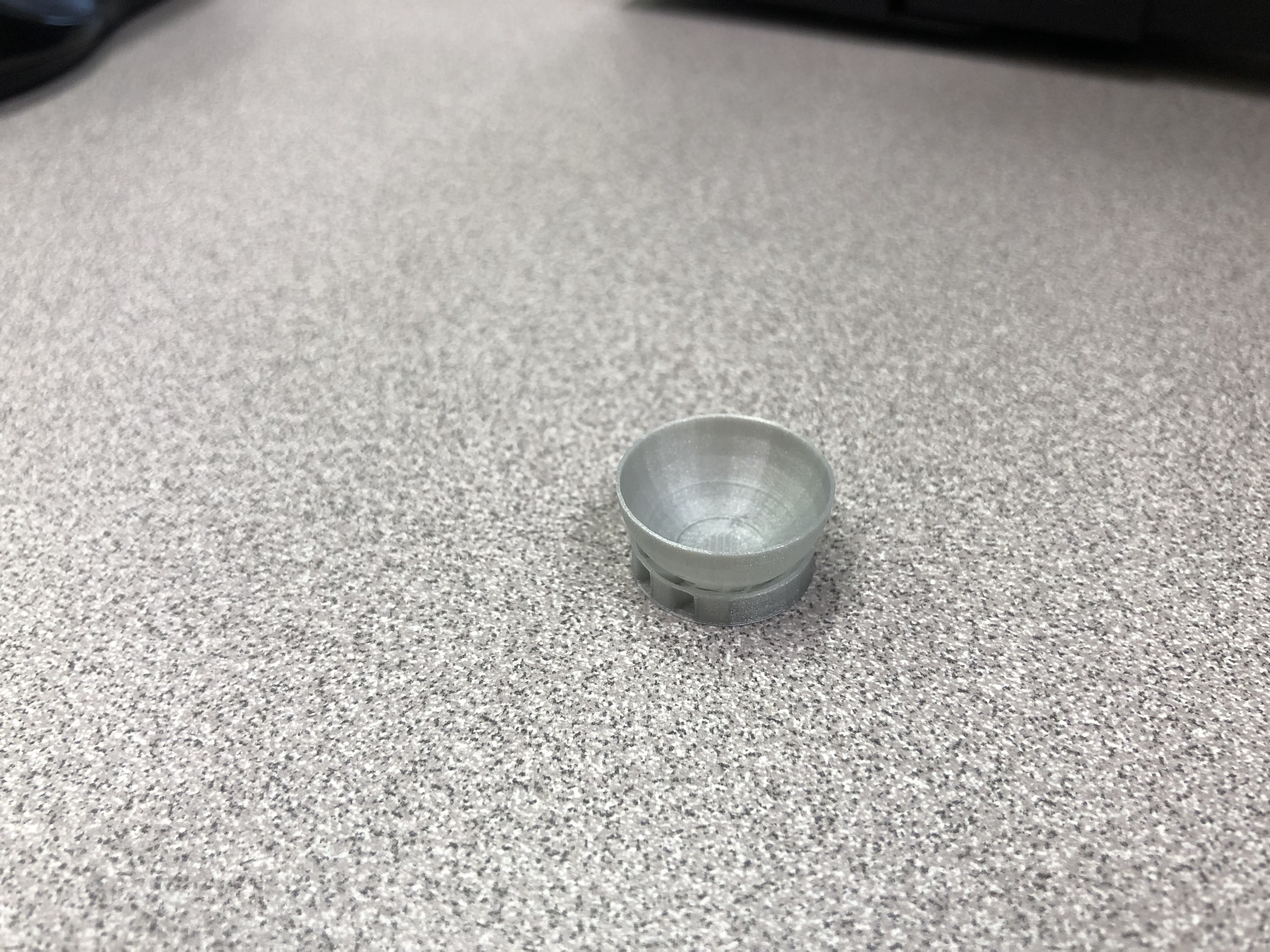 This print was a fail. I wanted to try to print something that was very different from everything I tried before, so I attempted to print my sphere with a slice through it. I added supports in hopes that it would still be able to print the top piece, but I actually had to cancel the print because it was just making a glob of filament in the middle. Although it was a fail, I’m glad I tried something different because I learned from it and now I feel more comfortable in knowing what will, and will not, successfully print. I’m excited for the opportunity to try and print more things from openSCAD after this experiment.

Our project was the customizable jewelry box and my partner was Gabby Dermody.

Our project was a jewelry box where you could customize the size and arrangements of the sections to be more tailored to your jewelry storage needs. There were 4 different arrangements, and some had large sections for necklaces, and smaller ones for rings, and other sections in between. The customizer allowed you to choose between the arrangements we made to allow you to make the jewelry box more useful for the jewelry you have. I really liked how our project turned out because this was something I’ve always been annoyed about because I think its really hard to find a “perfect” jewelry box. I started this class wanting to make stuff that I would actually use because I already have so many extra trinkets in my room, and this is something that will definitely be put to use. I’m glad we chose to do a design like this and I am very happy it was a success. 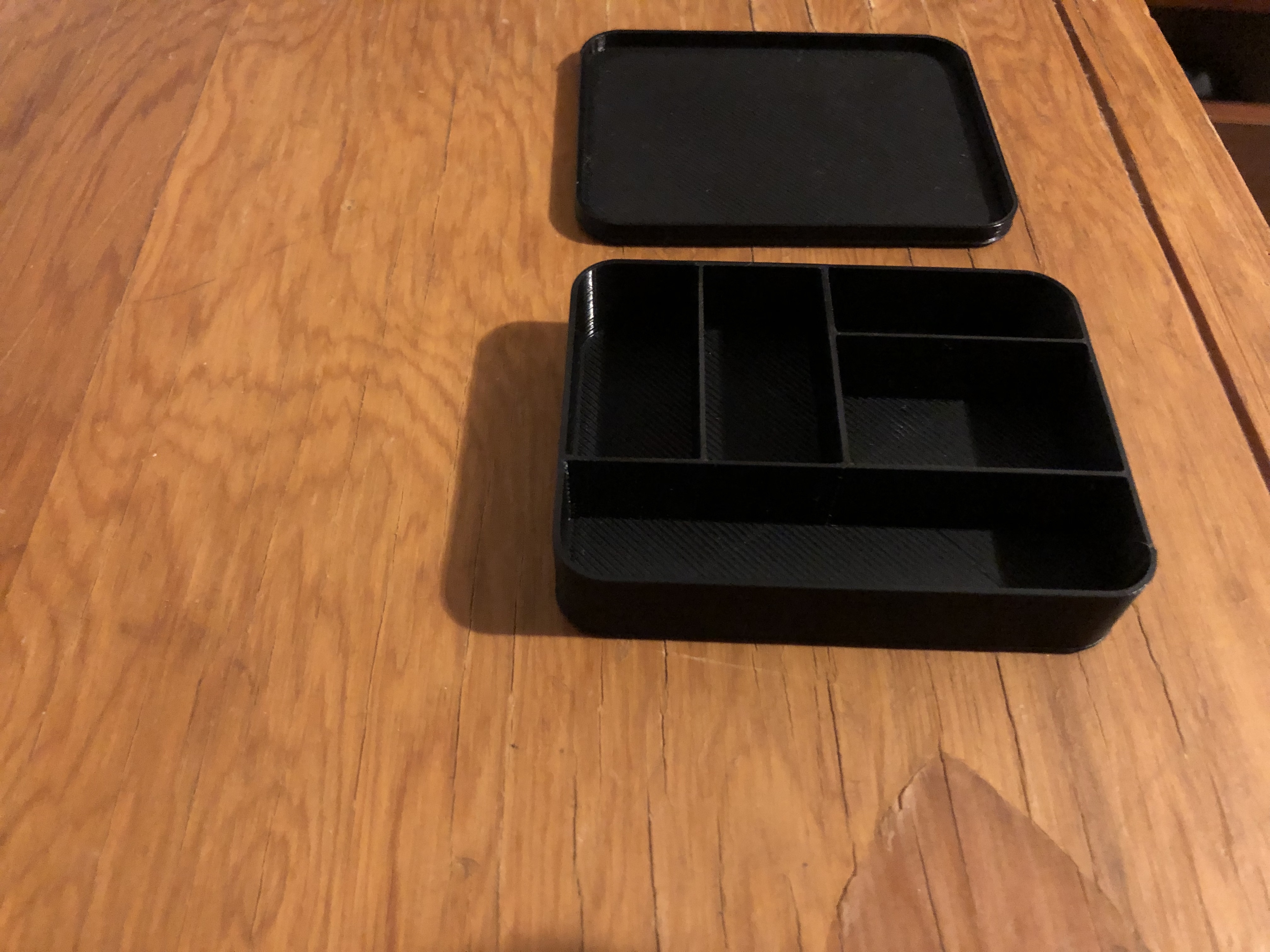 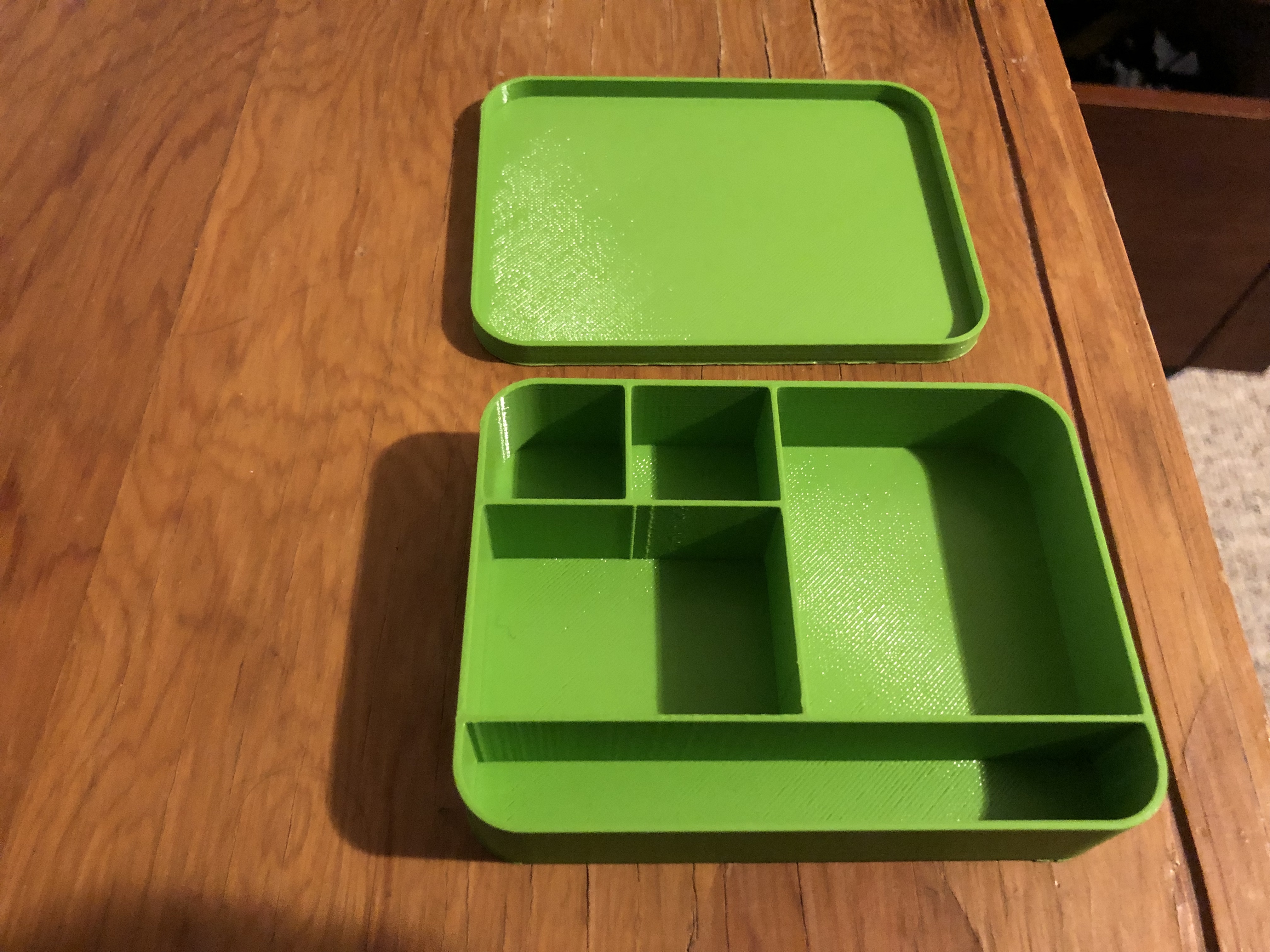 This class has taught me so much more than I originally expected. I started this class with zero knowledge of 3D printing, and now I feel comfortable with printing nearly anything. I originally hated almost all the software we used to create forms, but after working with them for a while I’ve become comfortable with them and also have come to appreciate them. I have been very impressed with my progress throughout this class since I have made a lot of things that I thought would have been out of reach for me. I also made some very functional items that I have already been using and definitely will continue to use. I am really happy with my success throughout this course because before I signed up for it I had never even really thought about 3D printing.

I plan on continuing my 3D printing experience to keep up with my current knowledge and continue learning. Eventually, I would like to make more bowls that I could use for some of my makeup and I would like to make a desk organizer. Unfortunately, I’m not the most creative person so I have a hard time coming up with new ideas to print, so I will definitely be looking to Thingiverse for more ideas in the future. Thingiverse has given me a lot of inspiration already so I would like to continue looking to it for more ideas, but instead of just downloading the STL I would actually like to create it myself to continue challenging myself and to be able to create my own spin on it. I also plan to continue working with openSCAD to make interesting forms that I could print. It took a while for me to learn how to work with it but I’ve grown to appreciate it and I plan to continue to watch youtube videos to learn more techniques and to gain more inspiration.