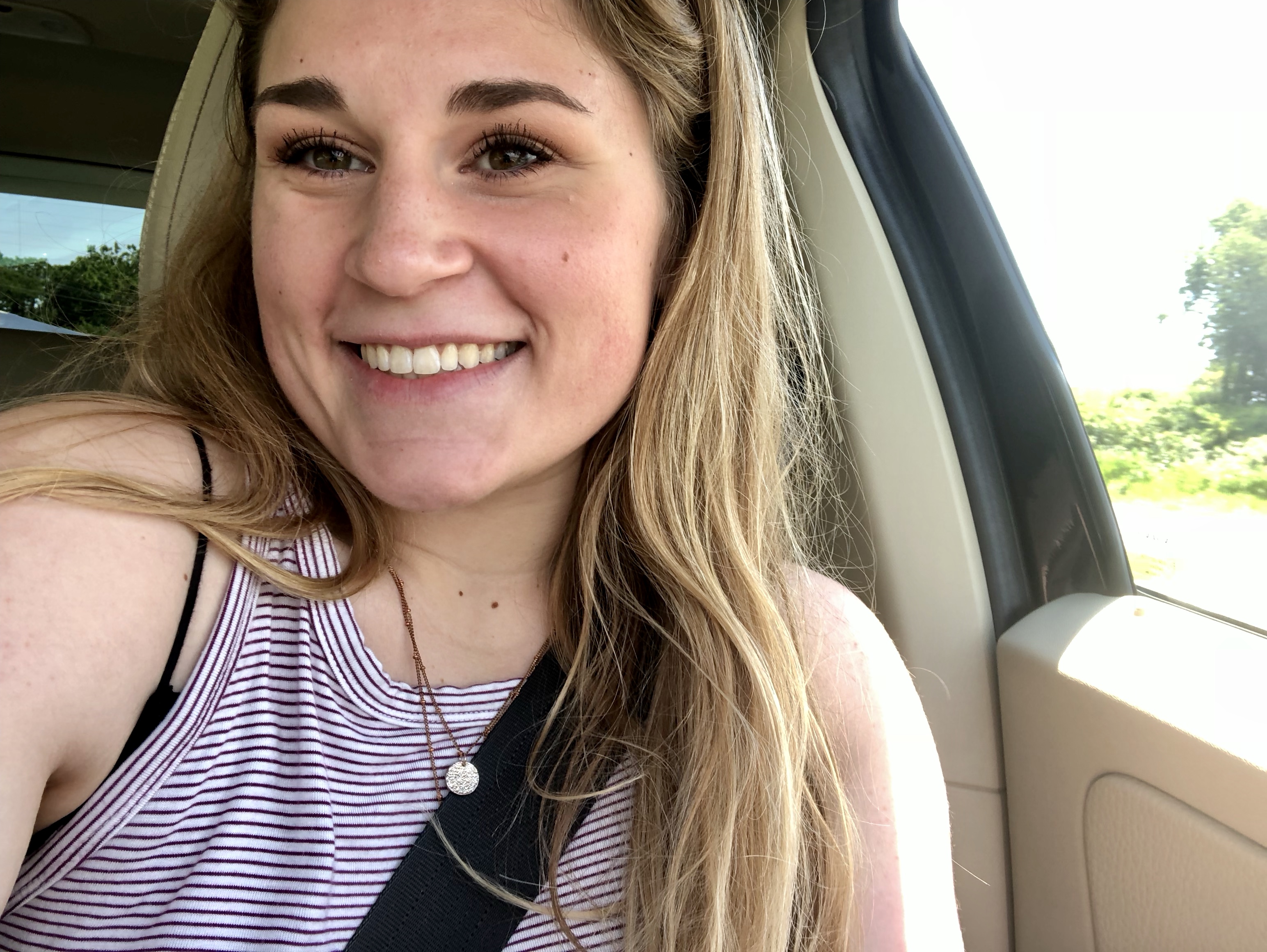 Hello! I’m Ashley Boylan, and I’m from Leesburg, Virginia. I’m currently studying mathematics to become a high school math teacher. I love being around students and watching them realize they can be successful. I have 2 younger siblings – a 14 year old brother and a 17 year old sister. Sometimes they see me around their school since I’m work as a substitute teacher over the breaks.

I have no prior experience in 3D printing, so I’m really excited about taking this class. I’m looking forward to learn about these new technologies and designing things to print. I love seeing how technology evolves over time. Plus, I love creating and designing. My goals for the class are to successfully learn how to 3D print and have fun. 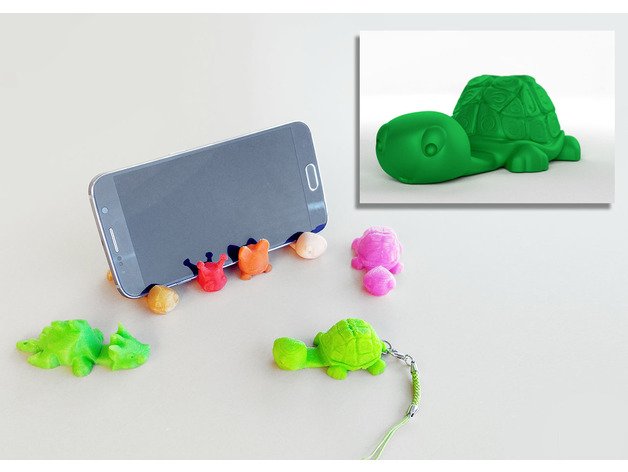 I like things that have a purpose. So, I can easily prop my phone up at night when it’s charging. Also, I could use it to watch videos while having it hold up my phone while I’m sitting at my desk or in bed. Plus, I think turtles are cute. So, I think it’ll be a nice accessory. 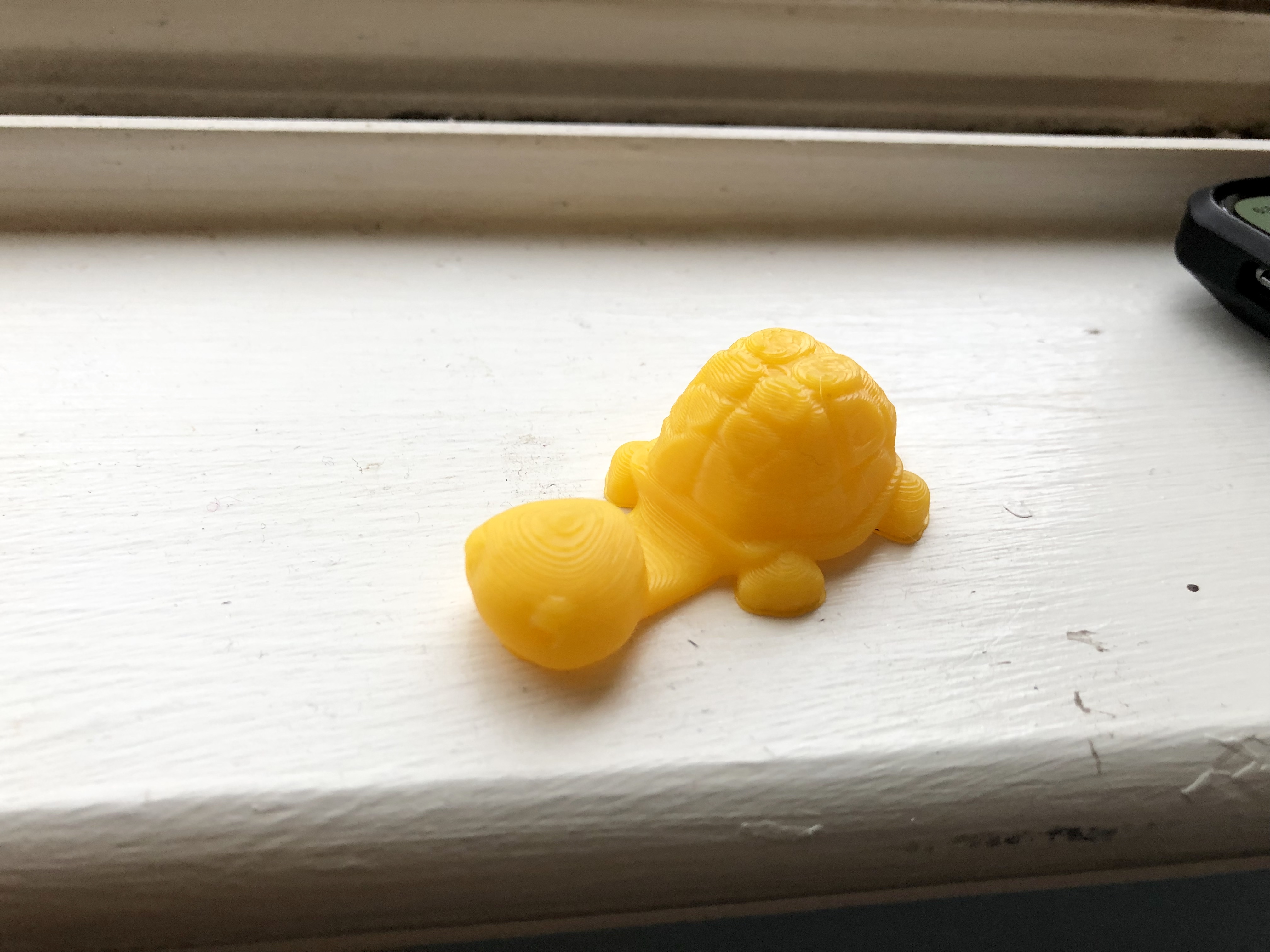 This 3D printed turtle keychain/smartphone stand printed really well. There was no complications when I was watching it print off today. I’m really happy with the way it turned out today. I ended up using it to hold my notecards instead of my intended purpose as a phone holder. I was amazed that even something this small took about an hour to print. 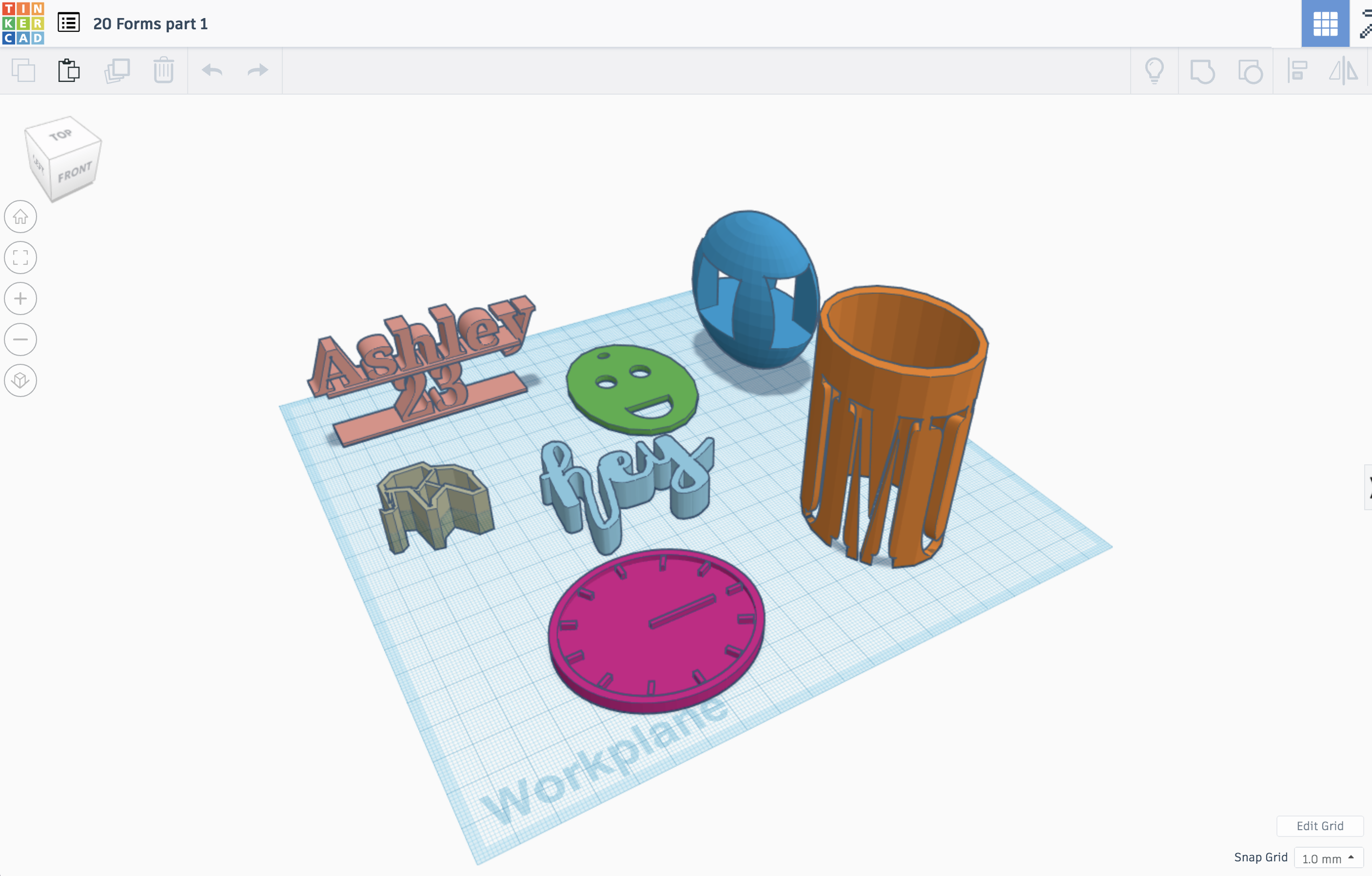 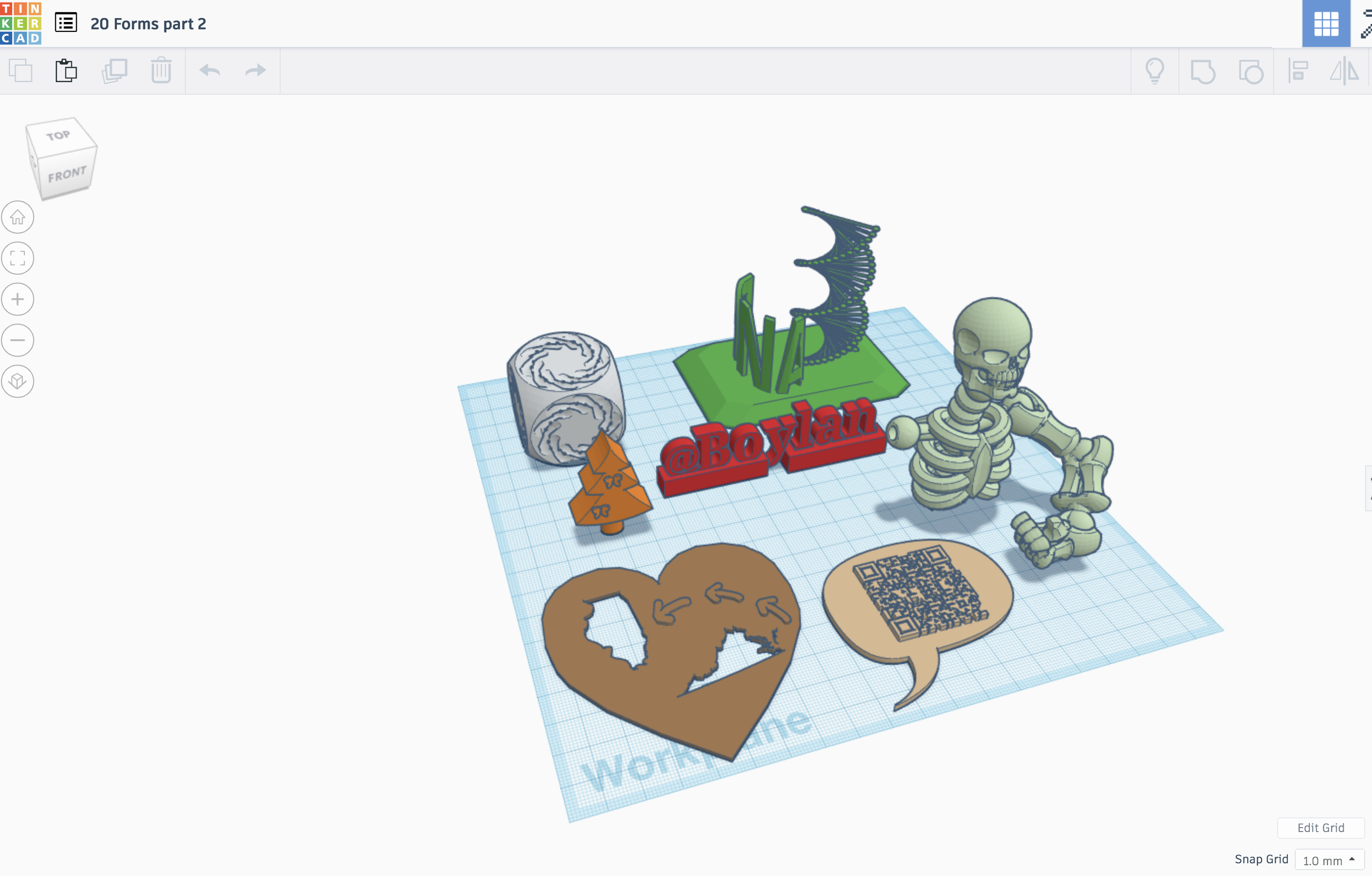 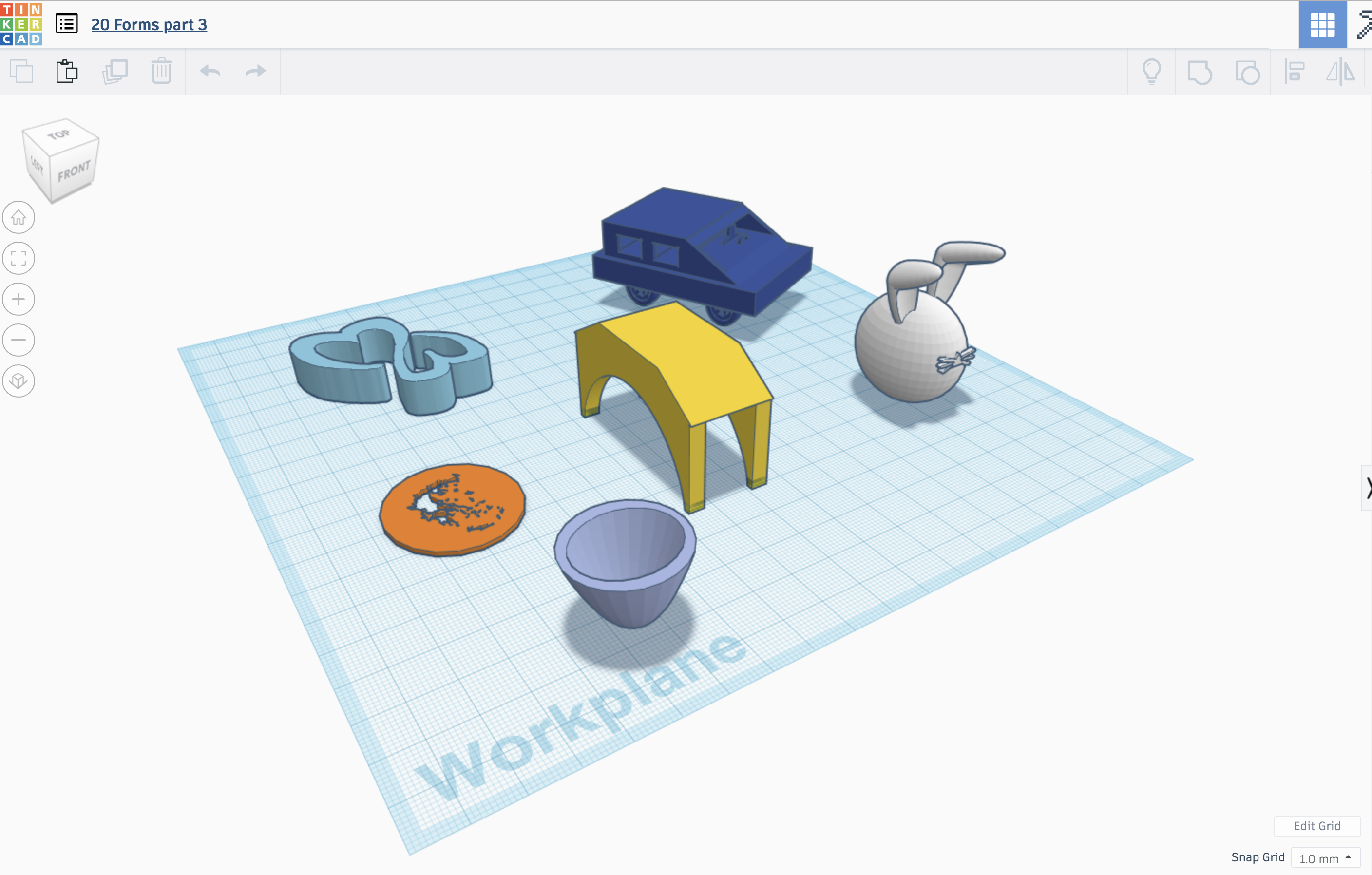 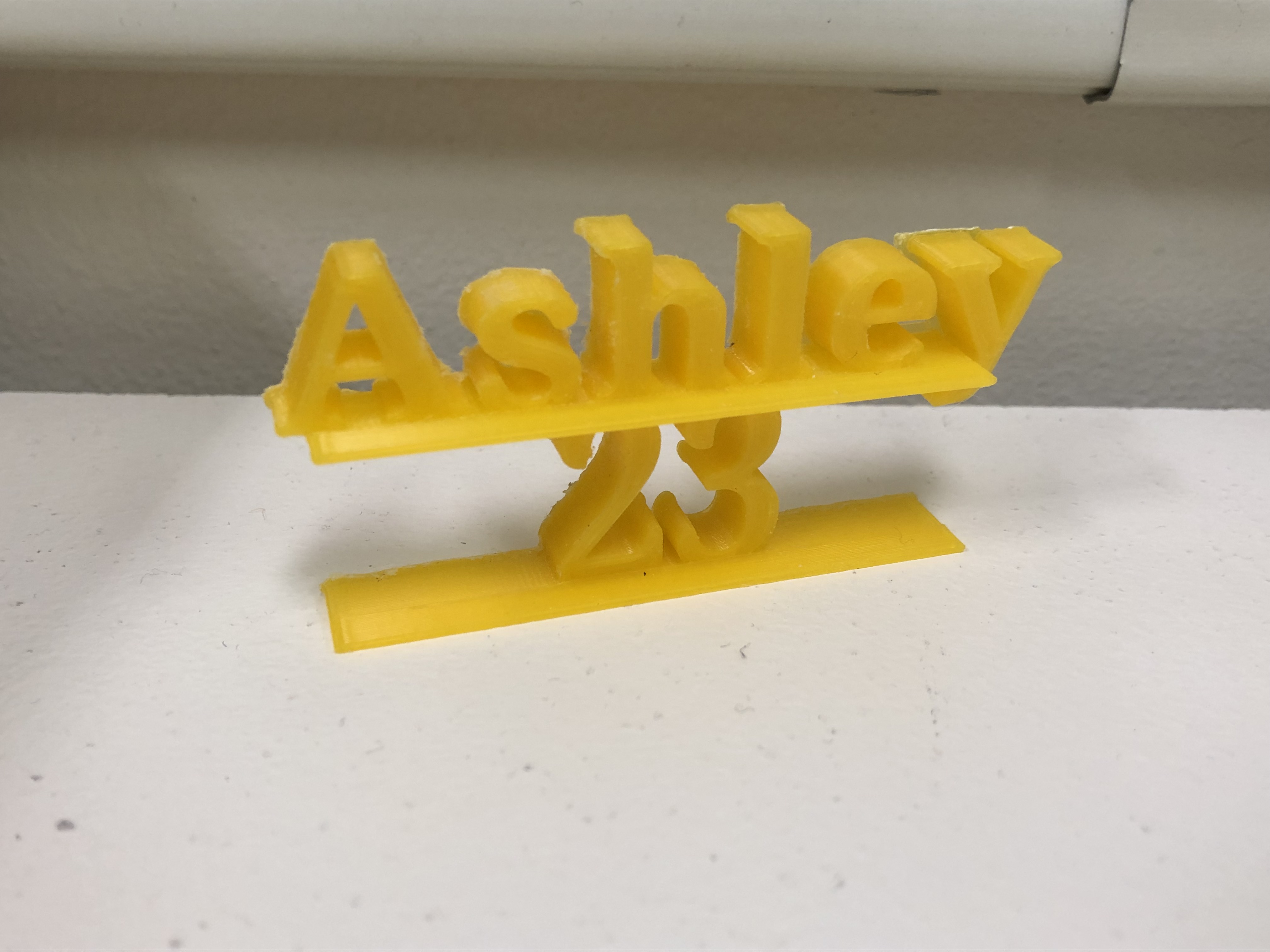 I think my designed Tinkercad print printed well. I used a brim to make sure the letters and numbers built upright. When it was done printing, I had to shave a lot of the brim off through because it was a little difficult to rip off. It was hard to shave the figurine down because I thought I would accidentally break off a letter.

I did have to modify by Tinkercad print before I printed it. In the first screenshot, the image is upright. Before I printed it out, I tilted it at a 90 degree angle so that the back of the old image became the new bottom. I think that was a good change because it would have been really hard to print the letters then without anything to stabilize them. 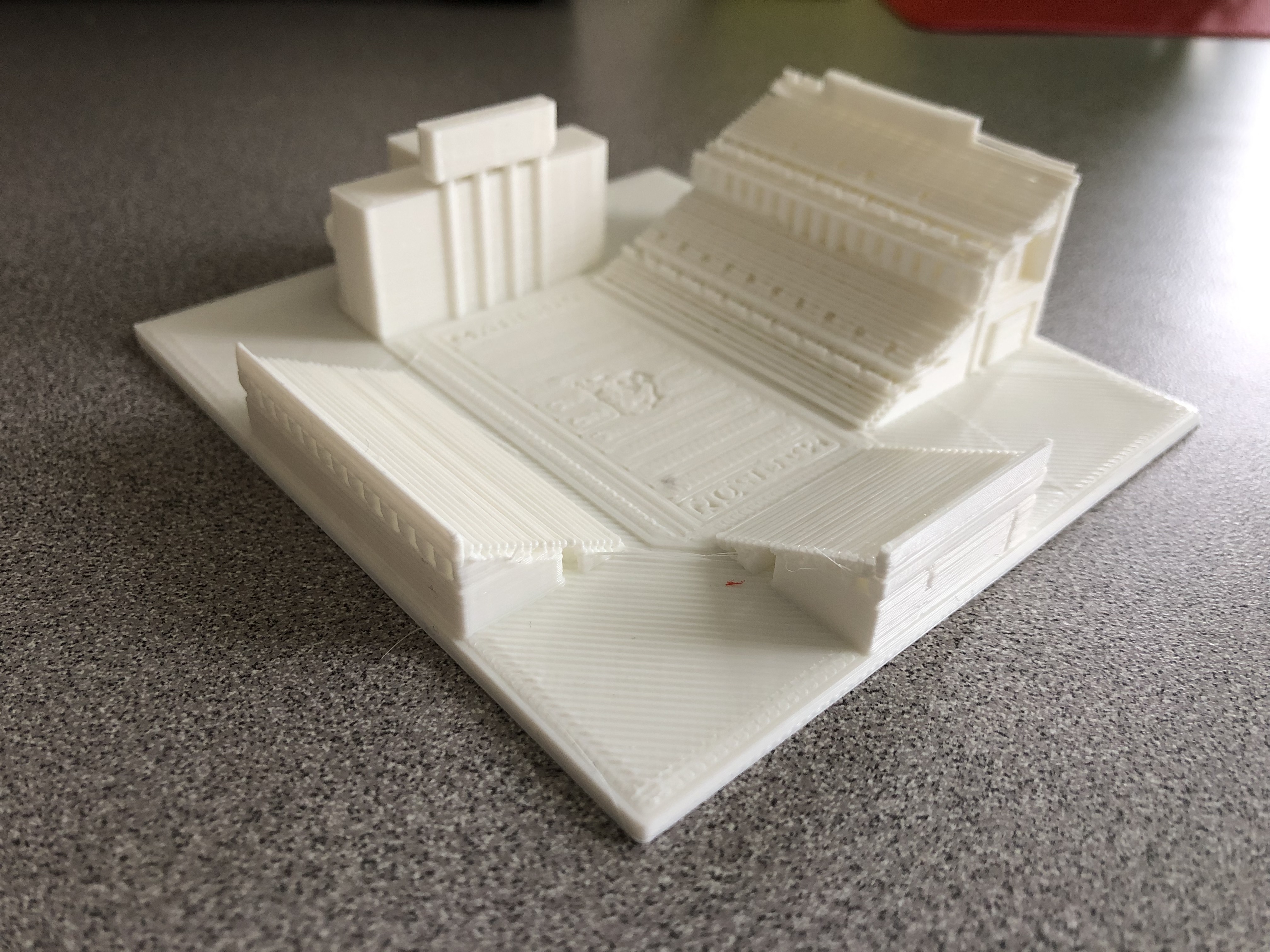 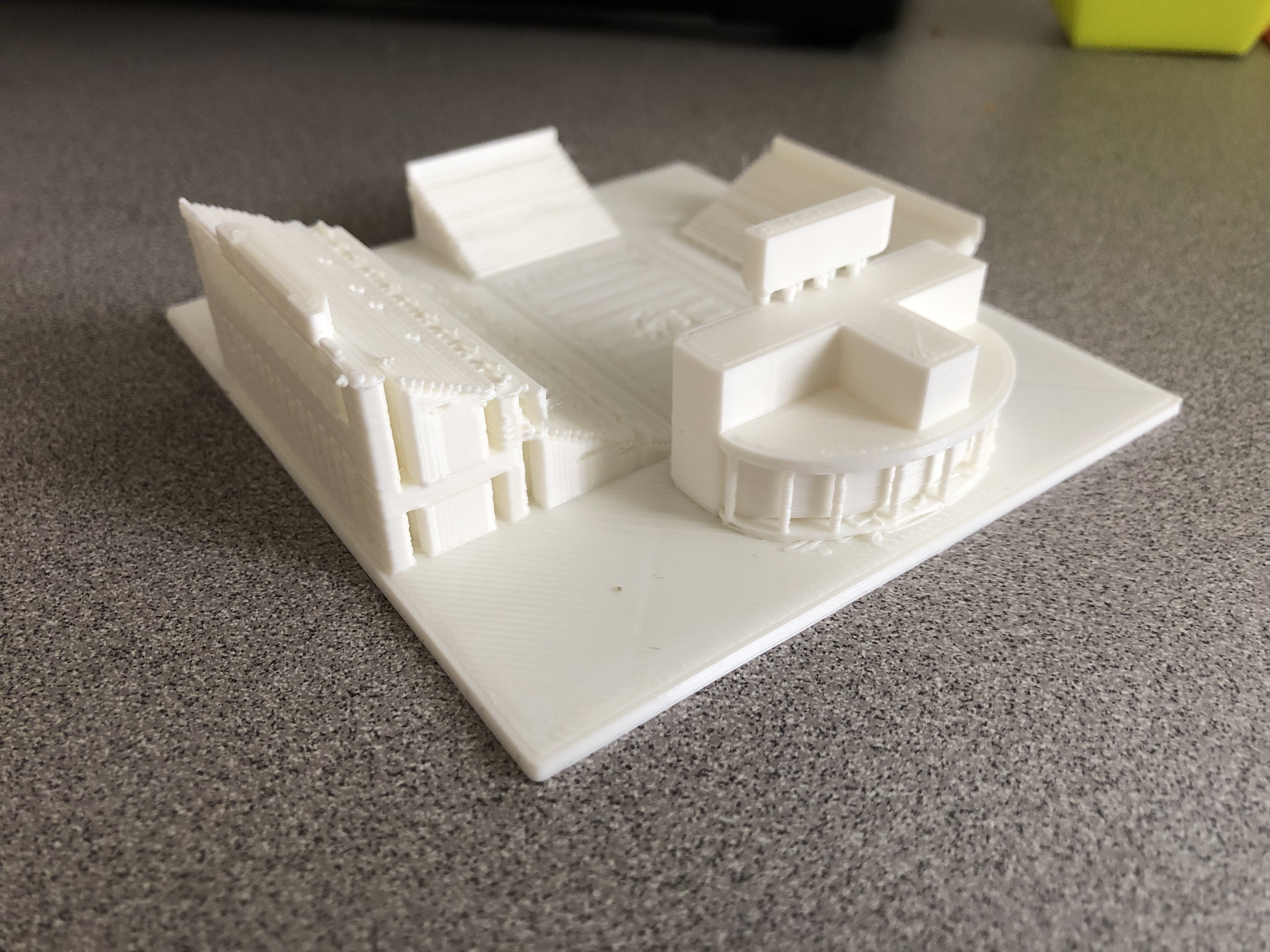 It was a challenge to recreate the stadium. I thought it would be relatively easy to recreate this building on campus. But, I quickly realized I was wrong. It is hard to use Thingiverse to create this model since it was a drag and drop method. So, we took advantage of copy and paste for a couple things – mainly the bleachers. This project required us to go back and print it a couple times because we learned what worked and what did not work. We had the most issues printing columns, the letters “Madison” and the duke dog, the back of the student section, and the bleachers themselves. It was successful in the end because we were able to fix most of the things we found as challenges. The only thing that is still an area of improvement would be getting the support out of the overhang section. I discussed a method to try and overcome it in the Group Project design link labeled “Group Work” below. Overall, it was really cool to use Thingiverse to create something that gave us a challenge because it ended up looking really well. I am very happy with the overall design and print. 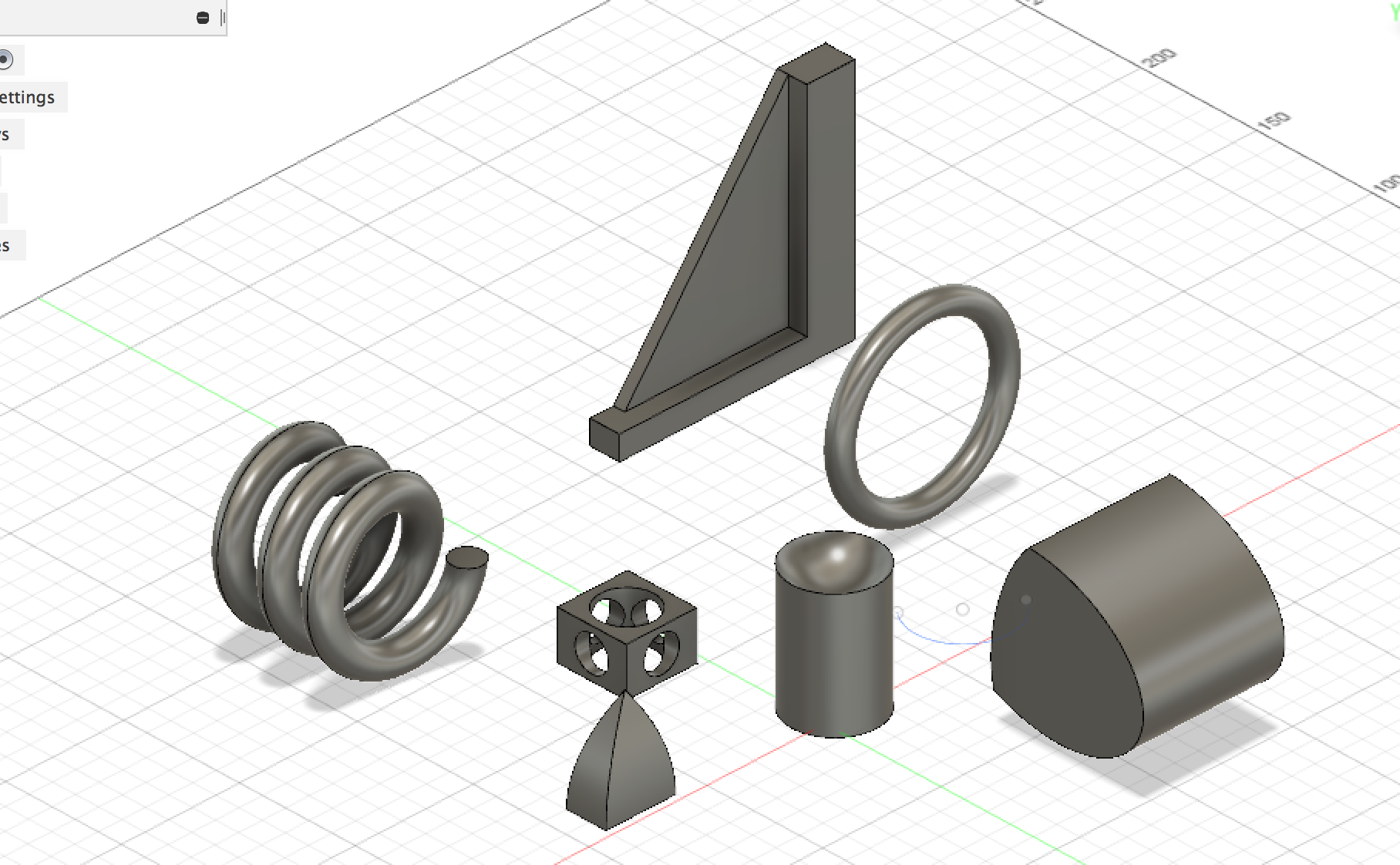 Going back left to right… 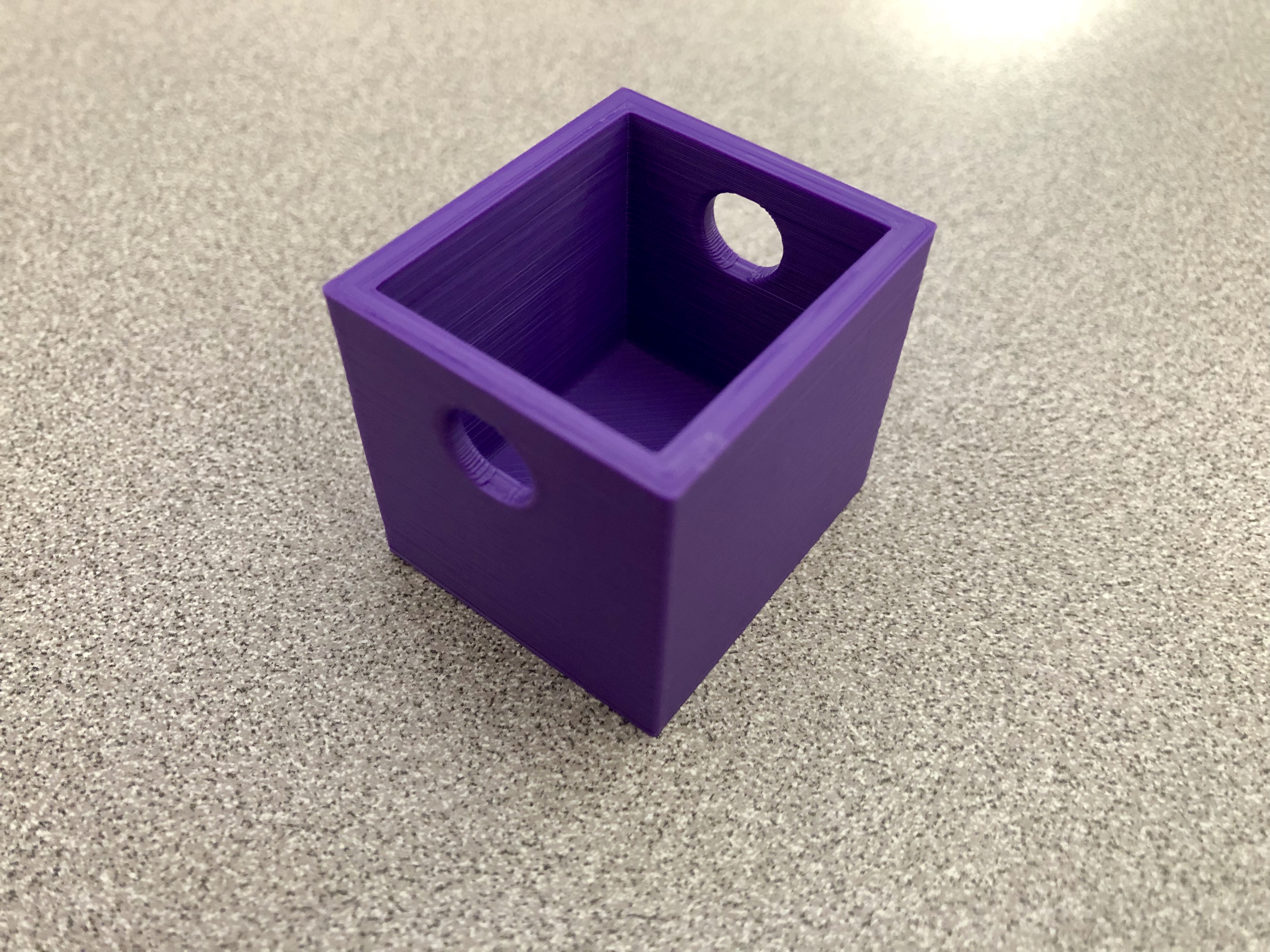 The Fusion 360 print of this box turned out well. It turned out as a success. I forgot to print it with support because I thought that the holes for the box might have collapsed inwards without it. However, it still turned out well. I was a bit frustrating to use Fusion 360 to make something as easy a box because I could do this with ease in Tinkercad in less than 10 mins. But, the design for this took me around 30 minutes. It took me longer to figure out how to create a hole in the box. Plus, I did not realize until after some practice I could make the cylinder on the face of one of the sides of the box rather than trying to learn to rotate the cylinder. 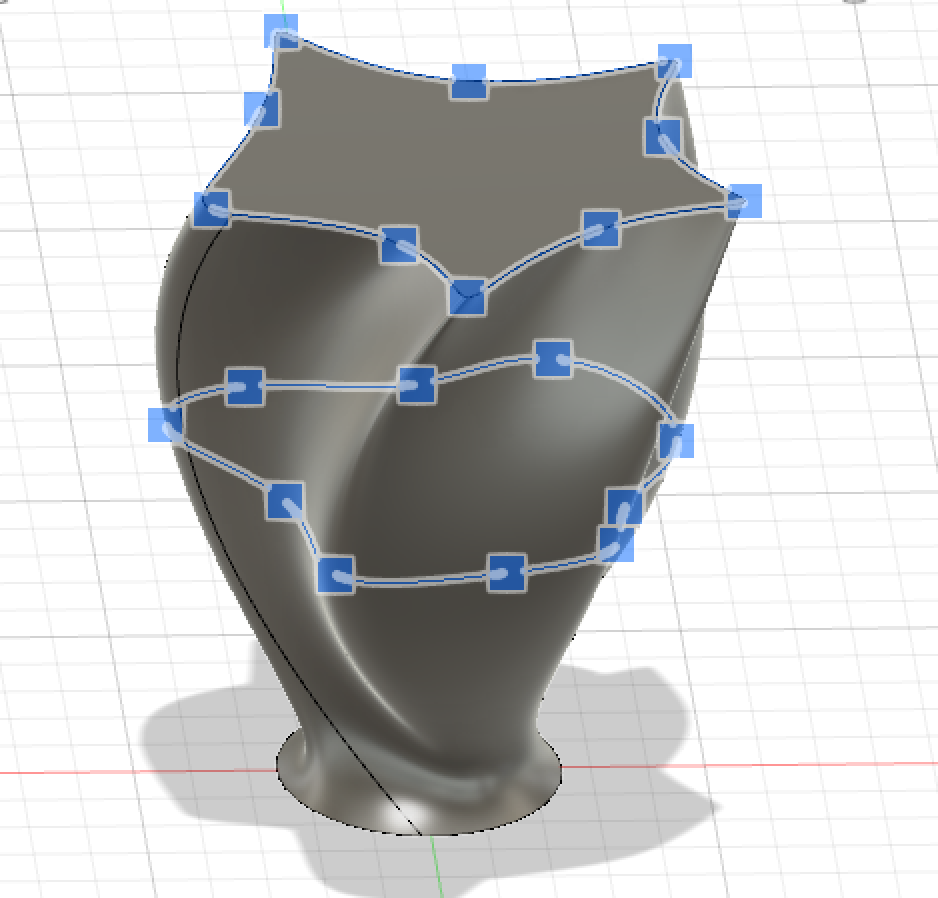 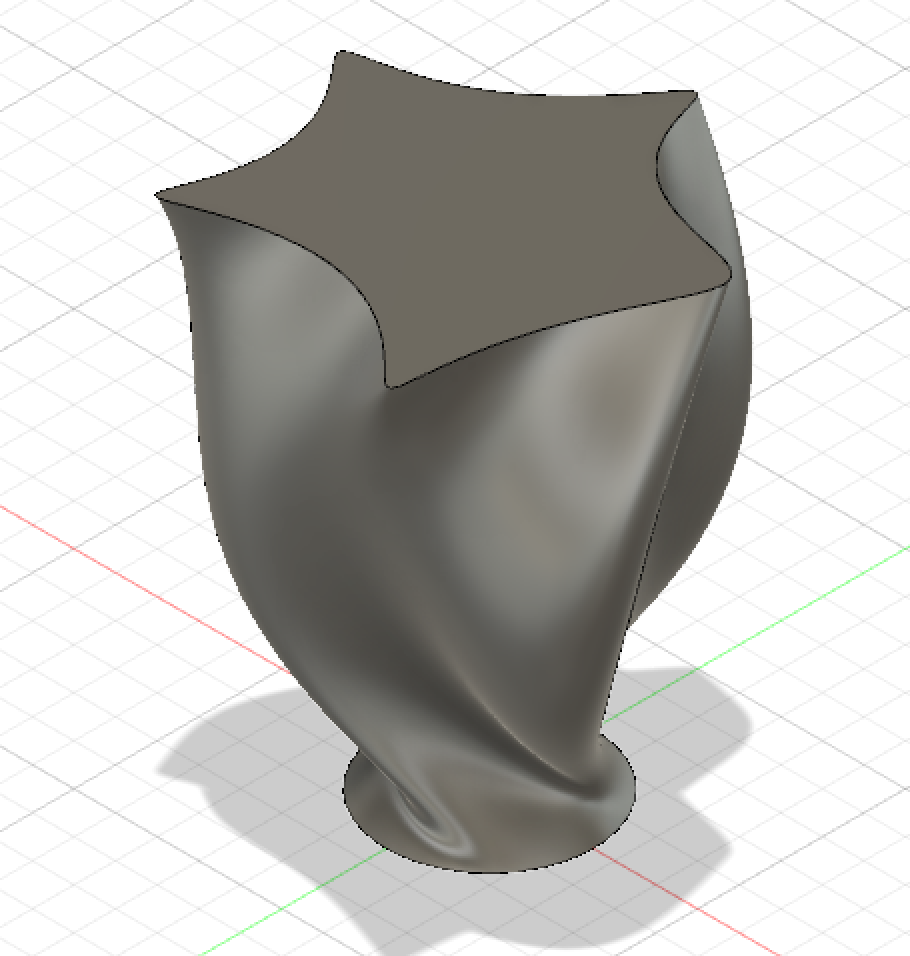 This above screenshots are the design for the large vase. Since I created this model on Thursday, Fusion 360 wouldn’t really allow me to get rid of my loft without getting rid of the whole image. So, these are the best screenshots of the model. The large vase had two offset planes, which then had splines created on them. After the splines were made, I attached all three layers through a loft. Then, I twisted the guide rail that the model suggested. This goes beyond the basics of the video because I was able to create two offsets planes and attach them successfully using a loft. 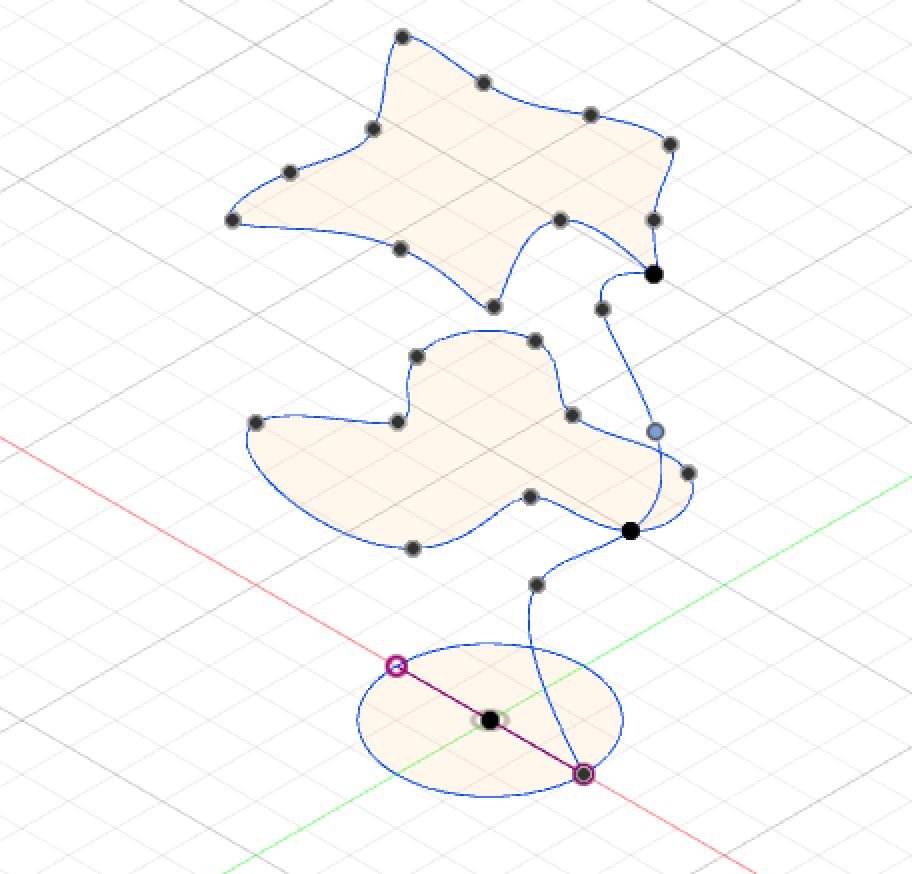 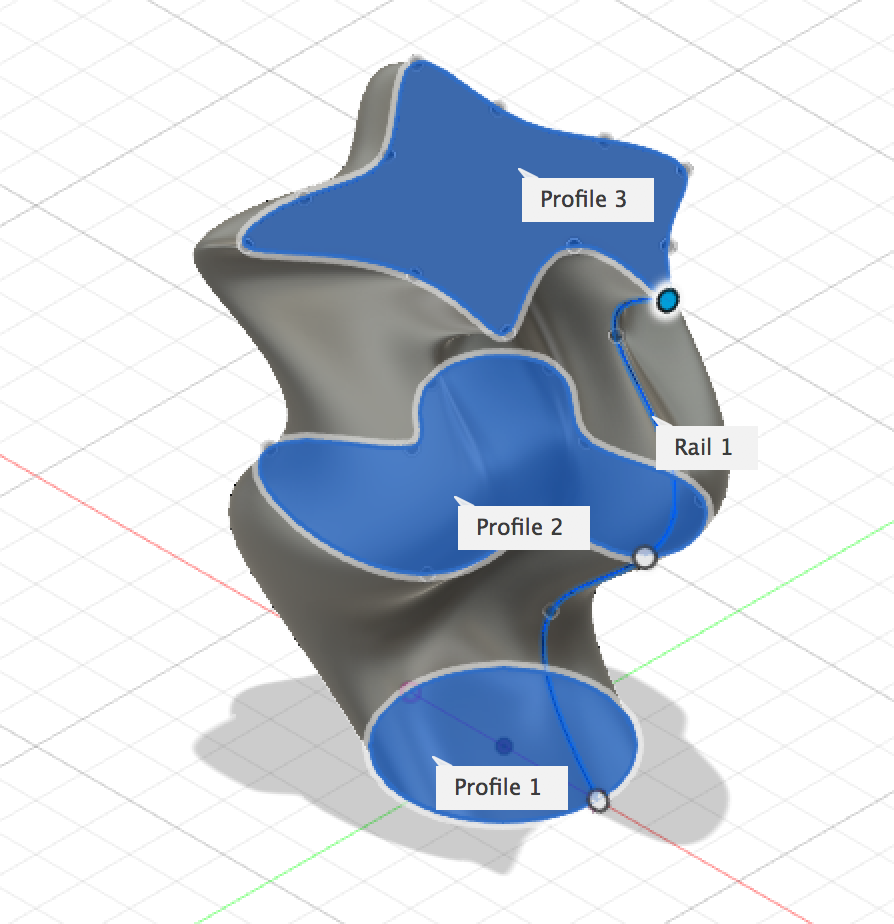 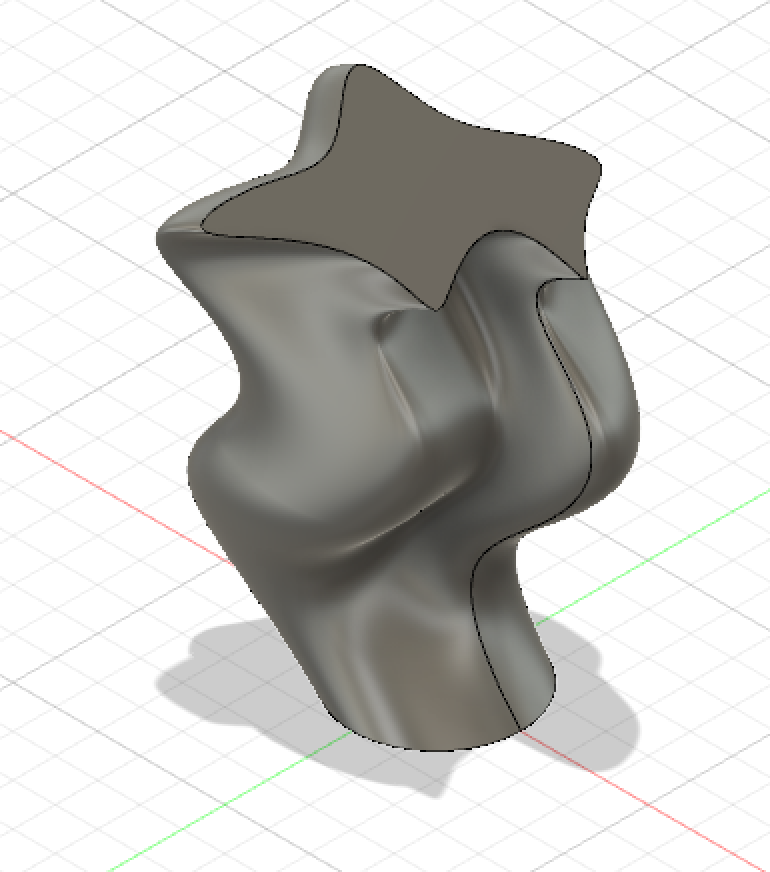 The above screenshots are the design process for the smaller vase. The design process is very similar to the large vase. I still created two offset planes. Then, created a circle on the bottom and two splines on each of the offset planes. To take this model one step further, I added my own guide rail this time. This goes beyond the basic design in the video because this posed more of a challenge. It took a couple tries to successfully connect the guide rail to the 2D shapes since they had to be successfully aligned. I was not able to twist the guide rail on this model because of the sharp edge. 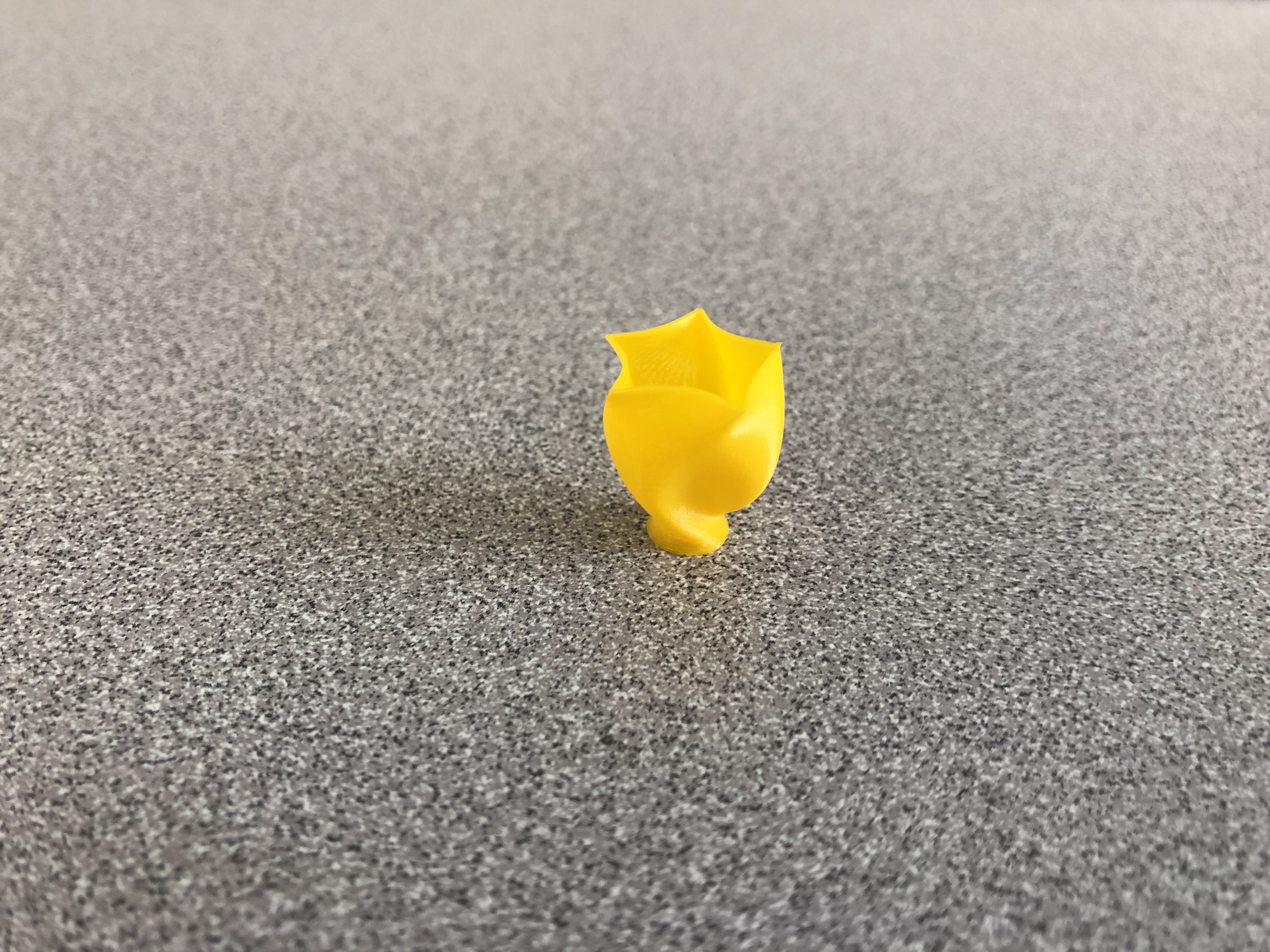 Above is the small vase demo for the large vase.

I think the demo printed successfully, so I’m going to print the larger version for the final large vase. The sides of the small print were not flimsy. 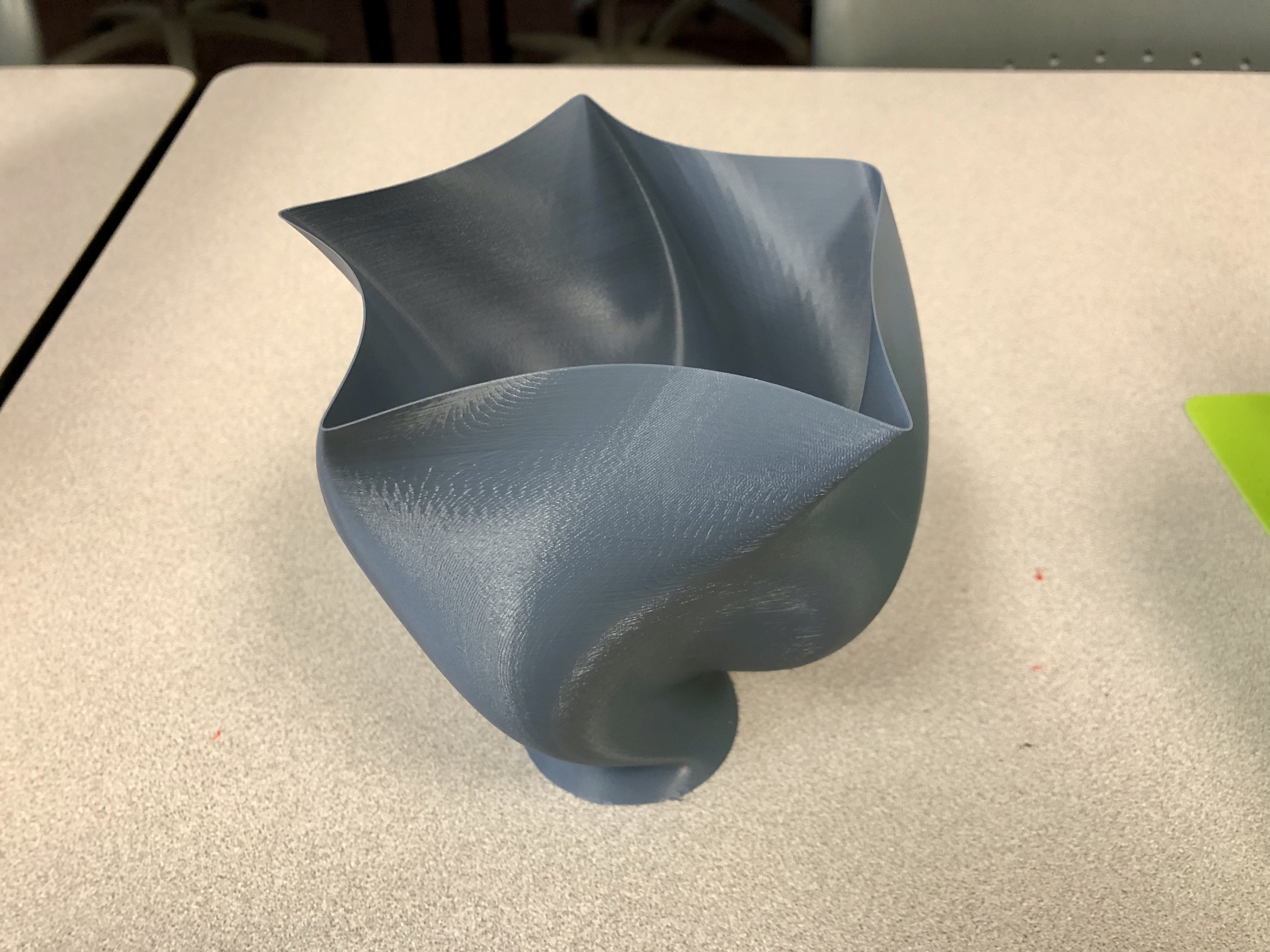 Above is the a picture of the final print for the large vase.

The large version of the vase printed really well. The vase is able to sit upright without falling over. The filament does not show through any of the parts. I was surprised how thin the sides of the vase are. I definitely thought it would be able to hold stuff inside. After printing it I don’t think it can now. 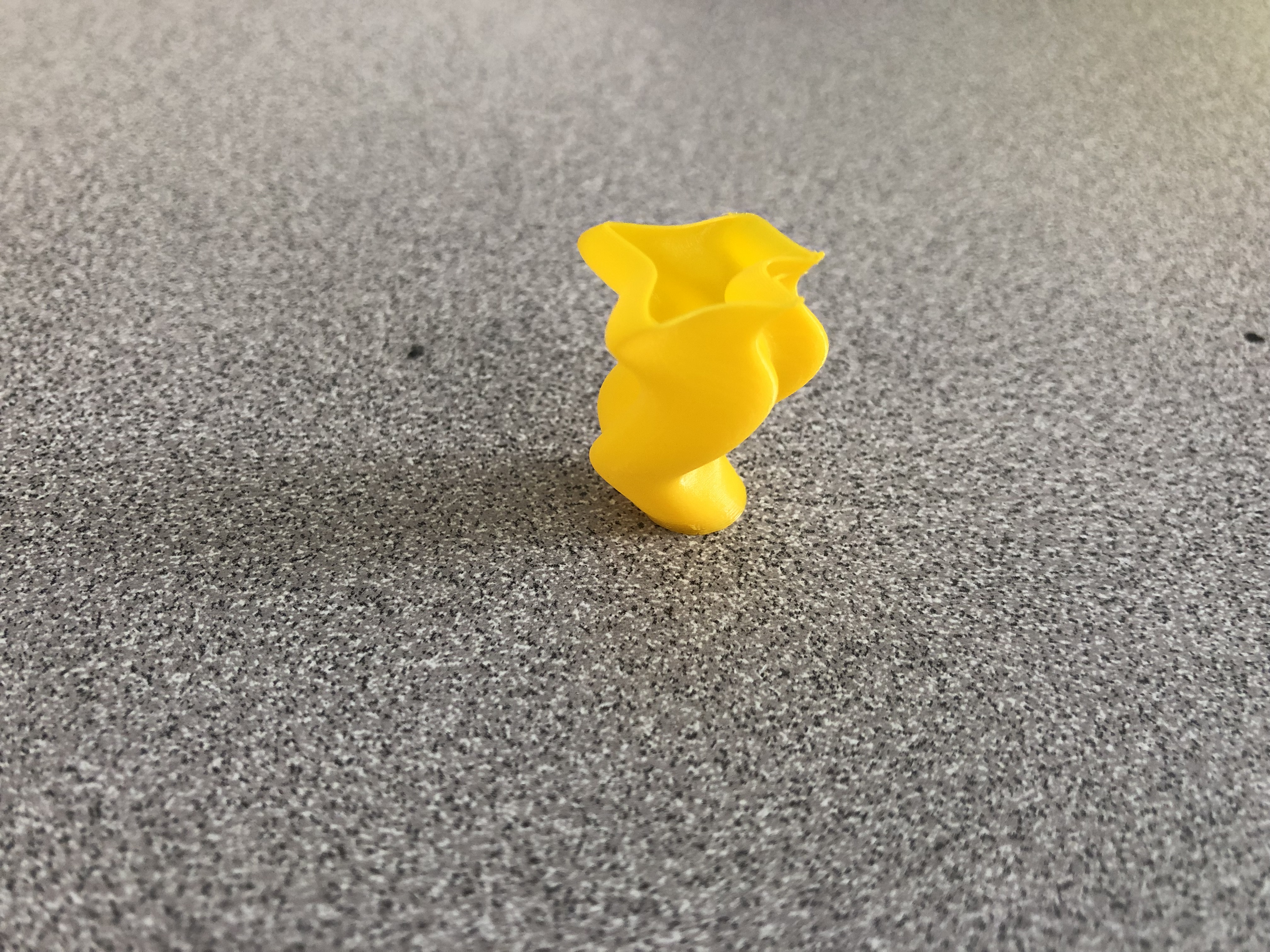 This is the small vase I printed different than the one above.

I think this printed really well. I’m surprised at how well it is able to stand on its own since it is very curved at the base. This did not take long to print at all on the machine. It took a little less than 20 minutes to print. 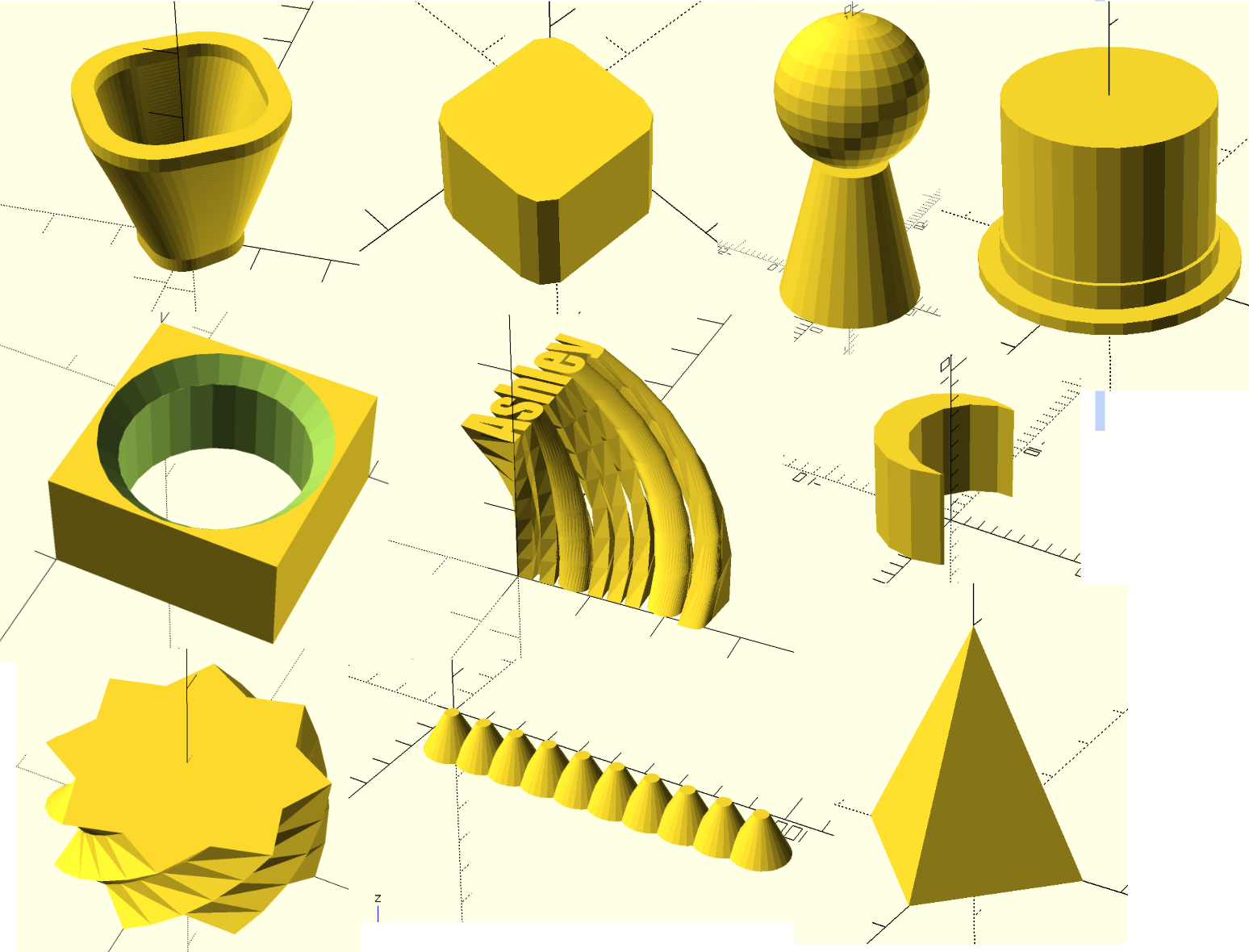 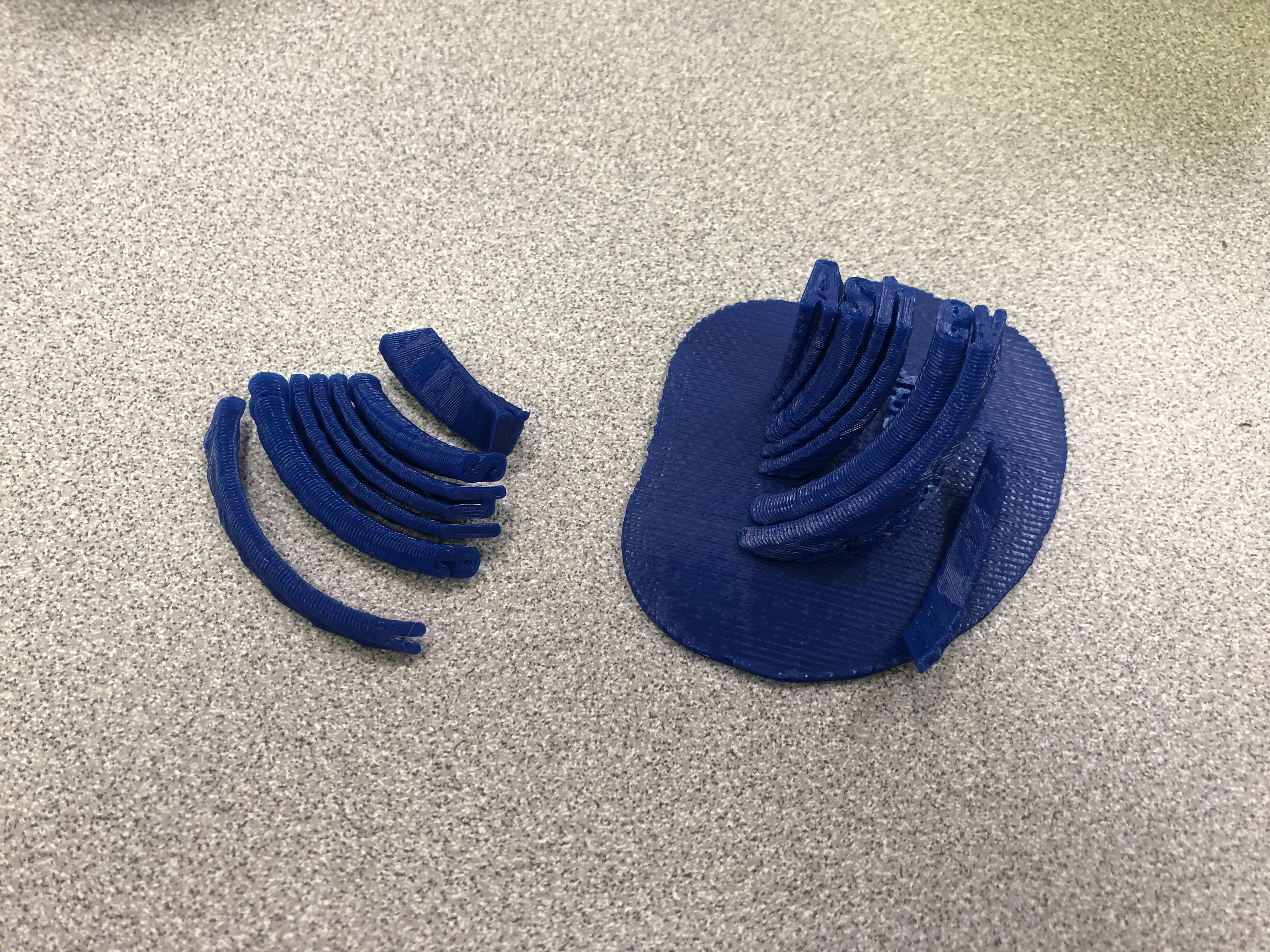 I chose to print the model of my name. This design was hard to print because of the twist. It gave a slight overhang to the model. So, the first two trials were a failure. When I printed it for the first time, the model only had a skirt tracing the design. I did not realize the letters did not stick together. Therefore, when it was time to take the model off the print, the letters came off individually. So, I tried to print it again using a raft to secure the letters. When I printed it the second time with the raft, I thought there would be too much of an overhang, so I used support. After the second model printed, the letters were not secure but I could not successfully take out the support. Two of the letters were ripped off and the support would not fully come off the raft. I printed it for the third time and the result is the picture below. 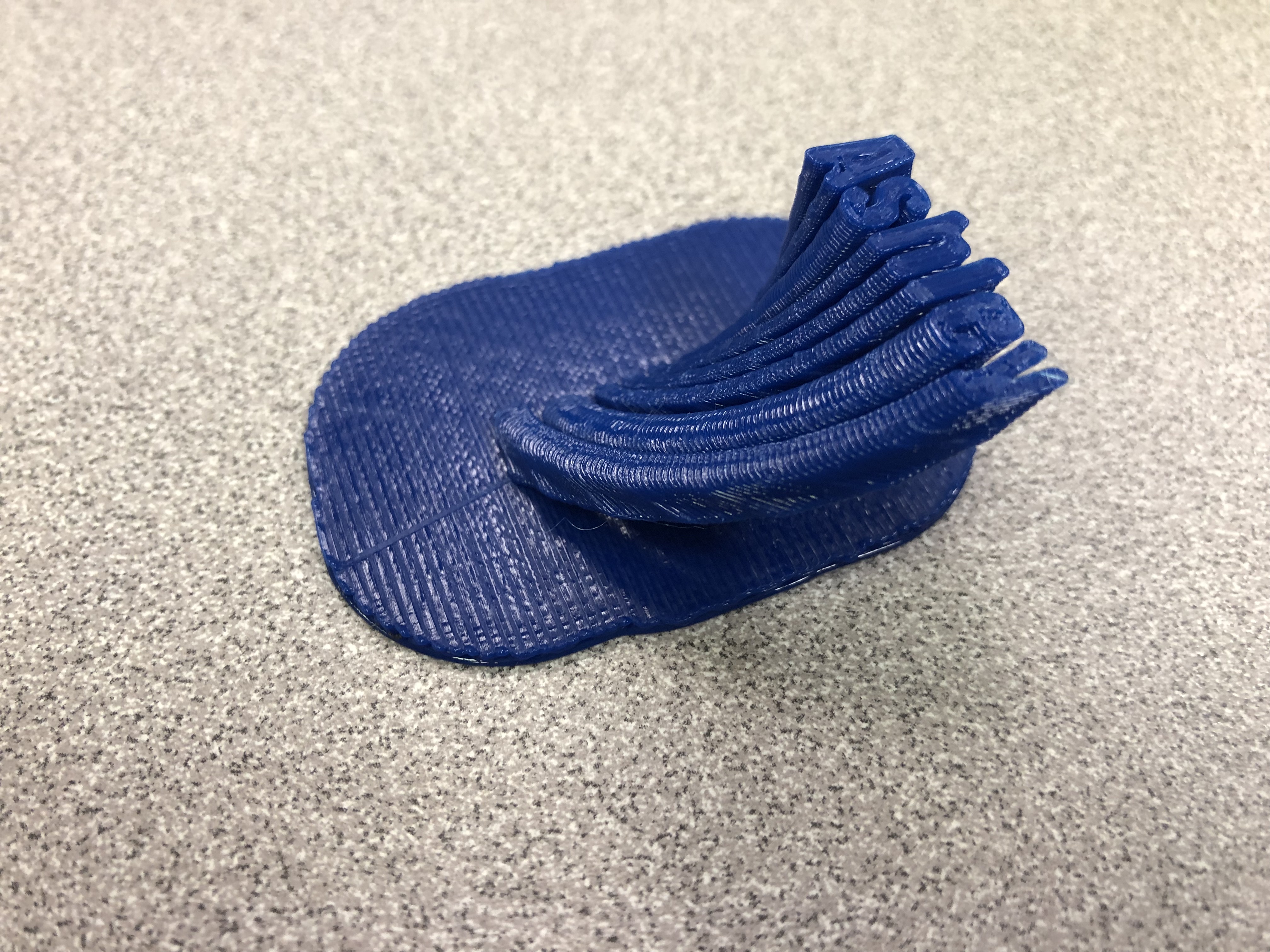 The third trial was success. The brim helped the letters successfully twist. I was able to get the overhang this time. I just made my image larger and did not use a support this time. This was a challenge for me because of the difficulty it was to print. After a couple trial and errors, it eventually worked. 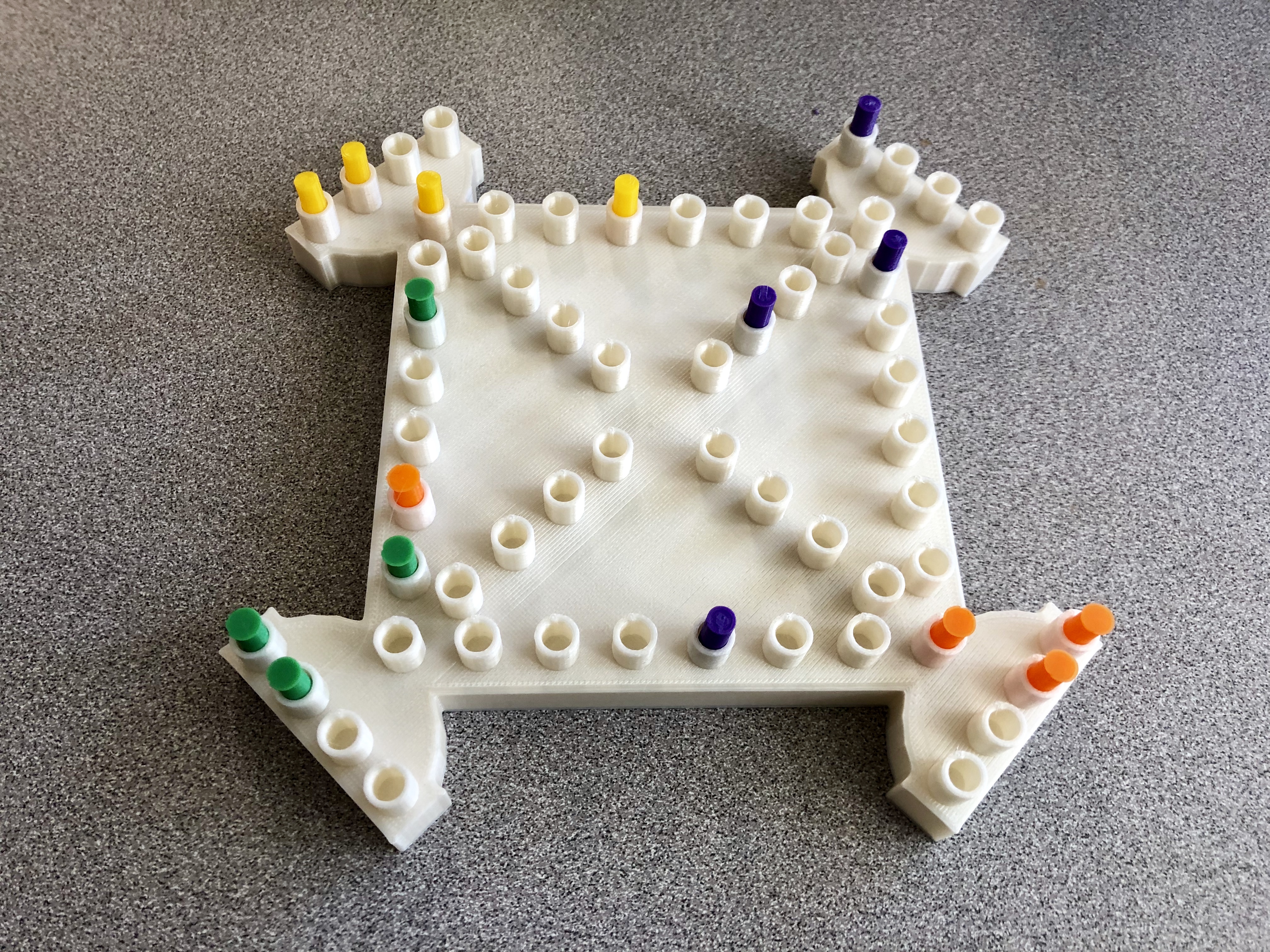 Austin Lam and I created the board game Trouble pictured above.

Link to Trouble Board Game with Pieces

The game board is designed to where the players get to choose the size of the game board, size of the spots, the number of pieces, and the number of spots per corner. Originally, we wanted to use adjust the game board based off the number of players. For example, if there were 3 players, then the board would be shaped like a triangle. If there were 4 players, then it would be shaped like a square. However, the mathematical principles behind each figure were not the same for each shape. In the end, we decided to allow the players to modify a 4 player board. I think we still did a great job designing the board, and it turned out as a success. It took a lot of trial and error because there were a few complications with the board printing successfully. The main problem was getting the height of the spots to print. It was solved through making the game board large. It was personally hard to me because I don’t have a lot of experience coding. So, I was really glad to have Austin as a partner since he’s a computer science major.

This is one of my favorite classes I’ve ever taken at JMU. It challenged me to explore and create different 3D objects that I never imagined myself doing. My favorite 3D printed model I made this semester was the Bridgeforth Stadium with Austin. It provided a challenge because we used a drag and drop method to make everything. And, we were able to make it look almost like the real stadium. I thought it was really interesting to learn different ways to make 3D printed designs. My favorite was using Tinkercad because it was the easiest for me to learn as a beginner. I think using OpenSCAD would have been nicer to use if the class was a regular 3 credit class. I would have felt more comfortable using OpenSCAD then because I would have more time to explore with the program.

At times, I did find the course challenge but only because of how fast paced things moved along. Even though there was a lot of work for the course to meet the deadlines, I really enjoyed spending time making models for class. Since it was unlike anything I’ve ever done before, I enjoyed spending my time working on projects for the class.

For the future, I could see myself wanting to 3D print certain functions on an x,y,z plane for my future high school students. I think my future calculus students would then have a better understanding on what certain graphs look like if they are able to see them rather than trying to interpret the image from a sketch or trying to imagine the function in their heads. Additionally, I would like to add to Bridgeforth Stadium to get the wrap around student section of the bleachers to have them connect. We were not able to do that for the original model because of time. But, I would eventually like to go back and add that feature to make it more realistic.