Ashley Boylan and Austin Lam are planning to make a model of Bridgeforth Stadium at James Madison University. We thought this would be a fun idea for our project because we love the football games here at school. Game days are a great way to spend time with your friends while watching the winners of the FCS National Champions of 2017. So, we wanted to try to replicate a small model of the stadium.

From the start of this project, we learned how to import and make designs in Tinkercad. We want to use those skills to help us successfully design a figurine of the stadium.

We hope to learn how to successfully create the columns to hold the scoreboard and to hold the weight of the upper-section of the home side stands. We will learn how to do this by watching Youtube videos or exploring the internet for tips and tricks. However, we think a lot of learning will be done through seeing how the model prints in order to learn what we have to fix. So, a lot of the project will be learned through trial and error. 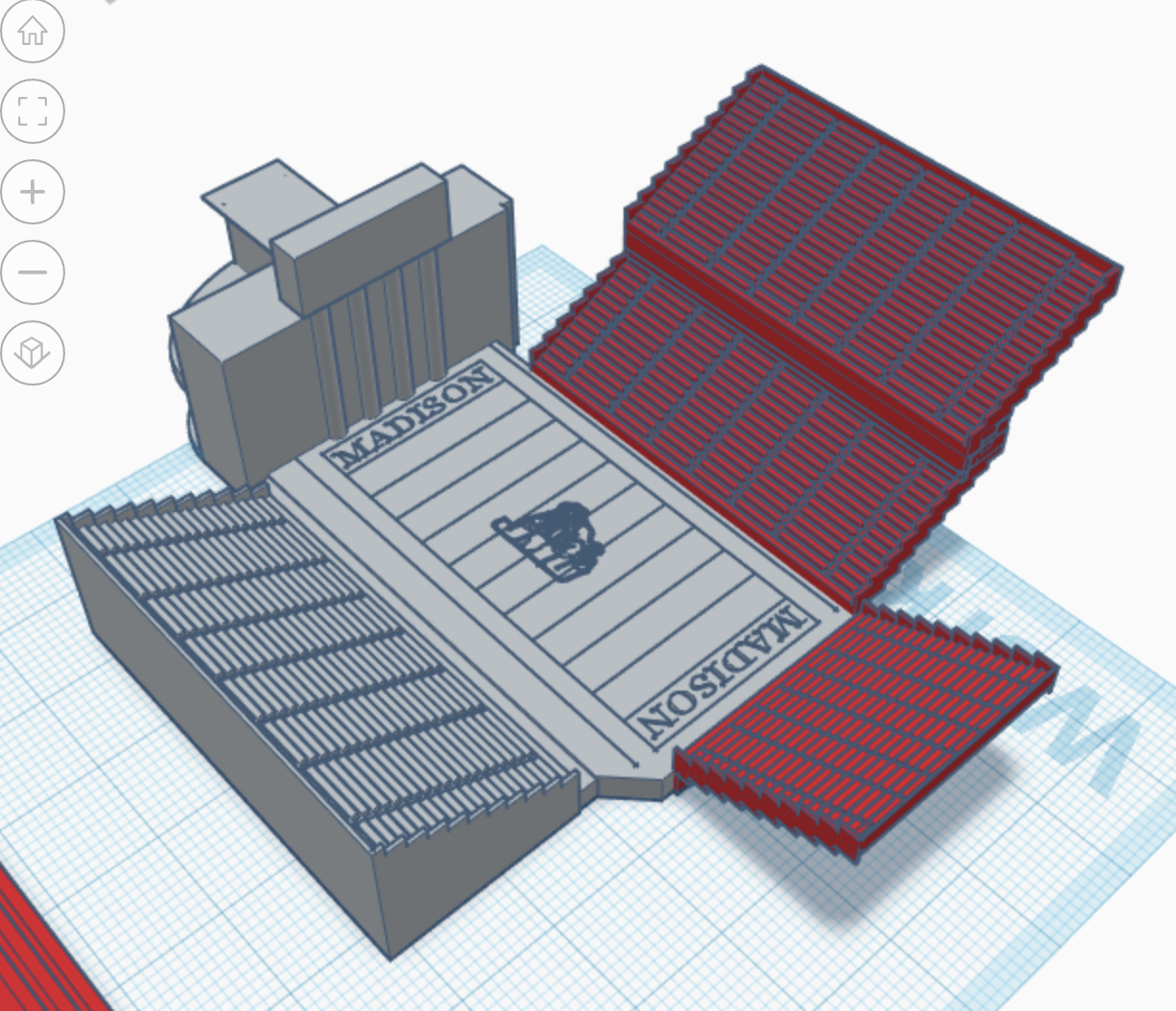 Above is the Tinkercad model of the first draft.

The two pictures above are the front and back view of the stadium.

Overall, it’s a nice first draft to see what went well and what needs improved. It succeeded on printing on the first draft without any mistakes on the printer’s end and with it looking like an accurate representation of the stadium.

We learned that it’s hard to create overhangs from our original model especially considering its small size. Originally, we had overhangs in a couple places. The support underneath definitely needs to be thicker. When trying to remove some of the generated support, it almost broke part of the stands. So we need to create a way to better support the overhang.

There are a couple things that need changing while we move forward with our project. Like mentioned above, we need to fix the issues with the overhangs for the stadium. We don’t want our model to snap off when trying to remove the generated support. Second, we need to fix the columns in the front of the stadium entrance. Again, that was an issue with the generated support. It filled in the small areas in front of the columns with it, so it was nearly impossible to break that off without the overhang snapping off with it. Third, we need to make the overall model a little bigger so the “Madison” and JMU Duke Dog prints a little more legibly. Lastly, we need to fix the home side seating to have it’s back. In the Tinkercad design, we had a solid back to the home side seating, but for some reason it looks like columns were printed instead. So, we think that might just be because there’s empty space underneath the bleachers. 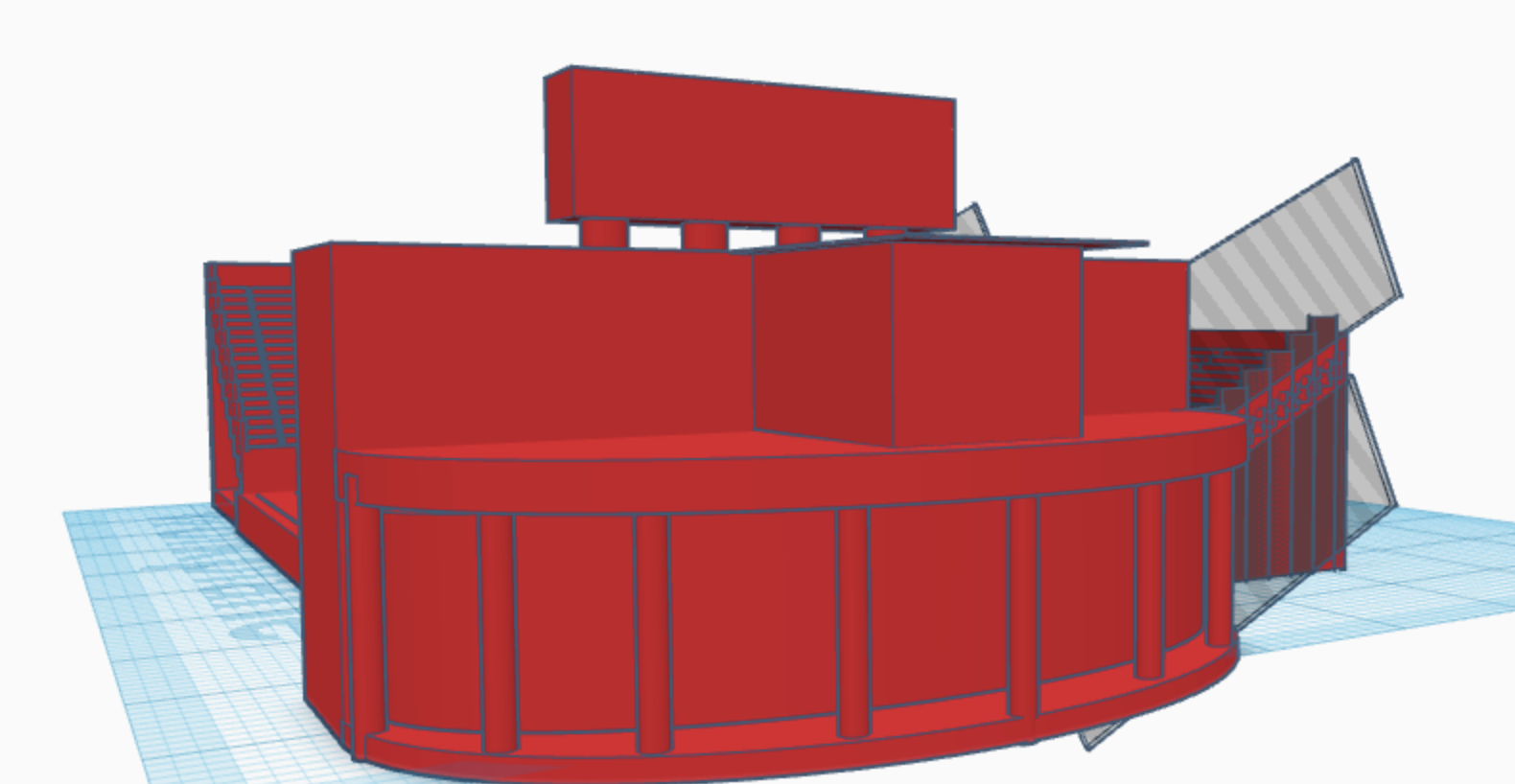 One thing we started to change was the entrance. The columns were stuck inside the generated support. So, we decided to add in an extra half circle, so the columns would not need as much extra space underneath to generate support. Hopefully, it will make the support easier to remove. We don’t have a before picture, but it did not have the middle layer sandwiched in-between the top and bottom half circles. The picture above, is our new model. 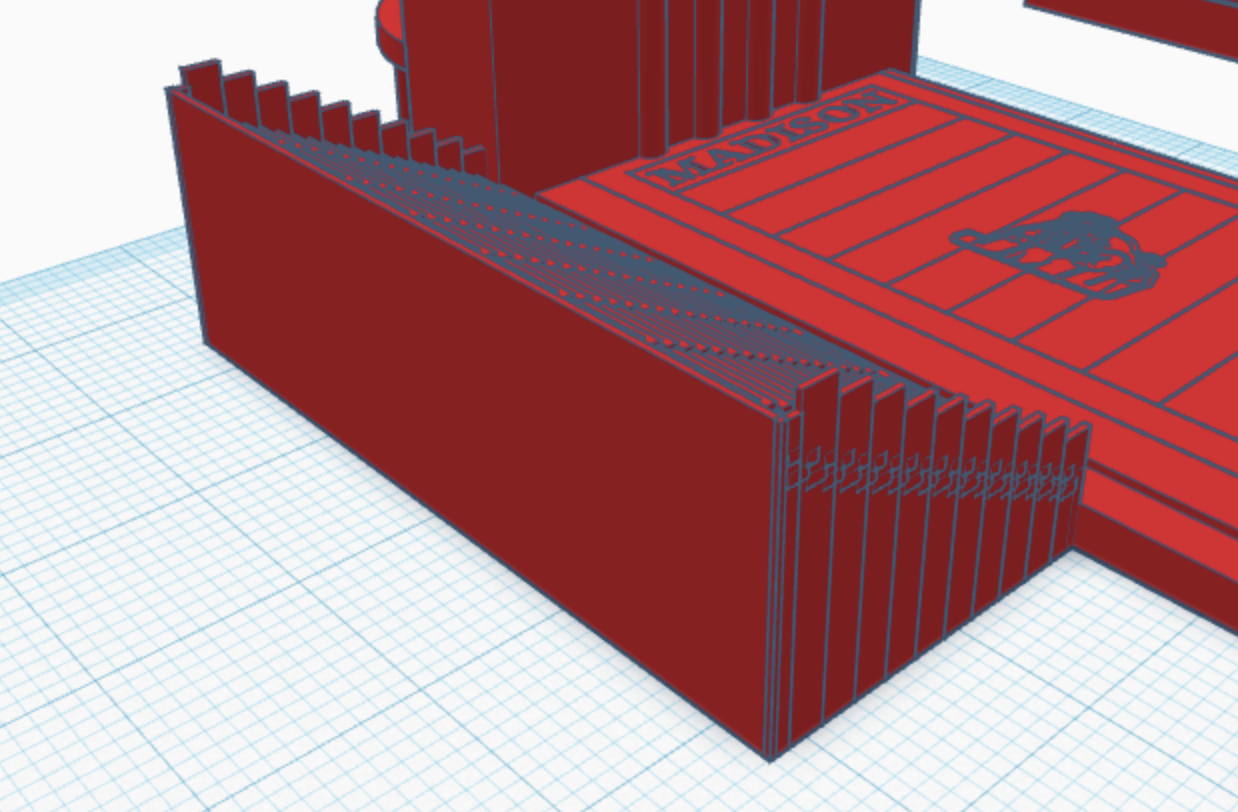 This picture above was the before design idea of the bleachers. 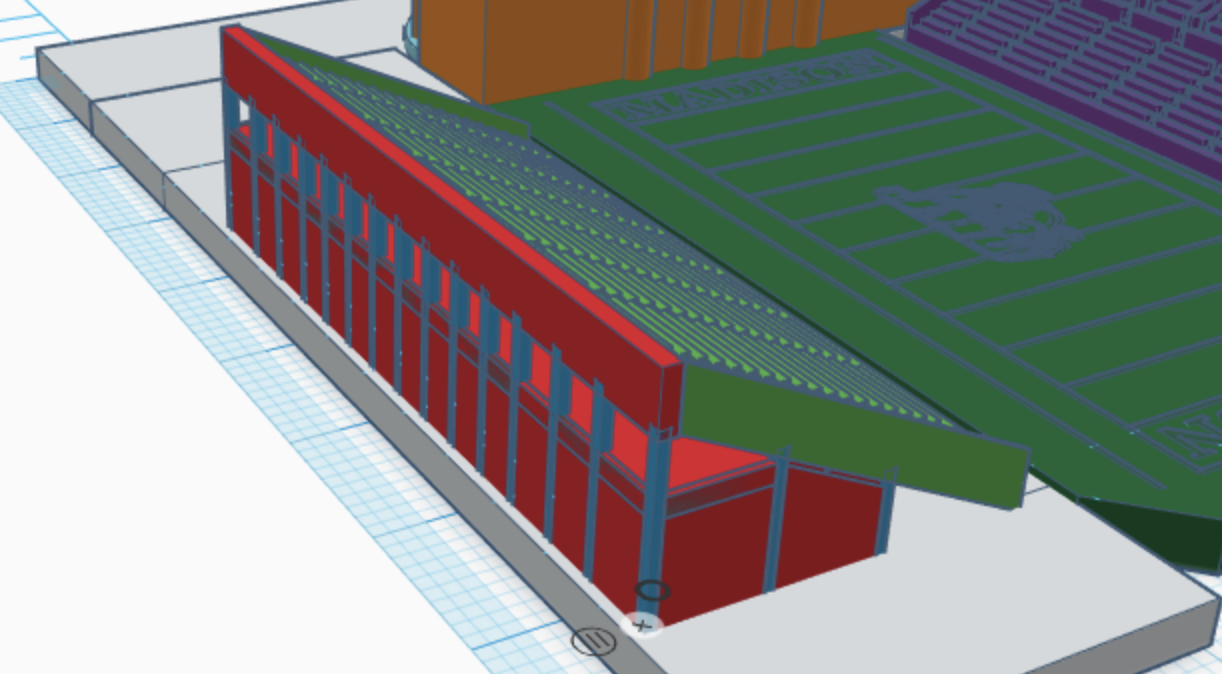 This was our new design for the bleachers shown above.

We had to change the bleachers as part of our design process. The machine did not print the back of the home side student section bleachers, so we had to redesign them. Instead of leaving them as hallow objects, we had to give it its own support underneath with rectangular prisms. And, we have to adjust the overhang bleachers as well as we move forward in the project. And, pillars were added in as a layer of detail.

Another smaller change is how the base of the print will be made. The first print used a raft to print, which is a sturdy base. Instead of using a raft for the next print, we will use a skirt. Then, it will not have a clunky base.

The last change was making the size of the print bigger so the letters and duke dog could print more legibly. 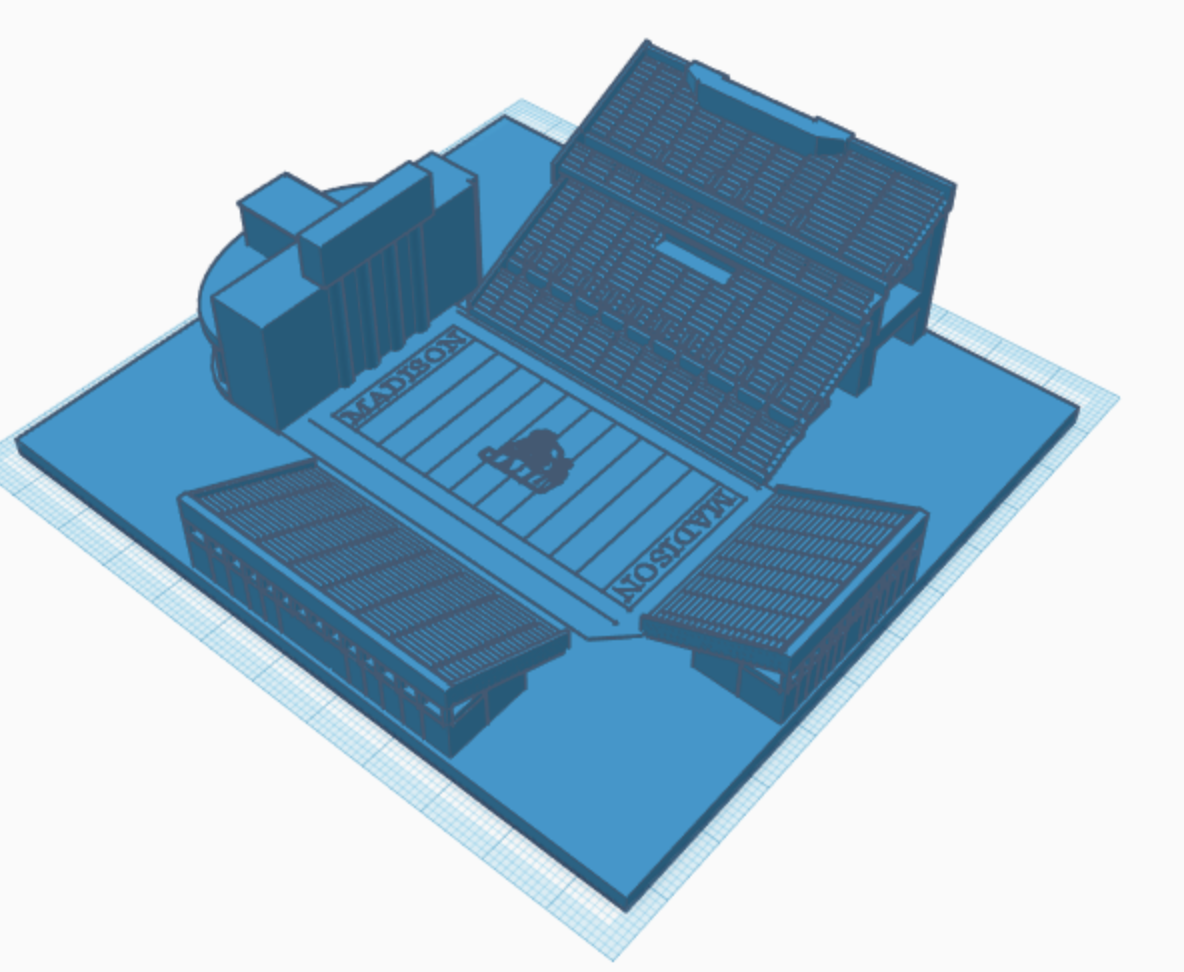 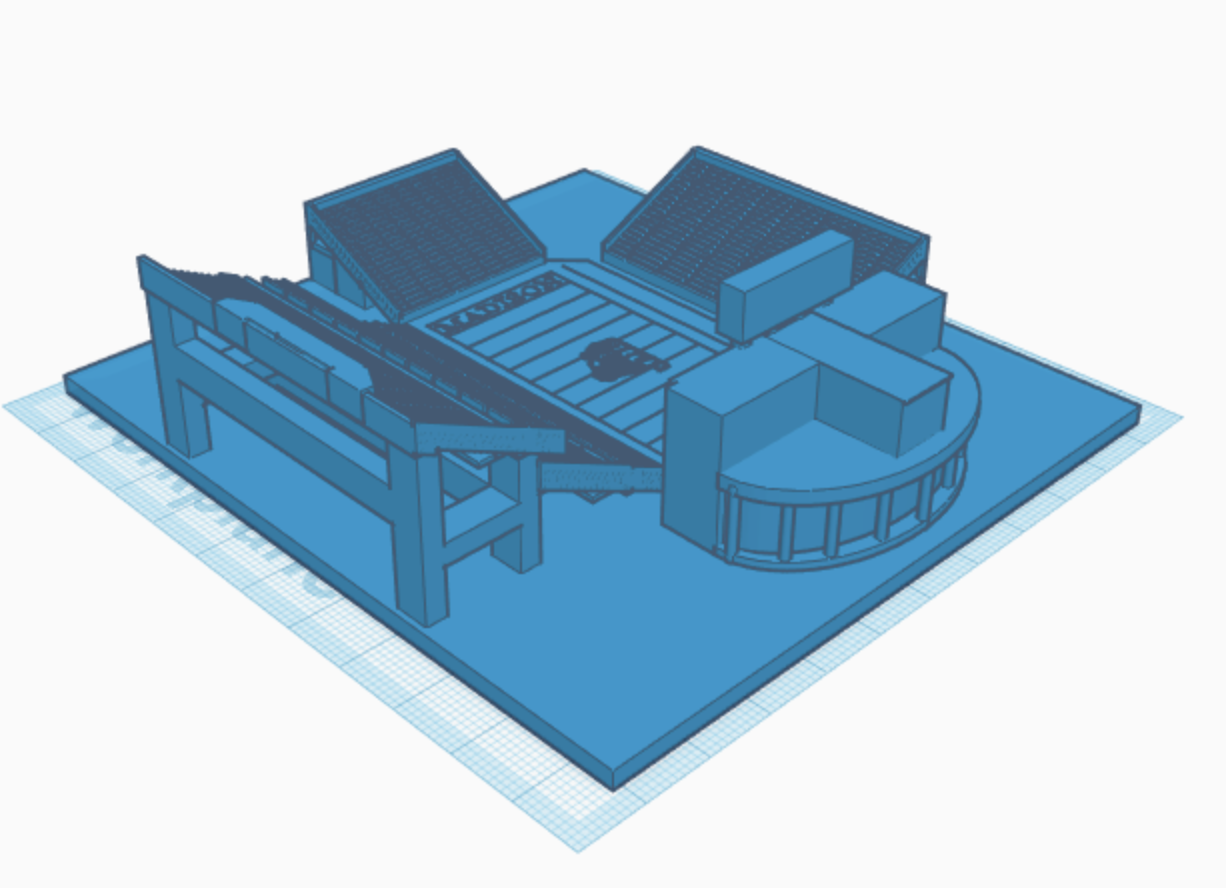 This was the final blueprint in Tinkercad for the design.

Above are a couple pictures for the final print.

In the end, the print was a success. We were able to create an accurate model of the stadium at school. A couple strengths were getting the score board to successfully stand up, the columns at the entrance were no longer buried in the support, and the home side student section had it’s back with the poles in the final print.

An area of improvement would be getting the overhang to not have the support. We were not able to generate a way to have the overhang stands without the support under the bleachers. A way to improve our model would be to print the bleachers separately with support. Take off the support. Then, add in small rectangle holes at the bottom of the field to place the stands into. This way were are now able to at least take out the layer of support at the bottom. However, it still leaves the support in the middle as a challenge to get out.