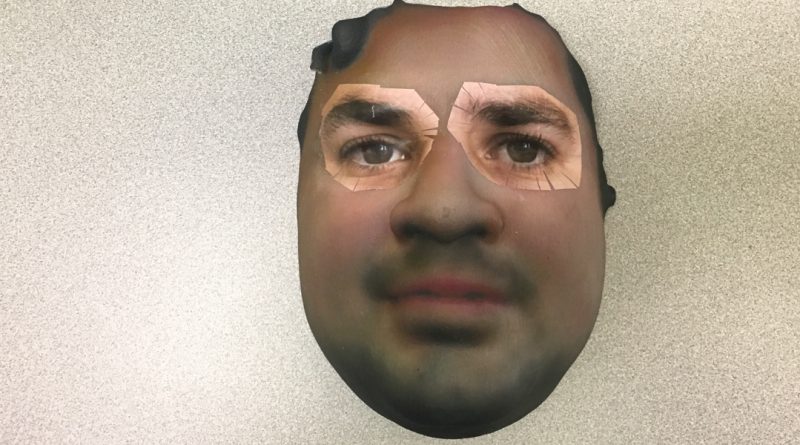 As we continue to experiment with different methods of how to make our mask look more like James, we ran into a a few issues regarding the eyes. As per our previous posts, we have been trying our best to get the proportions of the eye region to match that of Jame’s face. However, before we get to that, we realized that we need to devise a way to make the paper print out of of James’ eyes fit to the shape of the mask. James and Madison devised a simple technique. First, we cut out the entire eye region, including the eyebrows, into a relatively circular shape. Then, using scissors, we made small cuts all around the perimeter of the eye (as seen in the picture below, on the right). Through this method, it allowed the paper to conform to the shape of the mask. We then attached the eyes utilizing a combination of double-sided tape and glue sticks in a fashion that would allow us to attach and detach the eyes without causing any damage to the mask.

After attaching the eyes, and making sure that they were as close to the correct angle and positioning as James’ face, we tested the mask with the iPhone. Unfortunately, this was another unsuccessful attempt. At this point in time, the phone recognizes the mask as a face but not the face that is needed to unlock it. In testing the mask, we tried various methods before we began brainstorming our next steps. We tried getting the phone to unlock it with someone simply holding it facing the mask, we tried it by laying the mask on a table, and finally by having James and other group members place the mask on their face, which is pictured below.

By sending our previous file off to Shapeways, we hoped that we would be able to improve on our previous ventures. Upon receiving the new mask, we discovered that we would once again have to use 2D printed eyes on the mask. We’ve discovered, through James using his actual face, that the iPhone software requires a more defined eye area, even with the eye recognition safety option turned off. Interestingly enough, he could simply close his eyes and still get into his phone, as long as the safety feature was still off. We discovered this by having James using his phone on himself while using his other hand to cover up his eyes. The phone did not allow him to get in. However, we found that he was able to unlock his phone when using a hand to cover up the other parts of his face.

Once again, a majority of our work has been centered around getting the scale of face-to-mask as close as possible. Using the same methods we have been using on the previous masks, we have been working using ratio’s. Through the calipers provided by Dr. Taalman, we have continually been measuring the mask as well as the eyes so that we make sure that we are getting accurate dimensions. The trickiest part of this has been the positioning of the eyes. While they may be the correct distance from each other, the angle of each eye may be incorrect.

New eyes on our latest mask

Once again, the iPhone’s software has rejected our newest attempt to trick it.  As far as the mask is concerned, we feel as though we will have to address the mouth on the newest sandstone mask. We feel as though that it may need some more definition and depth in order for the facial recognition to pick it up. As we are coming down to the wire, we remain confident that we will be able to create a mask that can finally trick Apple’s software! We will continue to work on our end of semester video, which will wrap up all the hard work that we have put into this project.