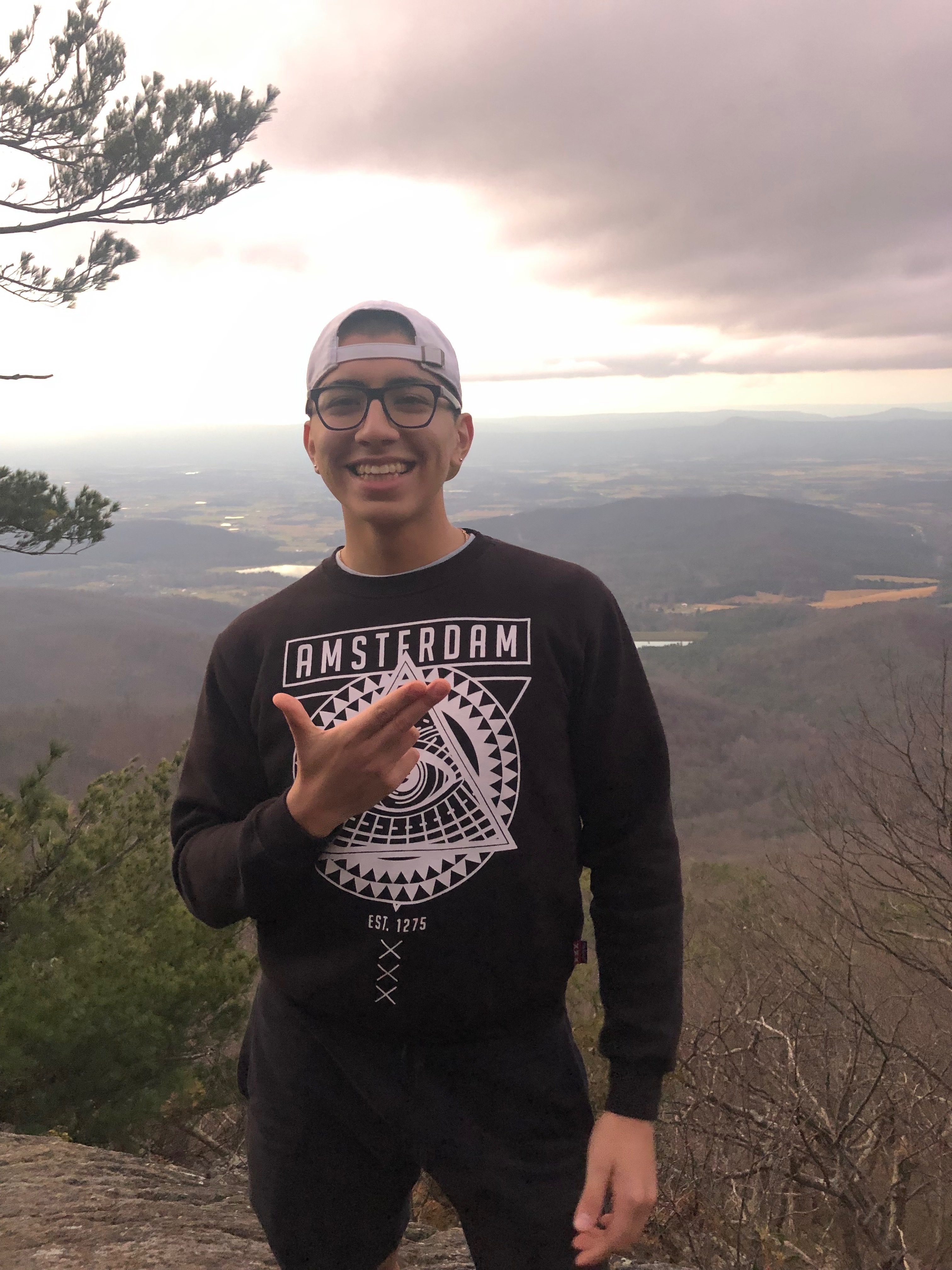 My name is Adrian Michel and I am a Business Management Major with a minor in Computer Information System. I am the first person in my family to attend college figuring out life one step at a time so that it may be a little not easier for my little sister.

My favorite color is white and gold. I have brothers, sisters, and a very loyal dog with a very big ego. I don’t consider myself a stereotypical nerd but my hobbies say otherwise. Its not uncommon to find me playing video games or reading about current global news in my free time. I am a social butterfly with a broad range of friends from different places and groups. I love making music and making my friends laugh.

I do not have much 3D printing experience at all, but my goal is gain enough expertise to learn on my own after this class.

I chose this item because it is a simplistic yet very practical tool to read. I am a very avid reader and I think this book holder will just be fun to use even though I do not necessarily need it. I will be able to read lying in different positions instead of having to sit up because the book holder gives one the ability to. 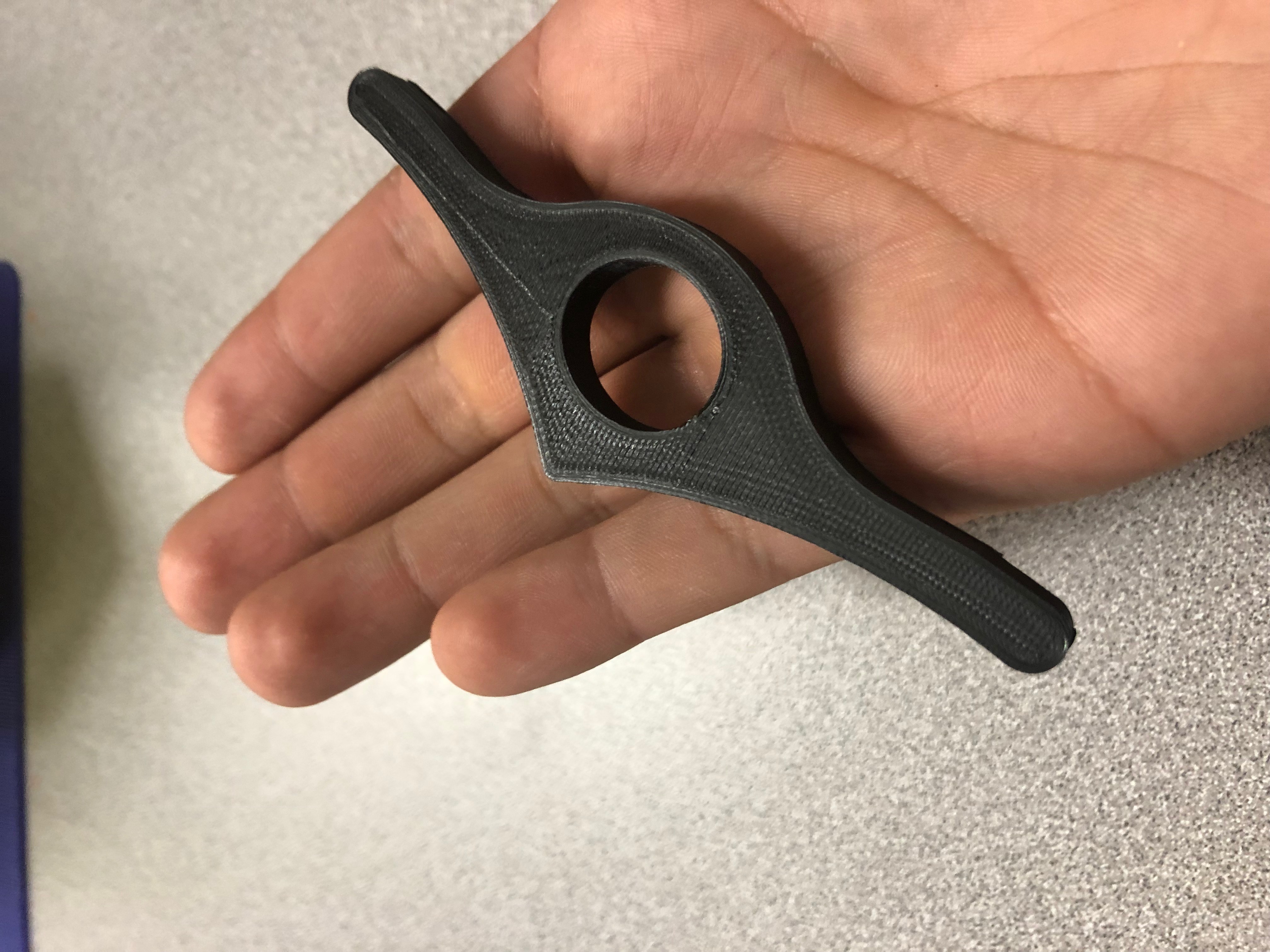 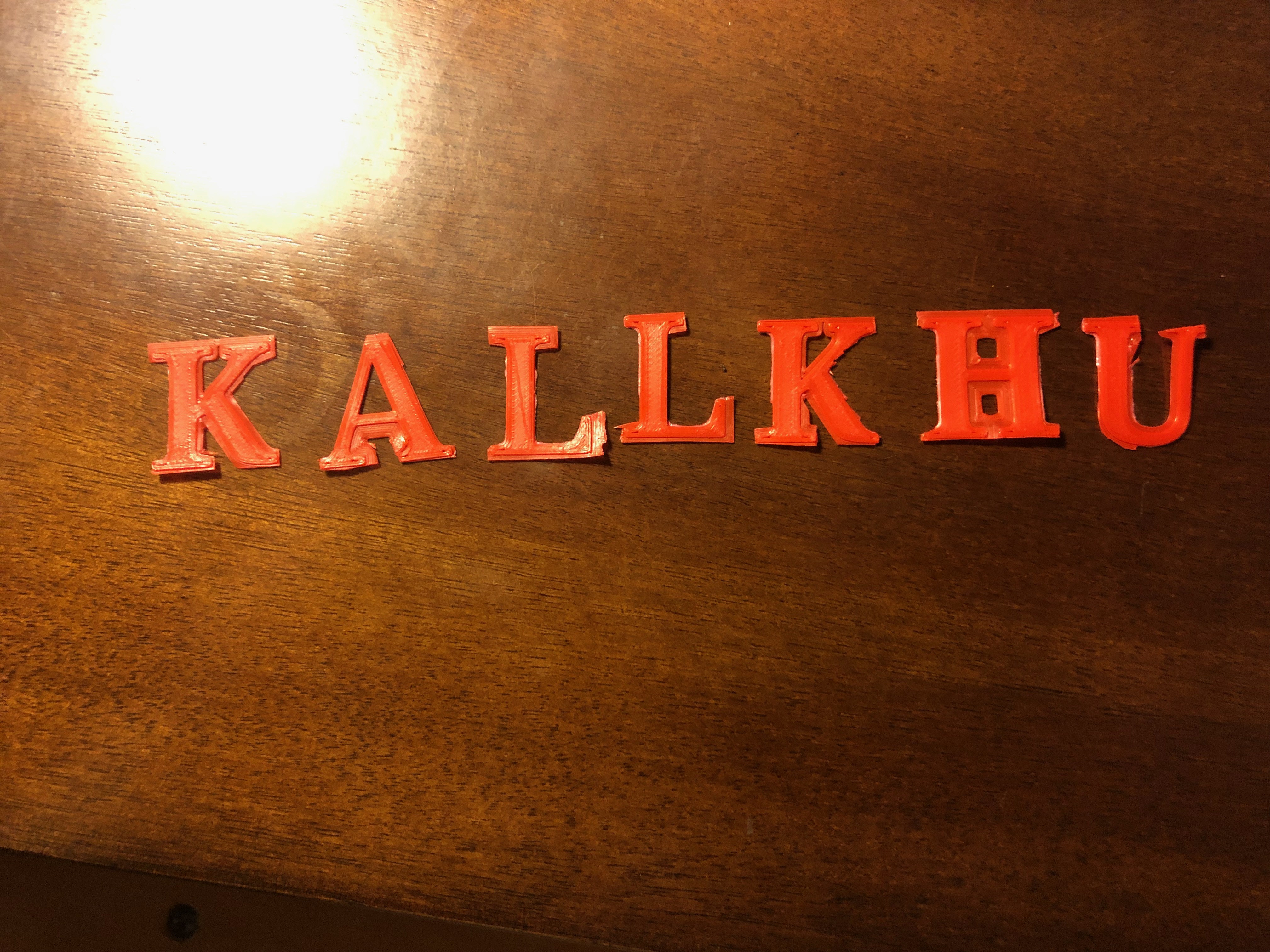 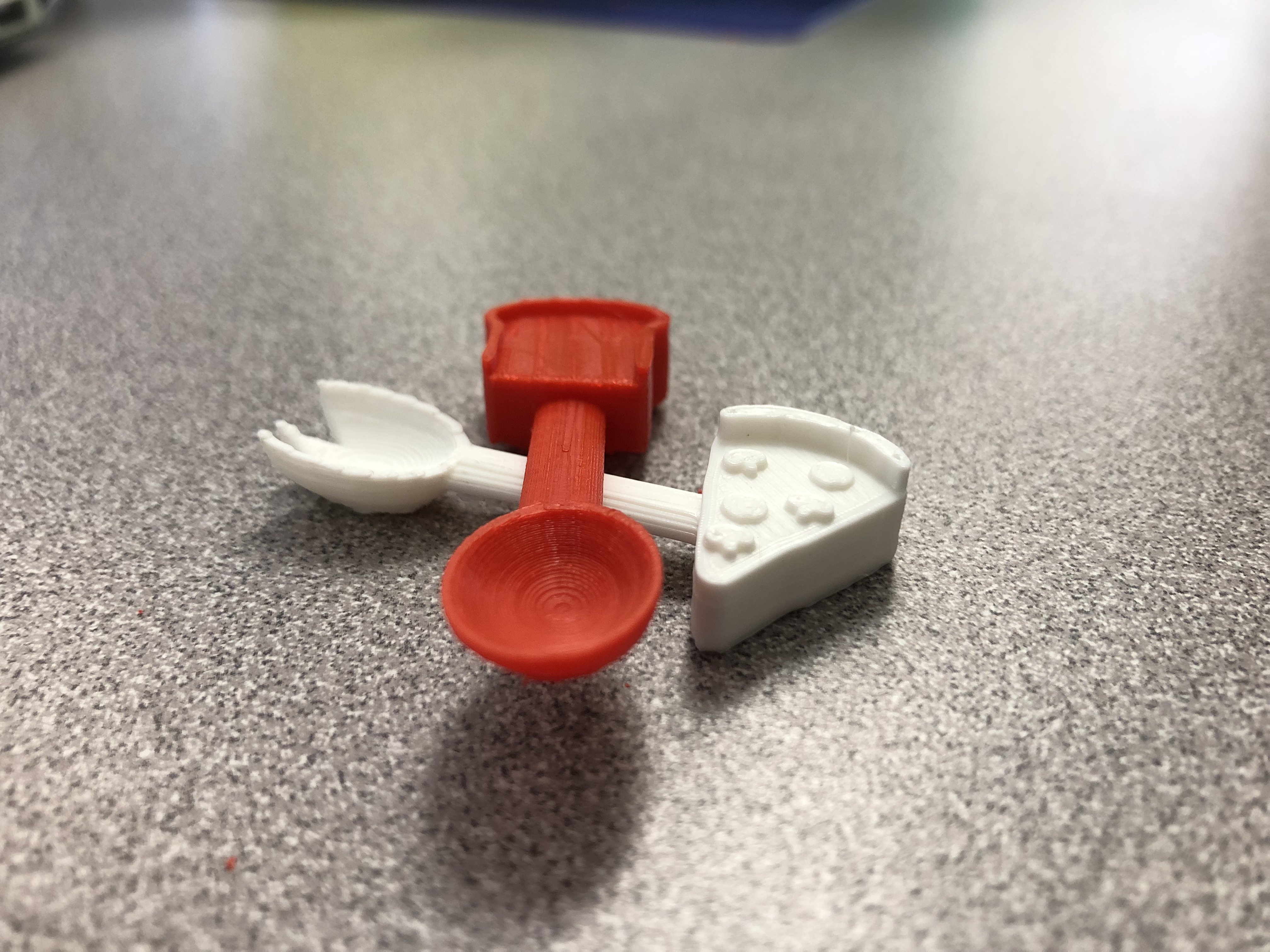 The project involved some planning due to the round shapes of each utensil. We were hoping that the first we our project would be successful on the first print, but it turned out we lacked supportive structure due the different heights at different places of our objects. The support and adjustment in detail allowed for a successful final print. 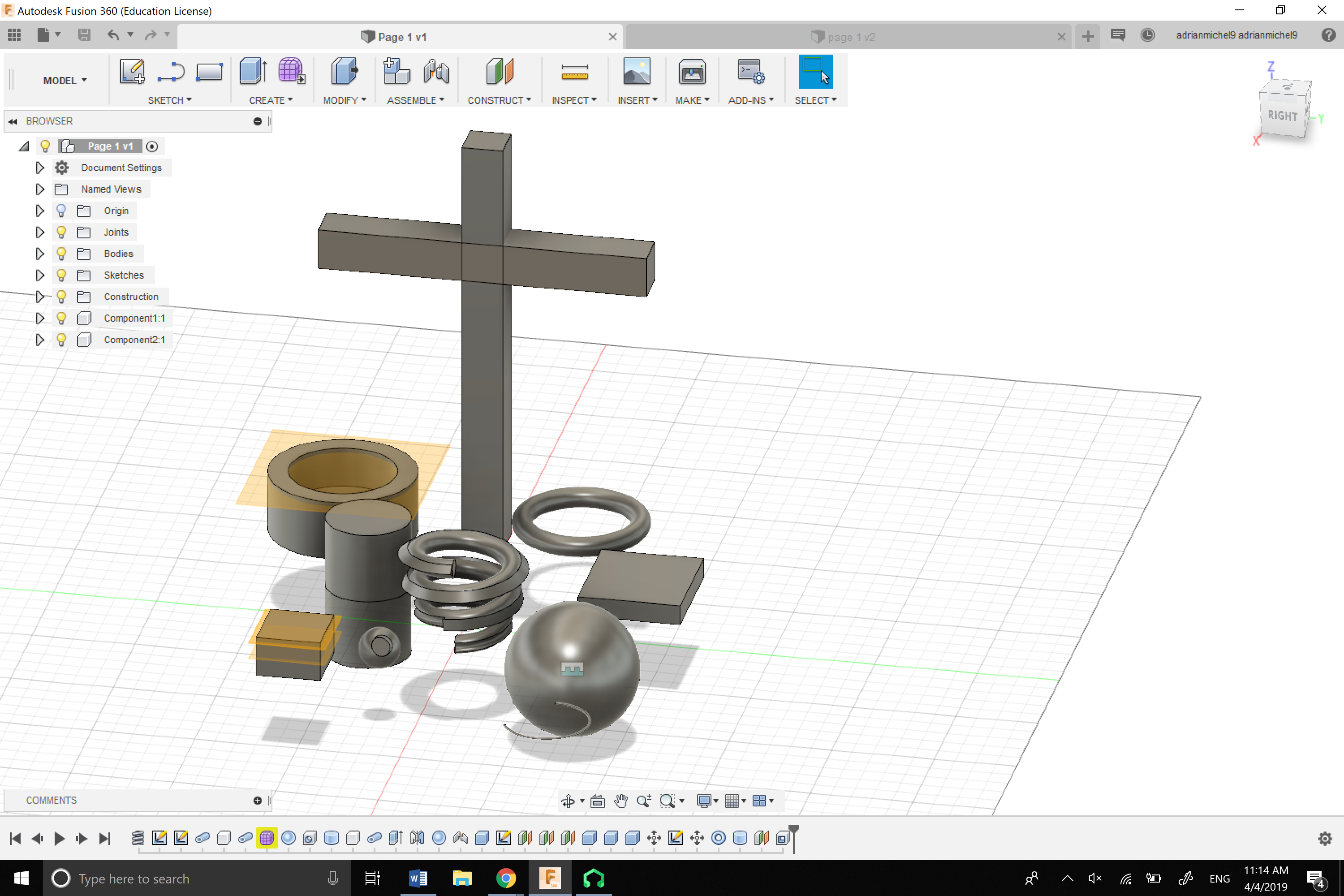 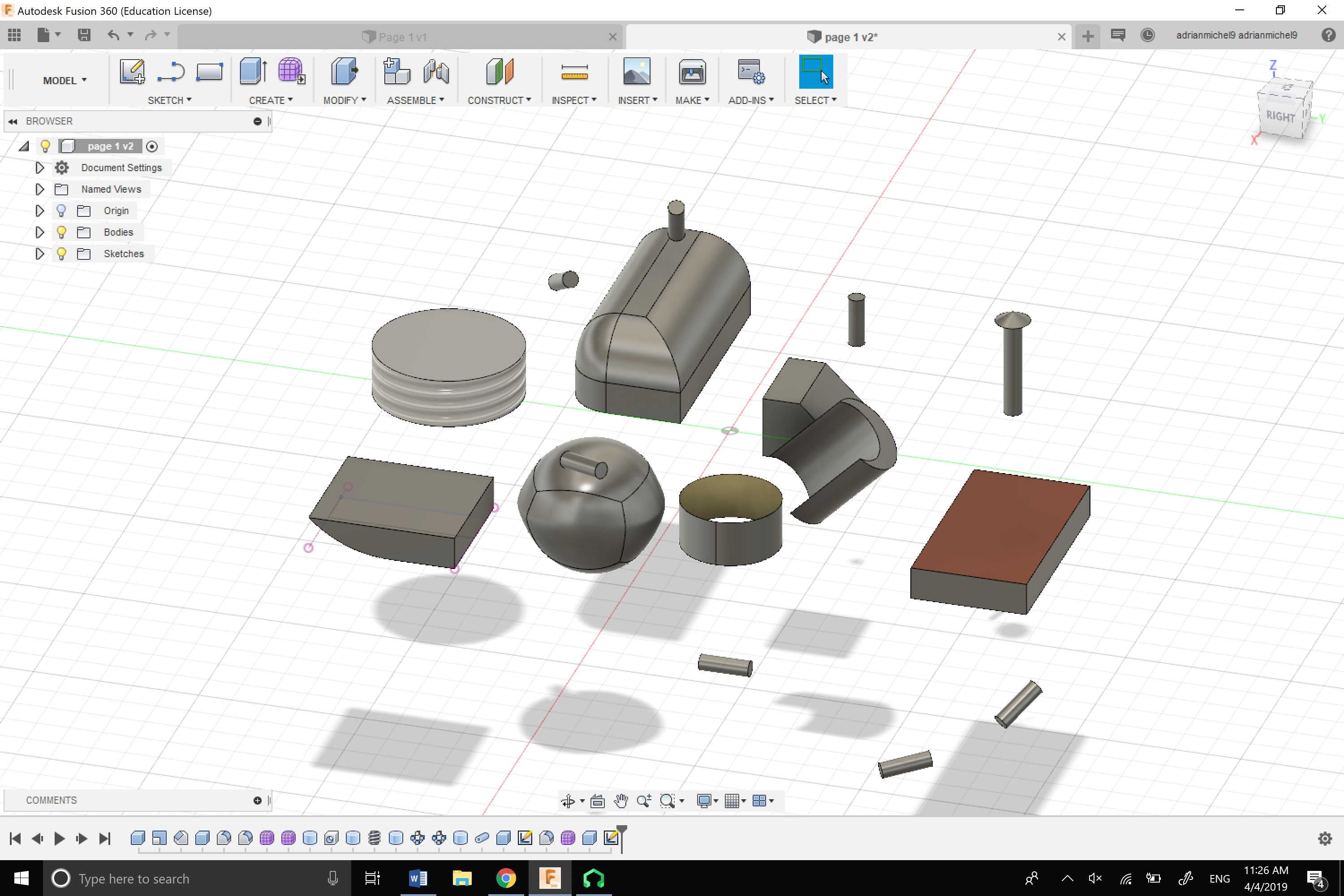 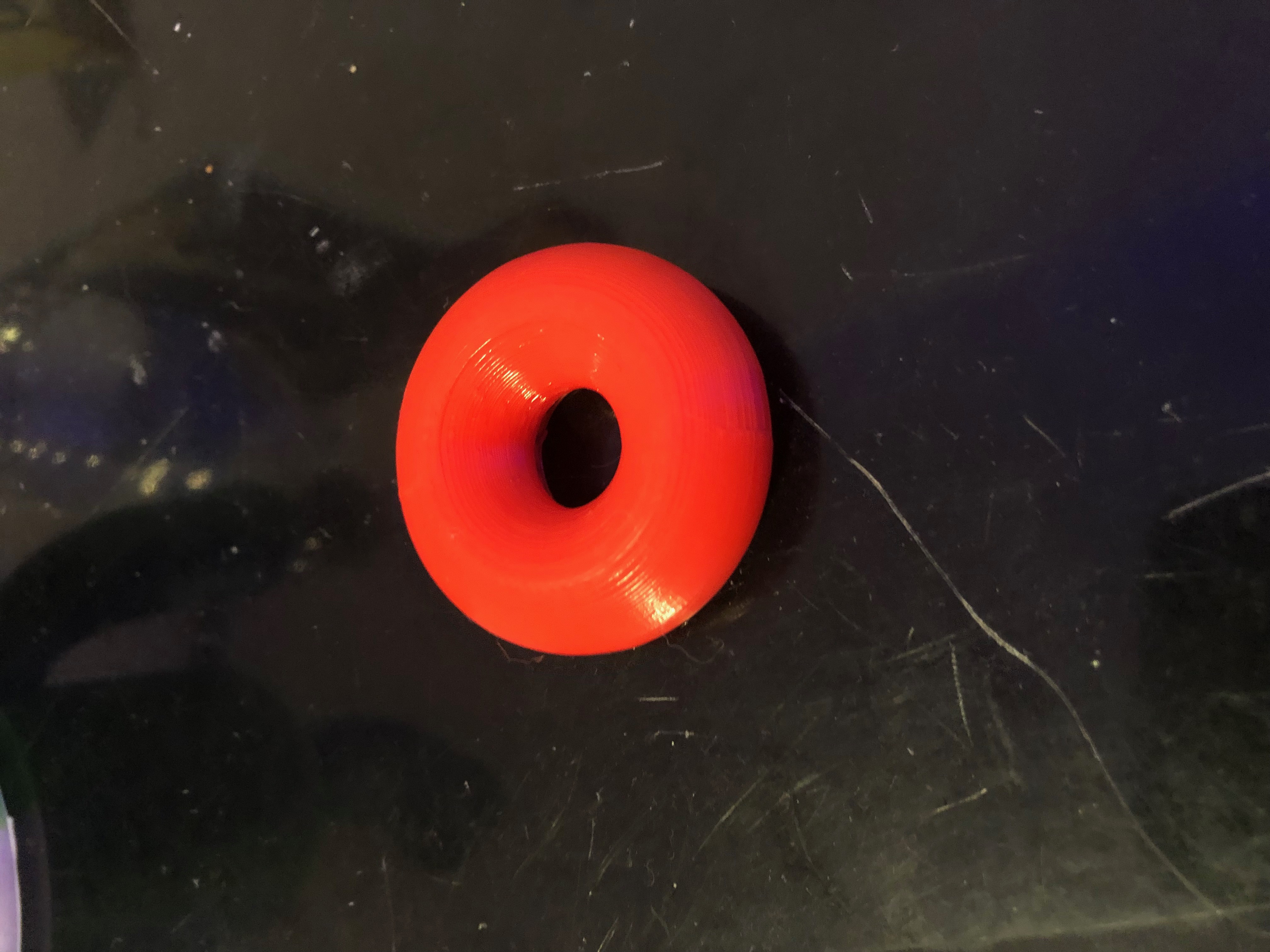 The print was a success. It came out well the way I wanted it too. 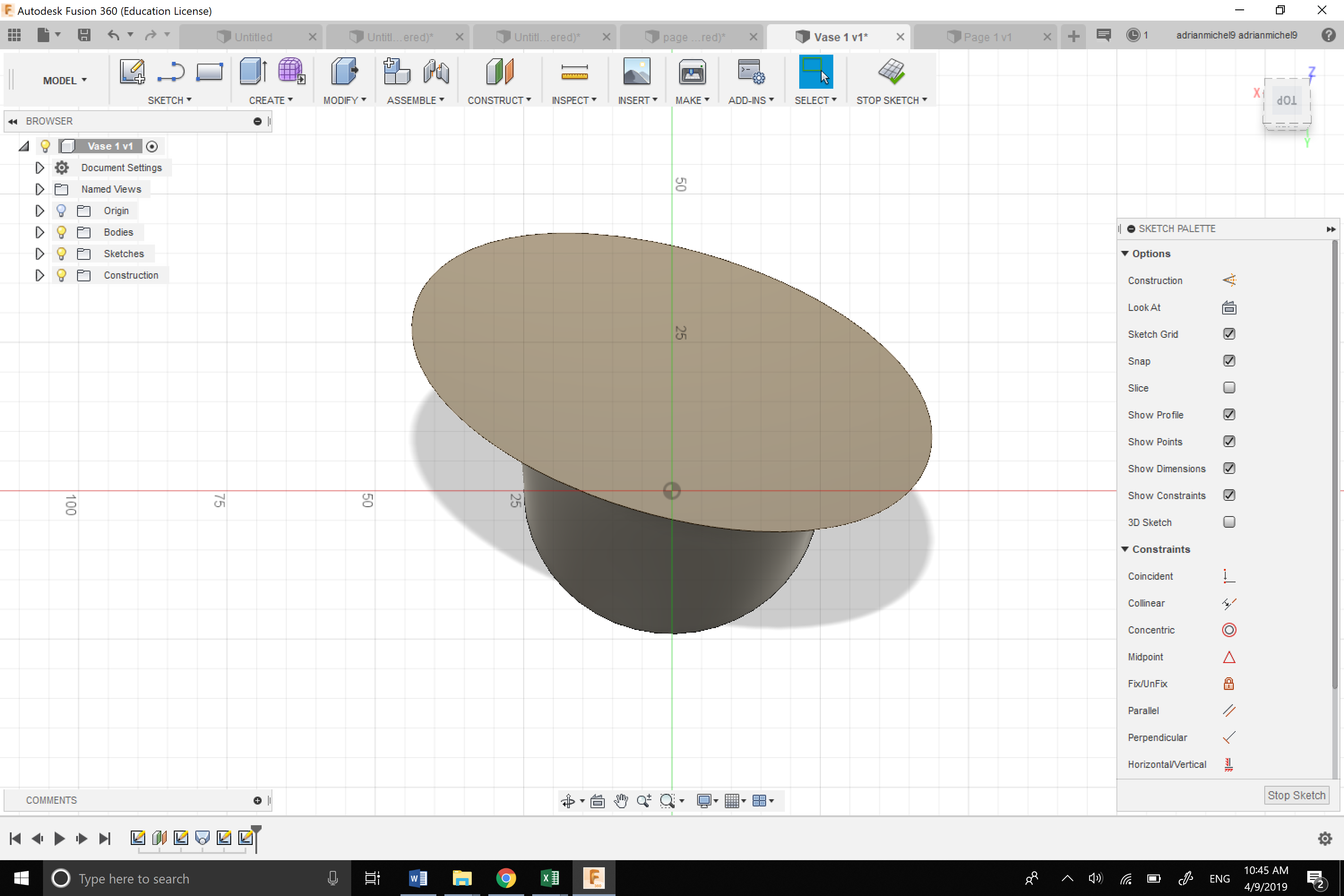 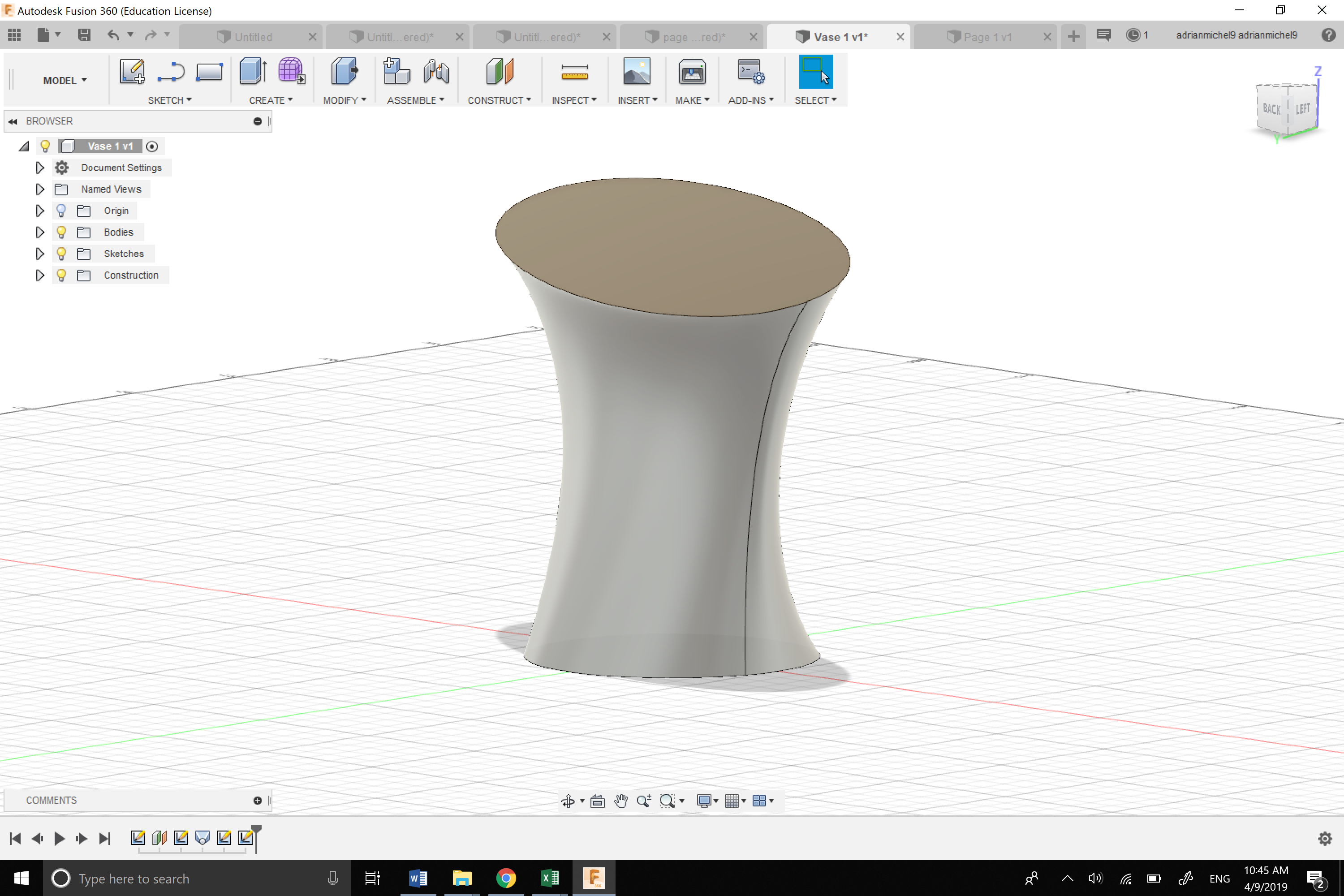 After watching the video, I realized that I did not like the appearance of the flared out edges at the top of the vase. I wanted to create something smooth and interesting to look at. I sketched a circle for the base. I then offsetted the width of the sketch increased a the width and raising that platform. I then sketched an ellipse on the offset platform. This is where my design differed from the video. I rotated the ellipse so that one side of the vase dipped lower to the floor than the other side. I then narrowed body so it has somewhat of an hourglass figure. 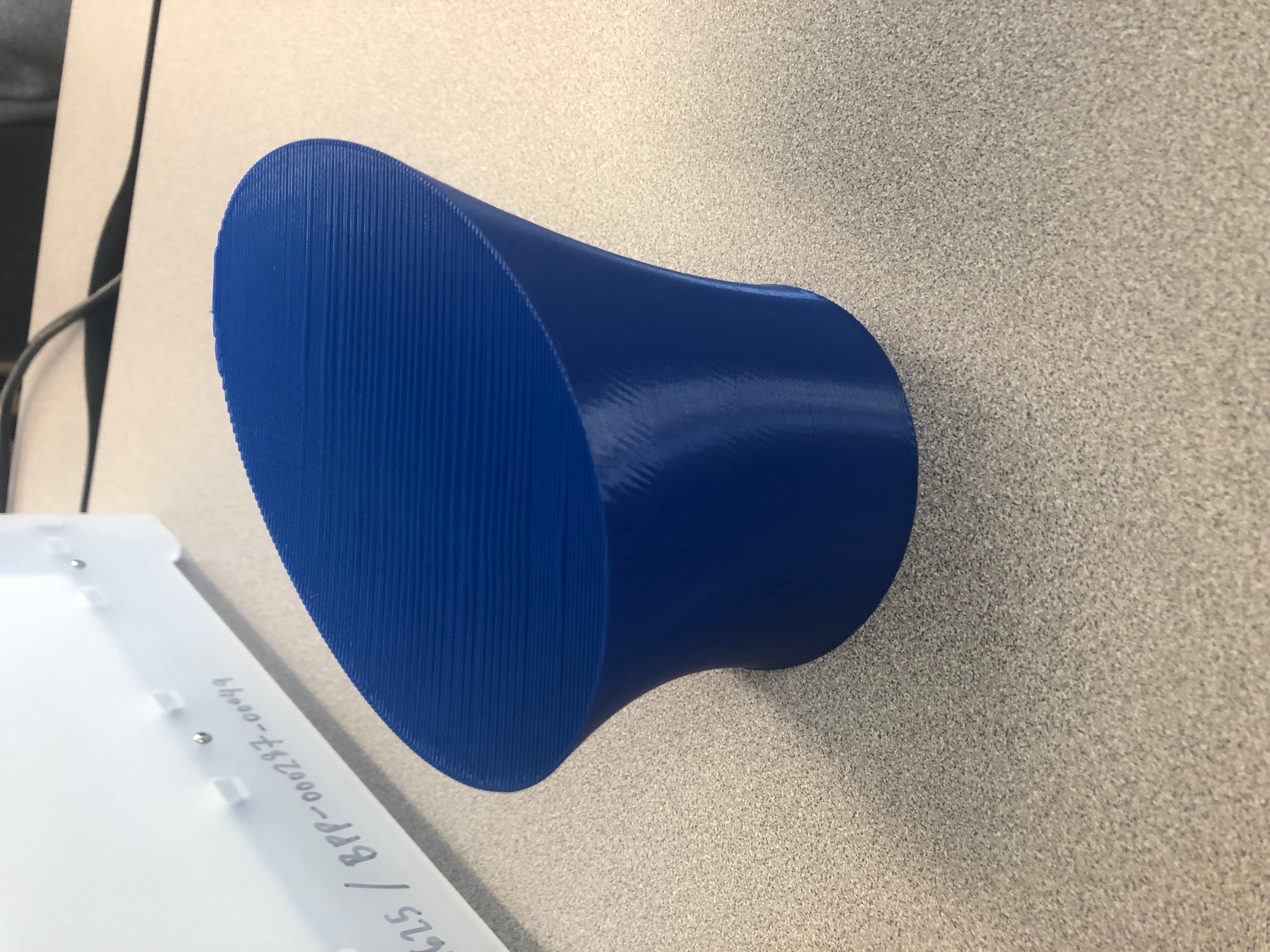 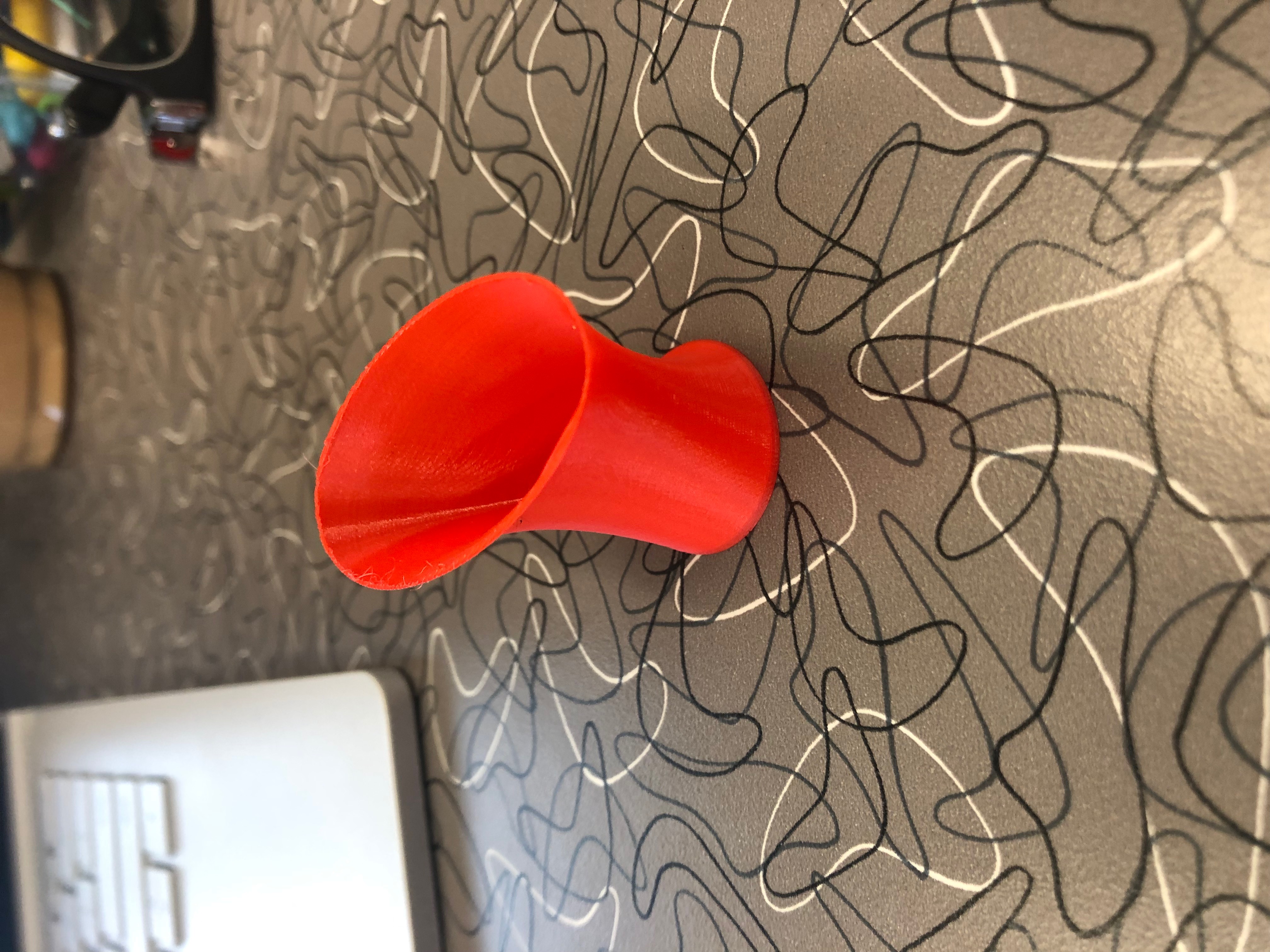 The first larger scale model of the print was a failure. For some reason the print came out messy. I changed the model a bit and the degree the top part of the vase was turned. After two tries the vase came out almost perfect. As seen in the picture, the top is covered with a web-like lid which was completely not intentional. The spiralize option from the slicer program most likely caused the printer to make each strand when making the top. 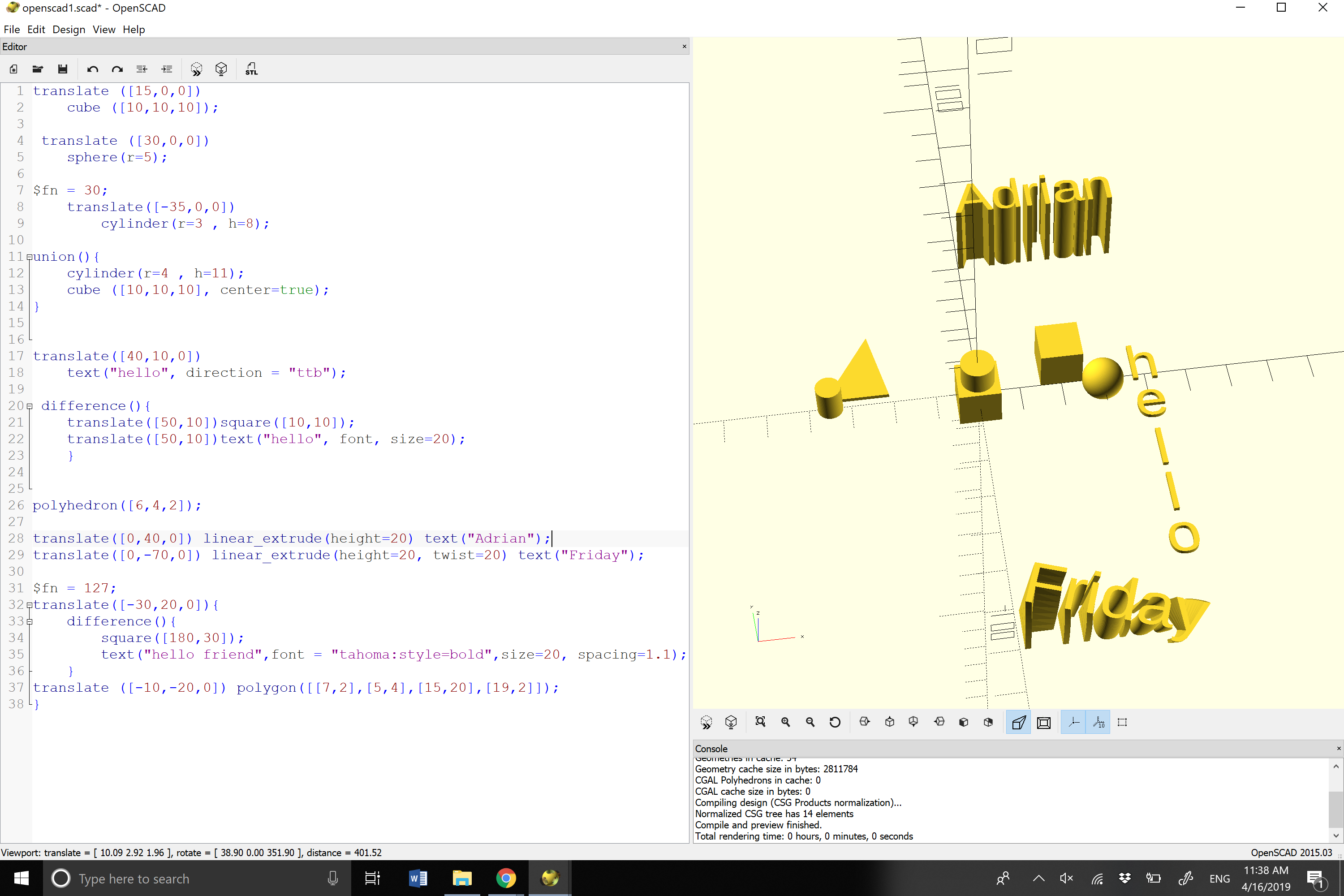 I made a cube and a sphere using OpenSCAD’s built in functions. I made a union between a cylinder and cube in the center by using “center = true.” I made an irregular triangle using the polyhedron function and picking my coordinates.  I made a cylinder with the built in function. I created “hello” in text going down vertically using the text function and changed the direction using “ttb.” I made my name using the text function and added a linear extrusion to it to make it pop out. I made the word”Friday”with the text and linear extrusion functions added a twist. 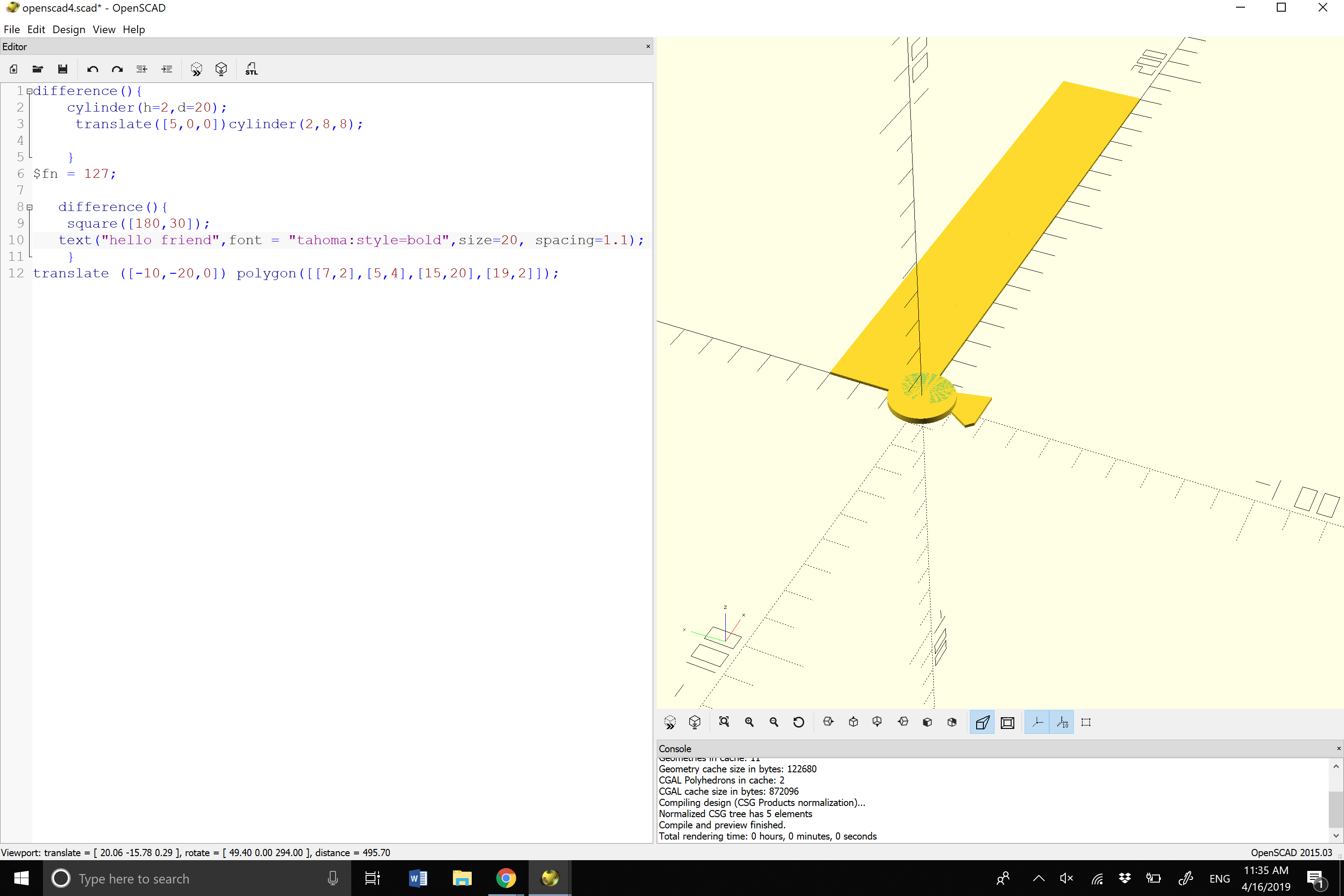 I made a moon like object by using the difference function by taking a cylinder out of another cylinder. I made a name plate by creating a rectangle and a piece of text within it (it does not show unless I use preview). I then made a weird shape using the polygon function. 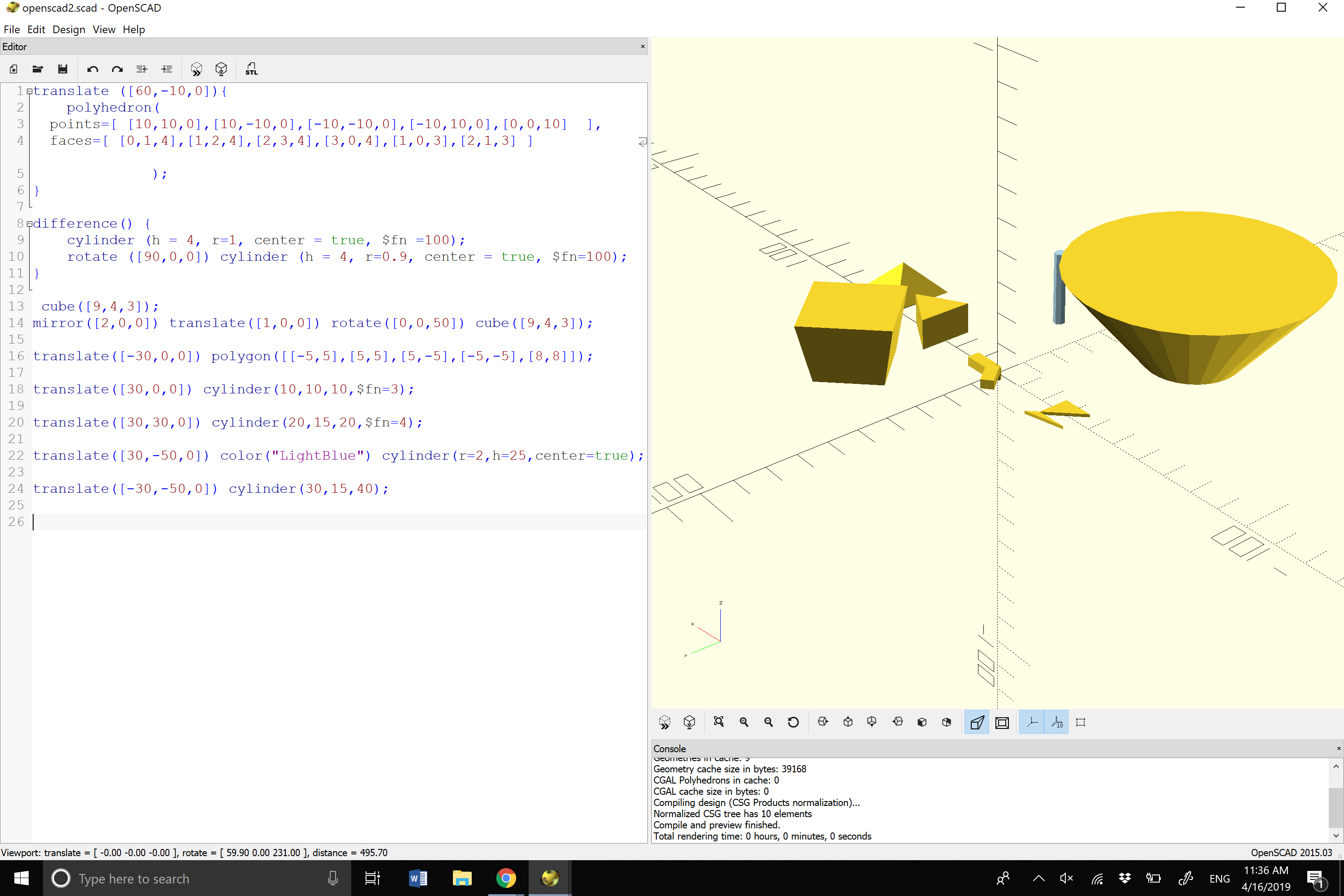 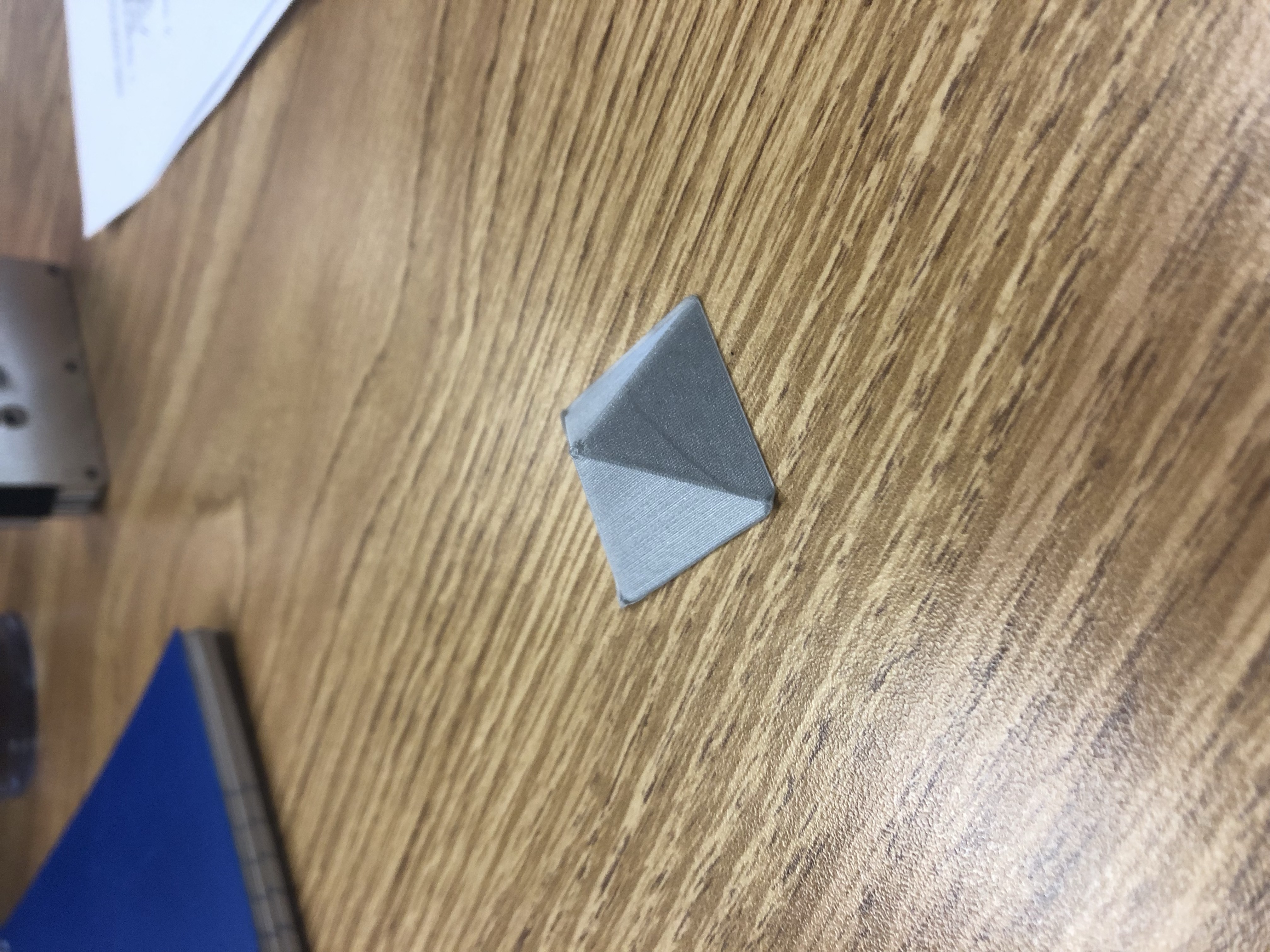 The print was a success. The pyramid was almost entirely smooth except the point at the top. 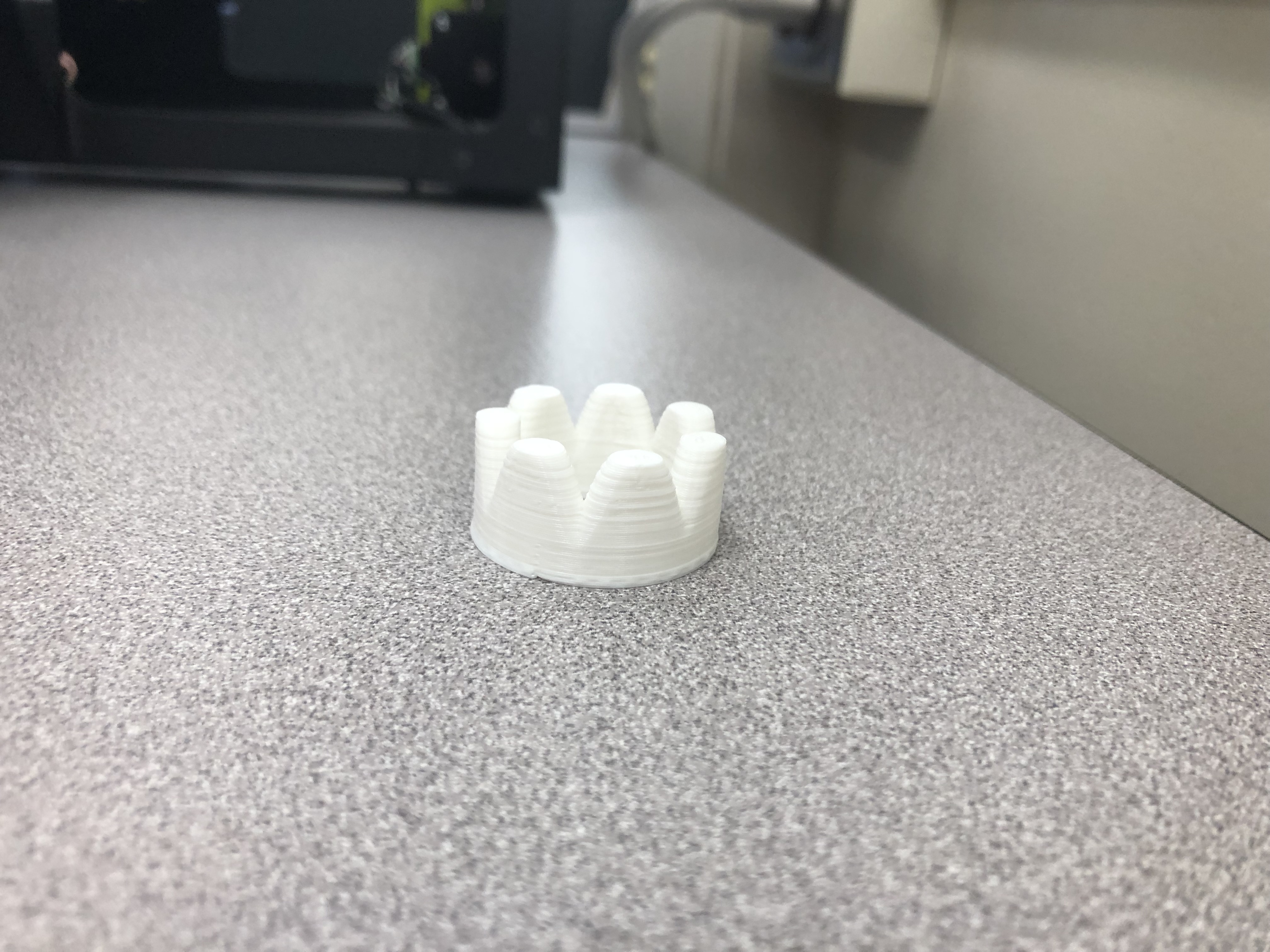 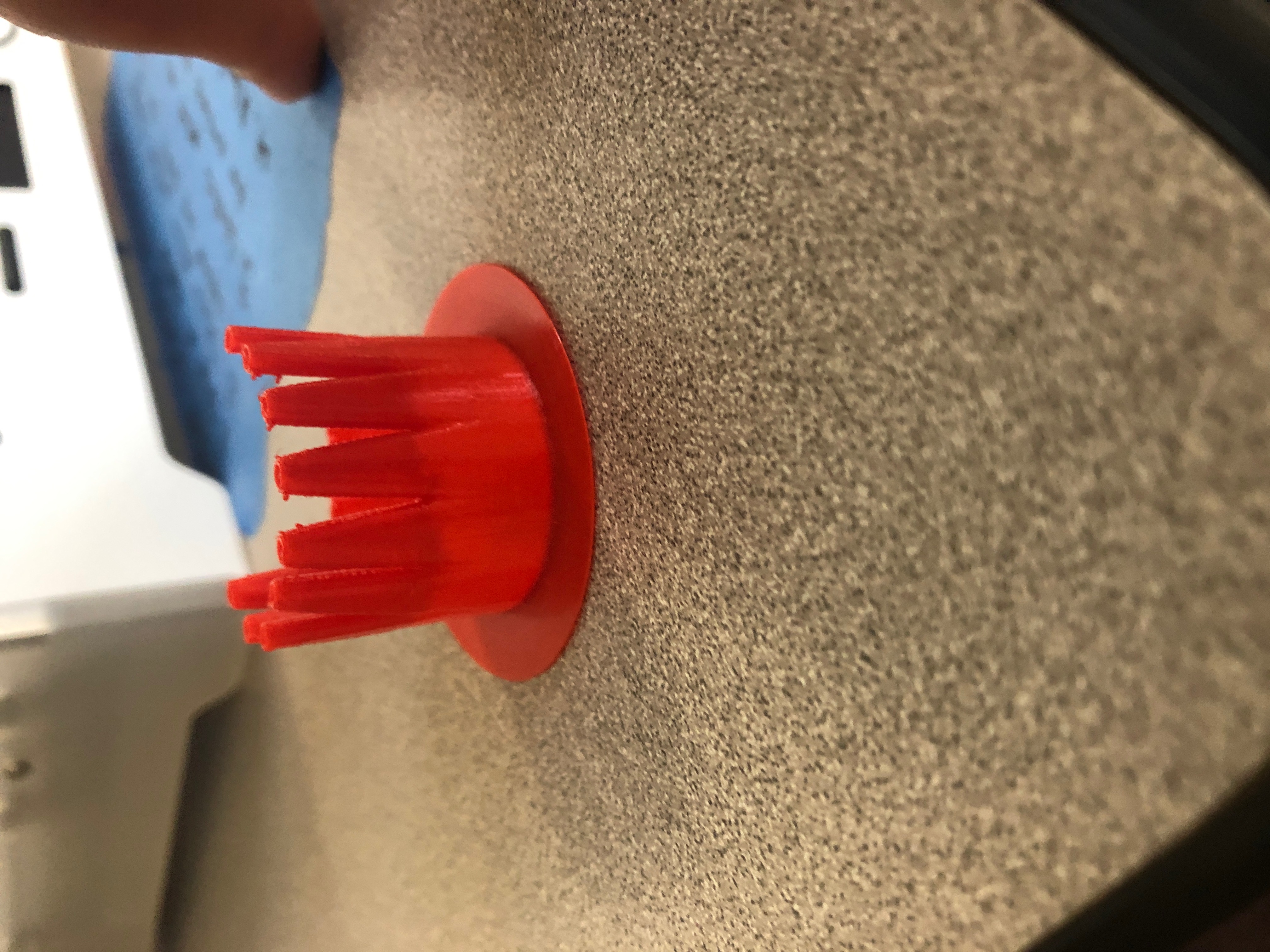 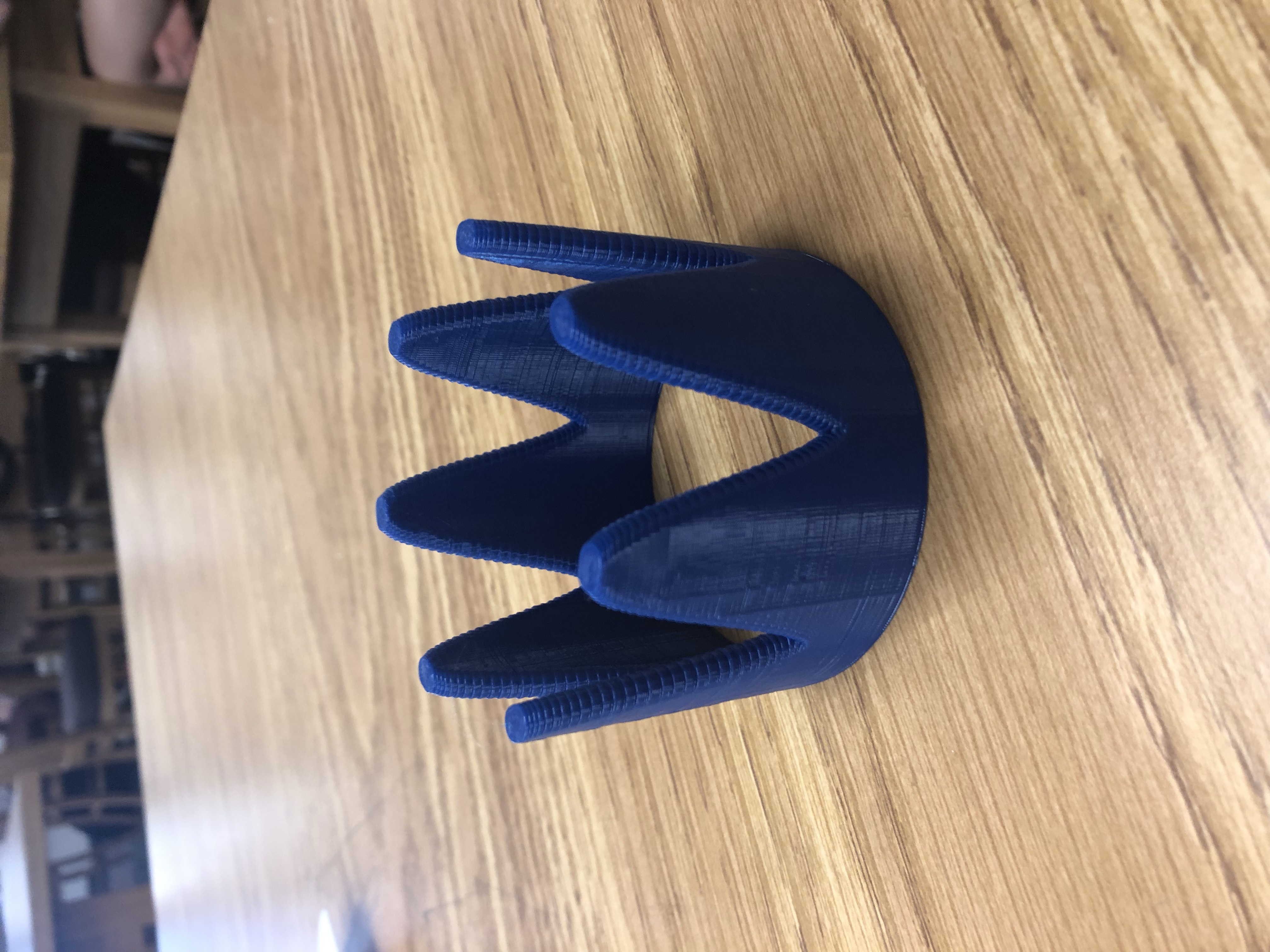 The project idea came from looking at the different math functions in OpenSCAD. It was fun figuring out how to use sin and cos to create the crown. It took a lot of guessing and error in the code to figure out how to make the circular shape. Overall it was fun once the code made sense. The only problem that arose was understanding why the rendering of the crown took long. The crown is made of thousands of cylinders and OpenSCAD took a long time creating each individual cylinder. This project taught me how to implement formulas from paper into code and how to learn from my mistakes in the printing process.

Throughout this course, I expanded my knowledge not only in 3D printing, but in how to search and find information on my own. I used internet to teach myself more complex techniques within each of the programs we used during this course. The guidelines in each assignment were flexible enough so that they were fun. I struggled learning how to use Fusion 360 at first, but after some time playing with the tools on my own I was able to complete assignments quicker and efficiently. I also had some trouble when it came to using Cura and the 3D printer, and I have learned from my mistakes what not to din the future and what to avoid. I now have a baseline knowledge to 3D print on my own and to expand even more.

In the future, I want to able to make tools or shapes that for my bike or GoPro. I would have to measure the dimensions of the camera and where it would connect to bike. It would be cool to have enough knowledge in code and 3D printing software to make any idea real. I would code