For my ring design I wanted to move away from a meshmaker design and work on the shape of the ring. I struggled for a long time to make this work however. My original idea was to make a wave shape, however as the process is complex I decided to simplify it to a mountain design with three peaks. 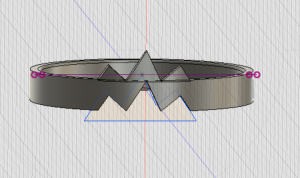 My original attempt at making the peaks started in sketch, where I added seven dots to act as the locators for my peaks. The issue with this attempt was that I was not able to move the dots on the circle without relocating the whole circle, thus making it impossible. After that, I attempted making the mountain shape, and working off of that to create the ring. However, again I was not able to centralize the ring from this process. At one point in the process I attempted using the create form, which lead me to a phase of purple confusion. Finally I had a meeting with Laura on how to go about making the peaks. After toying around for a while, trying to alter the shape of the exterior circle in sketch form, we came to the conclusion that the best way to make this ring would be a cut-and-sew approach. I took the original ring design and traced the peaks, starting from the bottom up. Before extruding that sketch on the ring, I copied the original and moved it out of the way. The I extruded the mountain image over the ring, and cut the shape from the ring. this gave me what would become the upper part of the ring. I then moved it up, and moved the copy of the ring back over to its original location. I matched the upper peaks to the ring, moving it .09 down so that it overlapped a little with the ring to insure that it would print on the ring. I then extruded the mountain shape again, in the same location I had first, to remove the lower part of the ring. I used hole instead of cut so it would take away that part of the ring rather than erase the ring as it had done before. And then I did a test print! It printed pretty well (thankfully!), as long as I printed with supports for the peak. 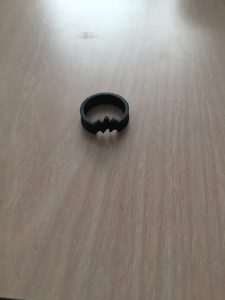 I ordered my ring in the black Nylon as a test to see how it would print from their printers, and will reevaluate if I want a metal one on how that ring looks. It was shipped out on the 12th and arrive at the estimated date of arrival. 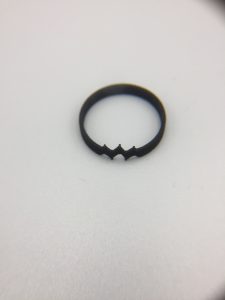